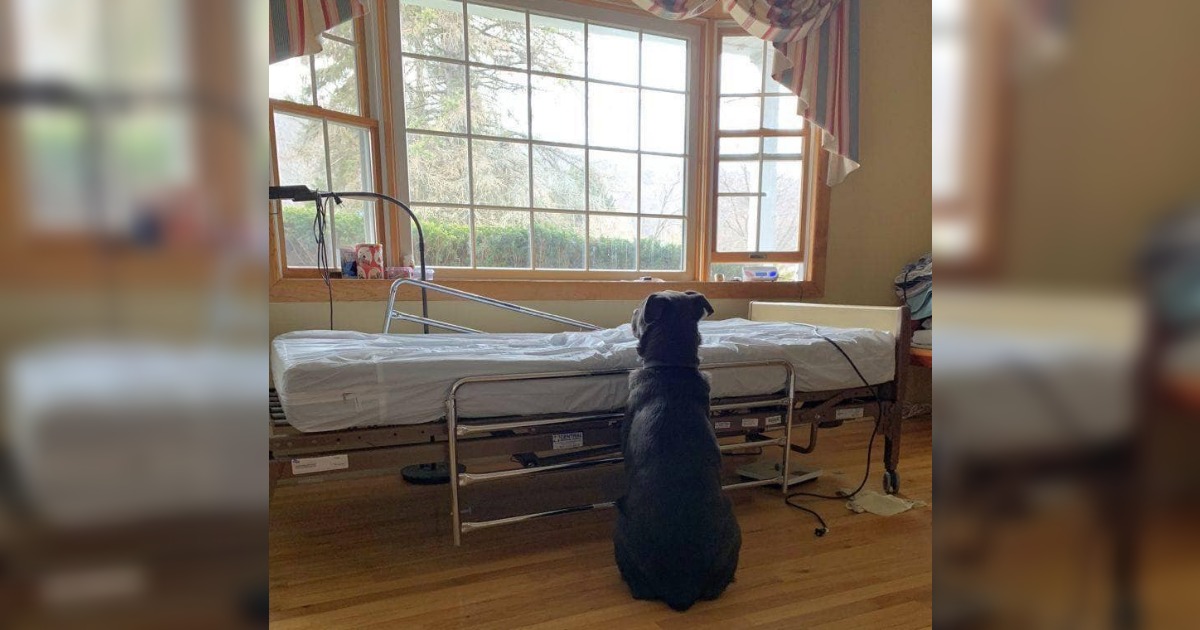 Recently, a photo of a dog attracted attention and the reason behind it is heartbreaking. The picture shows Moose, a 3-year-old Lab mix, sitting next to an empty hospital bed waiting for his owner. Unfortunately, his human will never return.

Moose was seen last week quietly waiting by his furdad’s hospital bed in this heartbreaking image posted by NorthStar Pet Rescue. The dog appeared to be awaiting the owner’s return without realizing that his owner had lately passed away from cancer.

He’s not coming back.

Moose was returned to Eleventh Hour Rescue, the shelter from where he had been adopted a year earlier.

“Eleventh Hour Rescue’s adoption policy is that if an adopter cannot keep one of our dogs for any reason, the dog must come back to us, and so Moose did just that. No matter how crowded we are, we always make room for one of our own,” the shelter said.

The shelter also shared how they found Moose.

The dog was discovered tied to a railroad sign in Georgia in 2017. He spent many months in a local shelter before being sent to Eleventh Hour, where his recently departed owner adopted him.

A request to “help his heart heal” was included in the widely shared Facebook post that referred to Moose as “a sweet happy boy by nature.”

He needs a family now more than ever.

“Moose is currently being loved and cared for at the EHR Kennel in Randolph, NJ. He is a 3-year-old Lab mix who is heartbroken, adores kids, okay with dogs (pretty much neutral to them), but not meant for home with cats or birds,” the shelter wrote on Facebook.

“If you can help Moose’s heart by offering him a temporary foster home or a permanent home, please go to ehrdogs.org and put in an application to meet this sweet, loving boy. Let’s mend this broken heart together.”

Due to the internet, Moose’s tale was shared widely across the area, and the shelter soon started getting several adoption applications from hundreds of people, some of whom had even traveled from as far as Australia!

Everyone has been waiting to see an update from Eleventh Hour, and on July 22, 2019, everyone got the update they wanted: Moose has been adopted! The decision was made by the shelter staff to pair Moose up with a family from New Jersey.

“They were one of the first applications we received on Moose. They saw the post before it went viral,” Linda Barish, an Executive member and volunteer at Eleventh Hour, shared. “So many dogs are euthanized that need a home every day that are perfectly wonderful dogs. What I hope is that it brings awareness to rescues and people will commit to adopting and not shopping.”

We are grateful to this family for giving Moose his forever home! The dog appears to be content with his new folks, and maybe a new home will help him mend his shattered heart.

Parents of 12 working multiple jobs to support their family get Christmas miracle from stranger
What do you want to get from your Secret Santa?
0 821