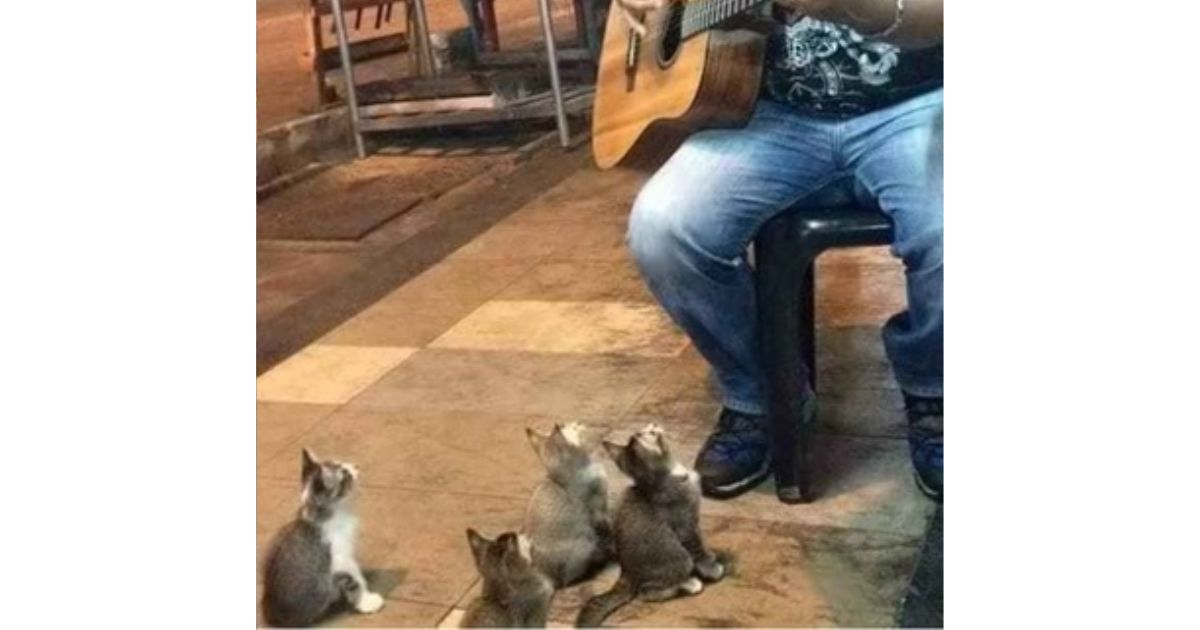 Busking is a tough job.

Many buskers are incredibly talented, but they face tough competition while out on the street.

Many buskers have to fight for people’s attention as they rush around, looking at their phones.

Buskers have to work hard to earn a few dollars.

One day, when a man was busking on the streets of Pangkor, Malaysia, it seemed like no one had time to watch him sing and play the guitar.

For lots of people, busking is their main source of income, and the man was feeling anxious about returning home after earning only a small amount of money.

But four kittens were about to turn the man’s mood upside down – as well as draw in a crowd!

A video titled, “Adorable video shows busker performing to group of kittens in Malaysia,” was shared to YouTube by Sami Hussein, and it has since gained over 7.5 million views, as well as thousands of likes and comments.

The clip shows the talented busker singing and playing his guitar whilst a small crowd watches eagerly.

It’s four kittens, and they seem to be really enjoying the music!

Despite feeling down over not making much money that day, the man had decided to sing one last song just for fun.

Ironically, as the man relaxes and decides to stop worrying about the money, that’s when his audience begins to appear!

The kittens, who are only three months old, have probably never heard the noise of a guitar before, and they’re enthralled by the movement of the man’s hand as it plays the strings on the guitar.

Although the person filming doesn’t film behind them, we can only imagine that a man singing to some kittens would quickly draw a crowd in!

Regardless, since becoming an online sensation, the busker is now probably enjoying his newfound fame – and hopefully, more people are coming to see him play.

To give some backstory to the video, the filmer later wrote online:

“My friend just finished his busking on that night but not many people heard him sing. He was feeling upset, then he sits and relaxes and sings the song just for fun. Suddenly, the kittens come and sit in front of him,” he continued, “it’s like [they] know his feeling and give him support.”

“The kittens be his audience till the end and he thanked the kittens for watching his performance.”

This truly goes to show that animals are a lot more clued up to our feelings than some people might think!

Many people took to the comments to share their love for the video, with one person saying:

“The busker was having a bad day with no one listening. For me this is a little miracle of encouragement.”

These kittens are truly the best audience the busker could ask for!

Sure, they may not be able to pay him in money, but they can certainly pay him in adorableness — they’re rich in that!

In a rare public appearance with his girlfriend Alexandra Grant, Keanu Reeves appears positively radiant.
Actor Keanu Reeves has long been considered to be a
0 160