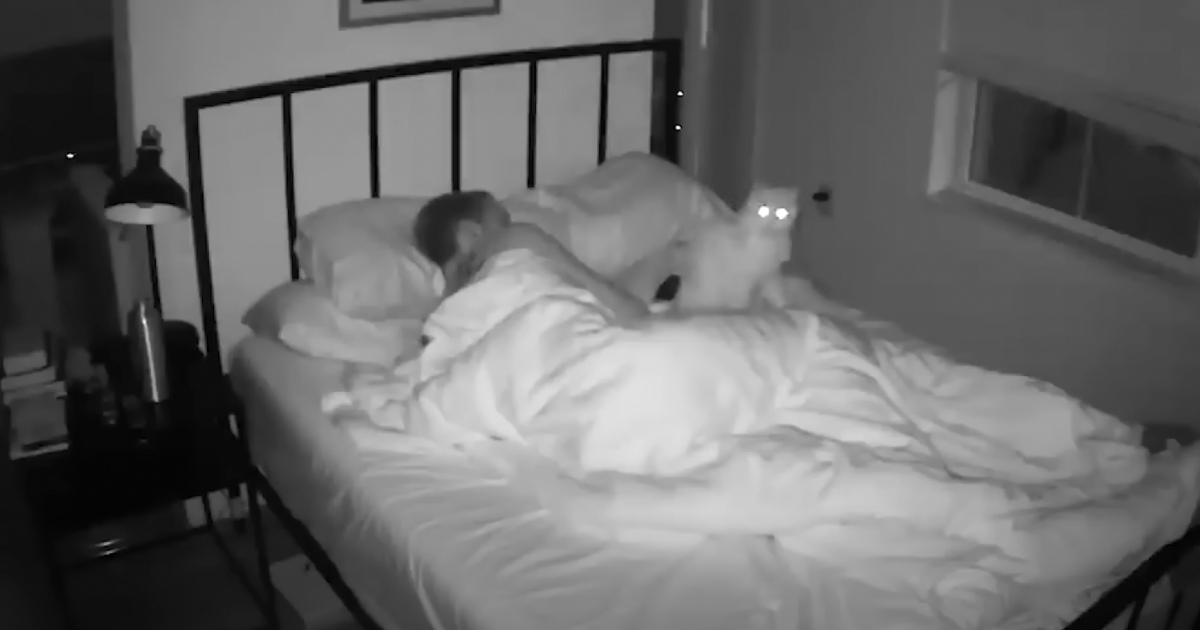 But what exactly do our pets do in the evening? Of course, we know about their zoomies in the middle of the night. We could only assume all the havoc they wreak when we wake up to it the next day.

This fur dad was thinking of the same thing. His concern was more specific; he often wondered how he kept missing his alarm and thought maybe his cat had something to do with it.

The cat he wanted

Aaron Brown always wanted to have a cat. Who wouldn’t, right? He was on the hunt for the right one. Finally, last February, he found Tormund.

Tormund was a shy cat at first. Like newly adopted pets, he was quiet and very behaved. He was probably just taking his time to get used to his new home. But a few months later, that all changed as Tormund slowly broke out of his shell.

Aaron soon found his beloved cat becoming more playful. Sometimes, he is even more playful than he would have wanted him to be. Not that he was complaining!

But sometimes, his cat’s antics could cause a bit of trouble. For one, Aaron suspected that Tormund snoozed his alarm more than a couple of times. He wasn’t sure about it yet, but he was about to find out.

Curious about what his cat does every night, Aaron set up a camera in his room to record whatever Tormund was doing while he was asleep. Lo and behold, he saw the crazy things his cat did!

He was playing around – jumping from table-to-bed-to-floor-to-bed. It was like an endless loop! He sometimes sat on Aaron’s chest and lay down beside his face. No wonder he woke up often with too much cat hair in his mouth!

But there was one discovery that made Aaron just laugh and shake his head in disbelief. He saw how Tormund would snooze his alarm!

As it turned out, when Aaron’s alarm went off, Tormund looked at his phone and tapped that huge snooze button flashing before his eyes. Of course, he wasn’t aware what the button was for, but he knew he could tap on it like crazy.

Aaron laughed at what his cat did because pressing that snooze button might get him in trouble for work if he did not arrive on time. Yikes!

A handful – but loved

Aaron recognized that Tormund could be a handful. He was only a few months old and still has that kitten energy. But even if he was such a naughty cat, he still loved him.

Despite all his nightly quirks and activities, Aaron adored his cat for being that smart and loving. He only hoped that all that energy would tone down once he grows older.

Jenn made the daring decision to ring in the new year by donning a glittering black bikini.
Jennifer Aniston’s gorgeous beach attire hasn’
0 154