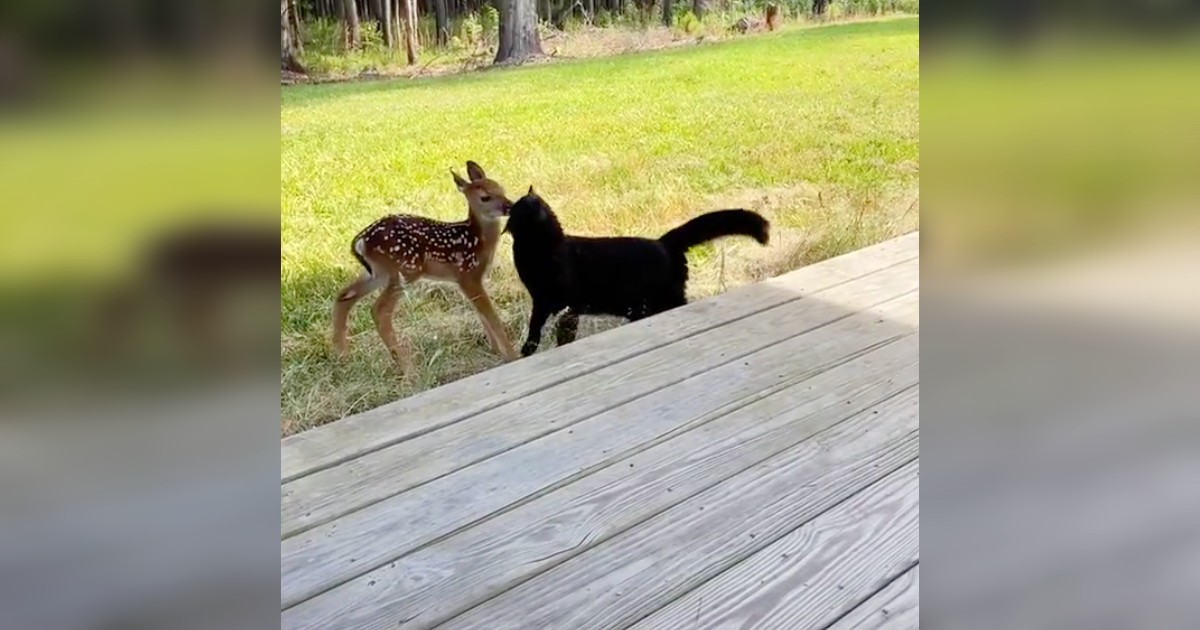 Baby deer, also called fawns, are known to be among the most adorable wild animals.

Think of Bambi, Rudolph the Red-Nosed Reindeer, and other charming depictions of fawns you’ve seen over the years.

Fawns are about six to eight pounds when they are born.

By their first winter, they can usually grow to as big as sixty to seventy pounds.

For cat lovers, nothing is cuter than a kitten playing with a ball of yarn or purring while curled up on a pillow.

While they are often thought to be solitary animals, they can be sociable in certain circumstances.

Put a cute cat and a wild baby deer together, and you have something worthy of a movie.

This TikTok video shows a cat and a fawn playing and snuggling up to each other.

The animals are in a wooded area near a wooden deck.

The cat curls her tail around the neck of the deer.

They separate for a while, and it looks like the black cat is about to leave the fawn alone.

However, the cat makes a u-turn and goes near the deer again.

The two animals put their noses together and spend a few moments like this, seemingly getting to know each other.

It’s evident in the video that the two unfamiliar animals are curious about each other.

Whichever it is, we are gifted with a video that shows these two animals adorably interacting with each other.

The entertaining interaction between the cat and the fawn was posted on TikTok by Taylor Hoff, also known as taylorhoff08 online.

Hoff is also the owner of Walter, the black cat featured in the video.

We’re not the only ones who watched this cute Tiktok video on repeat.

The video has been viewed over 1 million times and liked over 220,000 times.

There’s no lack of positive comments either. One user wrote, “This is all my eyes ever needed to be blessed with”.

Another user said, “This is the friendship we all needed to see today!”

Many comments wondered why the cat was so big and was almost the same size as the deer.

Hoff replied, “This deer is small. Walter is the normal size of a house cat.”

She further clarified that Walter weighs about six pounds.

Other commenters asked where the deer’s mom was and why the fawn was left alone. Hoff previously posted that she found the deer dehydrated, meaning the deer’s mom had abandoned the fawn.

While we can’t recommend bringing home wild animals, we commend Hoff for caring for Lewis!

We also love that this experience gave us the best opportunity to see a cat and deer interact with each other, which is not something you see every day.

To see the cutest interaction between cat and fawn, watch the video below!