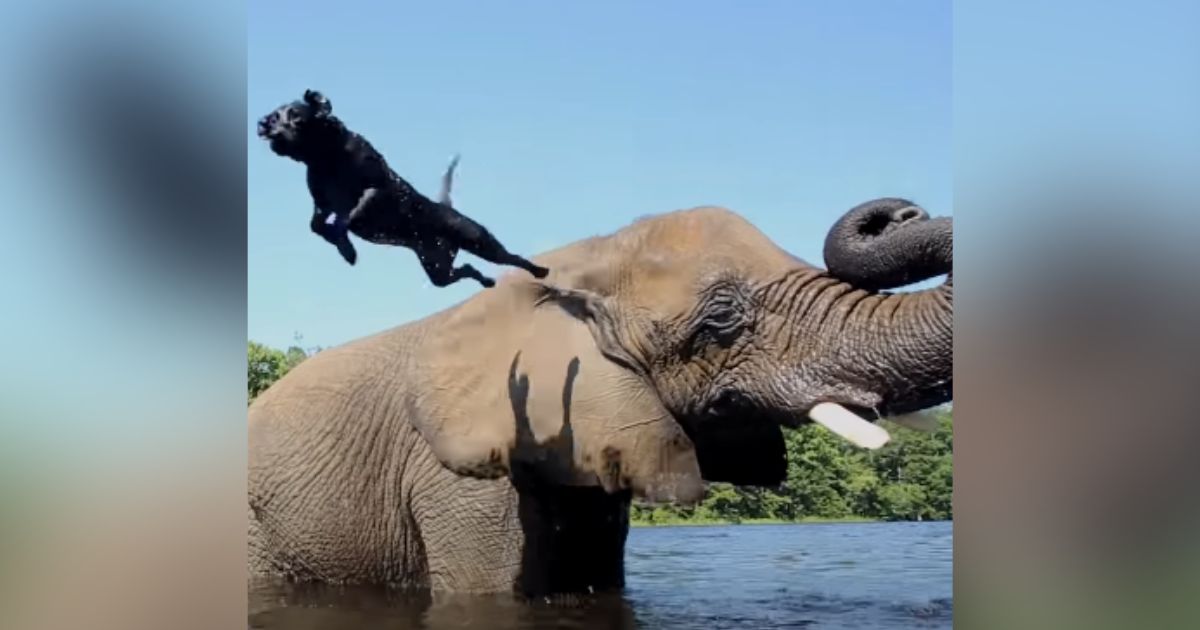 Nonetheless, these stories of interspecies friendships never fail to put a smile on our faces.

We’ve seen it all from cheetahs and puppies, and dogs and ostriches, the list just goes on and on.

A sanctuary in South Carolina also has its fair share of animal partnerships.

And even if one of them is a hundred times bigger than the other, it never stopped them from becoming close.

In the waters of Myrtle Beach Safari, a black Labrador jumps into the water.

It was just an ordinary day splashing for Bella.

But her jumping board is far from ordinary.

Not far from her is a 9-feet tall and 4-ton heavy elephant.

Bubbles, one of the sanctuary’s resident elephants, is Bella’s best friend.

And as her friend splashes and paddles nearby, she’s content just soaking.

Even as a dog and an elephant, these two have a lot of things in common.

One, they both love the water. The breed is well known for its affinity for beaches, lakes, rivers, or any body of water they can dive into.

Elephants love water too as it’s one of their ways of regulating their temperature.

They are one of the few animals that can actually take a bath themselves by sucking in water through their trunks and spraying the water all over their body.

Two, and more importantly, Bella and Bubbles are both orphans.

Thankfully, through the sanctuary, the kindred spirits found a home in each other.

Bubbles became an orphan at a very young age.

She wasn’t a stranger to cruelty as both her parents fell on the guns of poachers.

The 20-year slaughter of elephants made a significant impact on the local animal population and it was all because of ivory.

Thankfully, the then-young elephant made her way to the Myrtle Beach Safari where she was rehabilitated and nourished. It was there that she met Bella.

The two have been inseparable since.

The two enjoy long walks together.

Well, actually, Bubbles gets to do the walking but with her big strides, Bella had to run just to keep up.

But that’s totally fine for Bella.

Once they are in the water, she’ll treat her elephant friend like her own personal island.

She’d dive after the ball and climb on Bubbles’ back.

She’d stumble over sometimes and roll on the elephant’s trunk. Bubbles is Bella’s giant dog, and Bella is Bubbles’ strangely tiny elephant.

The Myrtle Beach Sanctuary is the base of TIGERS.

TIGERS, which stands for The Institute for Greatly Endangered and Rare Species, is founded by Mahamayavi Antle with the vision of protecting wildlife, especially endangered species.

Today, there are only over 400,000 elephants across Africa.

Even with the crackdown on poaching, the elephant population is still crawling dangerously close to alarming numbers.

Poaching is still a problem but other issues like urban encroachment are also pushing the elephants to extinction.

Currently, Botswana is still an elephant stronghold hosting 70% of the elephant population.