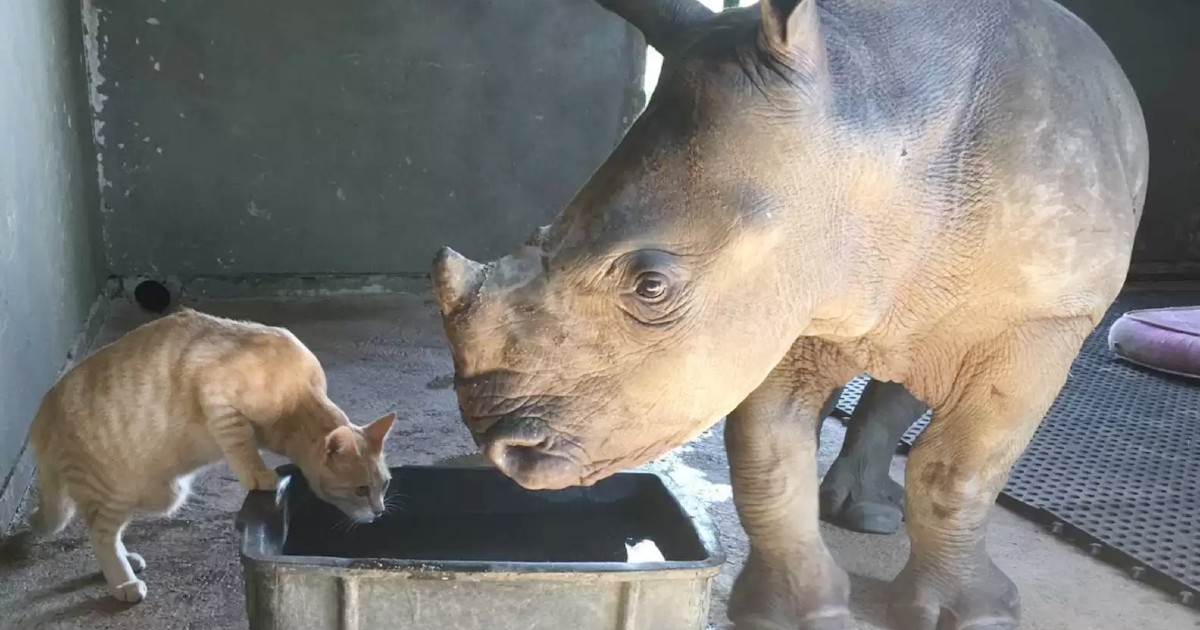 One day, The Rhino Orphanage heard about a two-month-old rhino who had lost her mom to poachers.

The poor little thing was all alone, and so the South Africa-based organization knew they needed to take her in and help nurse her back to health.

The baby somehow survived on her own for four days, but she was very weak when she got to the orphanage.

Her caretaker, Jamie Traynor, gave her milk, and she slowly started regaining her strength. They decided to name her Nandi.

“Her name is ‘Nandi’ which means love. She drank her milk straight away on Saturday night and is still drinking well and eating dry food. She’s a little rhino with a big attitude and has given Jamie many bruises already, but she’s slowly getting to know the caregivers,” Wild Heart Wildlife Foundation, which supports The Rhino Orphanage, wrote on Facebook.

The Rhino Orphanage had one resident who was a bit different than the others: an orange tabby cat named Mewie.

Traynor had found Mewie when he was just a few weeks old and rescued him. He mostly kept to himself at the orphanage. But when he saw Nandi, that all changed.

Mewie started hanging out with Nandi. The two took naps together and enjoyed meals together. They also went on long walks around the property.

“They get along pretty well because they both love to go for walks and then come back home and take a nap,” Traynor told The Dodo. “Mewie needs to be carried back from the walks because he gets too tired!”

Traynor shot a video of the two of them walking around. As they walked, Mewie constantly turned around to make sure Nandi was following. Mewie was very protective of his big friend!

Then, the orphanage made a very exciting announcement: Nandi had returned to the wild!

The orphanage wasn’t sure if she would ever be strong enough to go back to the wild, so this was a great day for everyone.

While it’s very exciting that Nandi is strong enough to go back to the wild, we’re sure Mewie will miss his big friend.

But luckily, there are many more baby rhinos in need for the loving cat to help. Mewie is going to do a great job looking after all the other little rhinos who come into his home!

During their two years together, Mewie and Nandi formed an amazing bond. We’re sure they’ll remember each other forever.