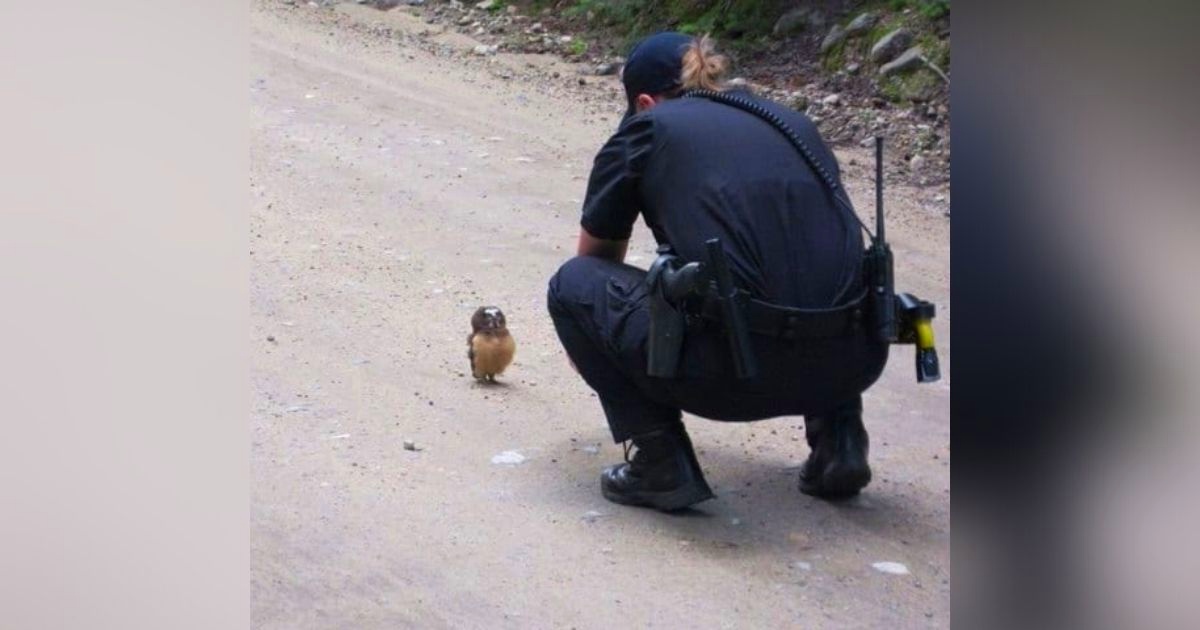 It was a sunny day and two officers from the Boulder county police department were driving down a dirt road when they came across an adorable sight.

Nothing was out of the norm until they saw the tiniest little animal plopped down right in the middle of the road.

At first, they couldn’t quite tell what they were looking at. Then they got a little closer.

To their surprise, it was the cutest, tiniest owl

To be more precise, it was a baby Northern Saw-Whet Owl.

Lost and a little confused

The owl was obviously a little lost.

The deputies wanted to make sure she safely got off the road and so one of the deputies approached owl.

As the deputy neared the tiny owl, she began speaking to it.

Nodding and moving its head

The little owl was surprised to hear a human talking to her, and she started twisting her head around in the cutest ways.

The deputy couldn’t help but laugh.

She said ‘hi’ again, and the owl’s eyes widened. She was clearly having a great time talking with the deputy.

The deputy stopped filming after this, and she and her partner convinced the owl to get out of the road. The owl flew away to safety.

The police department provided a bit of background information about the owl in their video description.

“A tiny owl with a catlike face, oversized head, and bright yellow eyes, the Northern Saw-whet Owl is practically bursting with attitude. It has a very sophisticated hearing due to vertically asymmetrical ears and different shape of ear openings,” they wrote.

“These Owls hunt mainly at dusk and dawn and most often use the “sit and wait” tactic to drop down onto prey on the ground from low hunting perches. Maybe this little guy is trying to set a trap.”

The images and footage are too cute

After the owl was safely out of the road, the Boulder Police Department posted photos on Facebook.

“Our deputies were driving when they were stopped in their tracks by this young Northern Saw-Whet Owl. After some curious head twisting (on both sides) it flew safely away,” the Boulder Police Department wrote on Facebook.

The owl doesn’t even look real

The post quickly viral, receiving more than 10,000 shares. The video of the deputy also went viral, and it has now been viewed more than seven million times.

Apparently, everyone thought this was a hoot.

On Facebook, many people imagined what the owl was saying to the deputy. They came up with some hilarious ideas.

The comments are hilarious

From praise and wonder to jokes and quotes, this little fella sure did get the internet’s attention.

Everything about the video is great, from how seriously the deputy takes the conversation to the owl’s human-like expressions.

Need a laugh? This is it.

Man interrupts dog adoption photoshoot yelling”Those are my dogs!”
There are some moments in our lives when the unexpected
0 396