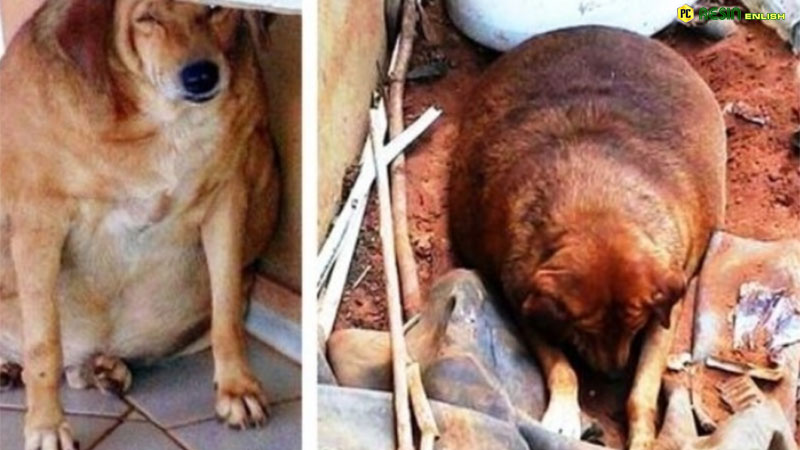 The workers at a remote gas station in rural Brazil were shocked to find a sweet puppy mercilessly abandoned by a passerby. Slowly, the pup adjusted to life as a homeless dog. The workers named him Bolinha and fed him leftover scraps from a nearby restaurant, writes ilovemydogsomuch The unhealthy eating took a toll on the 9-year-old dog and he gradually became obese. Over time, his weight increased to such dangerous levels that he became morbidly obese, weighing in at over 80 lbs. At this point, many locals came in to watch the “fat dog”, but no one cared to get him help. For the locals, Bolinha was nothing more than an “amusement” to gawk at and to photograph. He was treated like a “local attraction”, but the poor boy badly craved for love. One day, the heartbroken dog crawled up to a junkyard and stopped moving altogether. That’s when some animal activists from a nearby town got word of him and decided to intervene.

The activists found Bolinha breathing heavily in a ballooned-up state amidst a pile of debris. They took him to the Animal Protection Organization and cleaned him up. The shelter’s vet and many volunteers got together to chalk out a plan for Bolinha’s weight loss. Thankfully, Bolinha’s obesity was solely due to overeating. The volunteers began an exercise regime for the dog and put him on a strict diet. Bolinha was also instructed on a water treadmill to ease the pain in his joints.

After months of effort, Bolinha has lost a whopping 30 pounds. He still needs to shed some more weight, but he is now a happy, cuddly dog who smiles all the time. He will be adopted by one of the activists who rescued him. Bolinha’s weight loss battle and stunning transformation is inspiring people around the world. We hope he spends his twilight years in comfort. We are so proud of you!