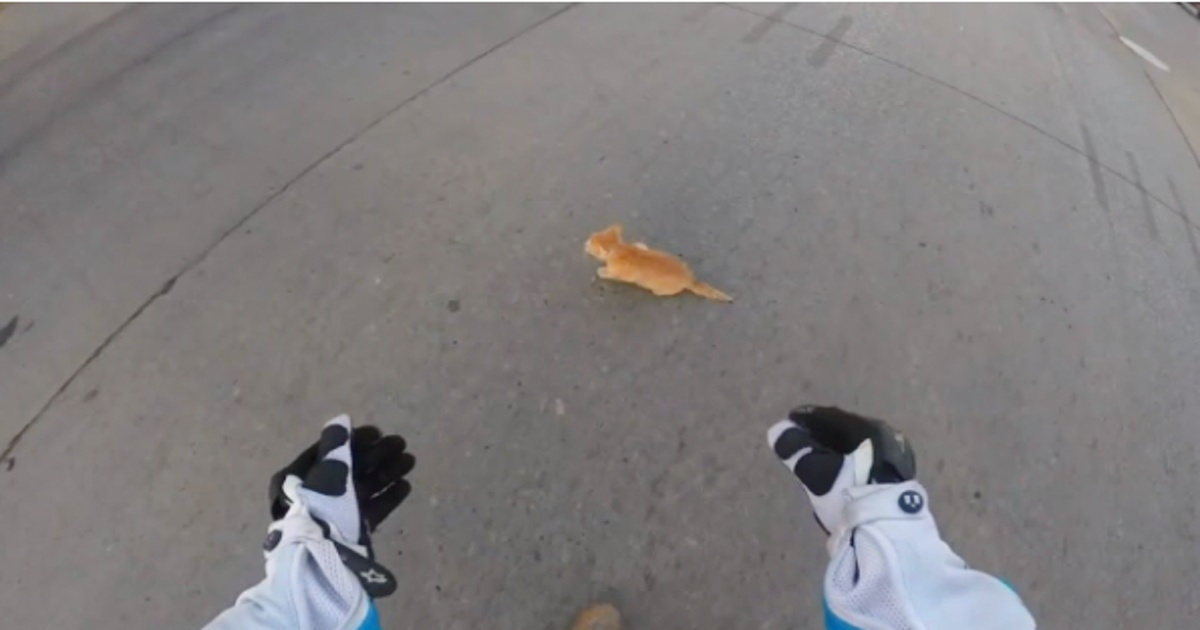 Laney used her motorcycle to work every day, and she made sure to have her GoPro attached to her helmet and recording, just in case some accident happened.

This is actually a brilliant idea, and something very useful to have on hand if one gets involved in an accident.

But, as she admitted, she’d never recorded anything cool with her camera, until a few years ago.

A few years back, as the woman was riding her motorcycle to work, and she was stuck in traffic, she noticed something that looked like a leaf lying on the road.

She couldn’t tell what it was exactly until a truck drove right past it and it moved!

That’s when Laney realized that it was actually a tiny kitten.

She just couldn’t wait there until someone hit it. She knew she had to do something to help the poor soul.

So, initially, she tried to make the other drivers stop by using her hands. And, eventually, she left her motorcycle in the middle of the intersection, jumped off, and ran to catch the little guy.

The kitten was obviously terrified, but she managed to grab it and move it to the side of the road, where a woman was.

Laney placed the kitten in the woman’s hands and she rushed back to her vehicle, which she had to move away from the intersection.

The woman turned around and got to the spot where the woman and the kitten were. She knew the feline would be safe and comfortable if she placed it inside her helmet, so she did.

She would have to take it to the vet to check if it had been harmed in any way, and she sure hoped that she would be able to keep it.

Laney had no idea where the kitten had come from. It seemed that it just fell from a passing vehicle.

“He fell out from underneath a car,” she told Inside Edition. “Maybe he went up there for warmth.”

Laney guessed that it was probably a stray. Still, she would be able to find out soon, because it seemed that he fell off a car that fell bore the logo of a local business.

This way, she could track down the person driving the vehicle and find out more details about the kitten’s background story- if there even was one.

The woman just hoped that she would be able to adopt the kitten that she went above and beyond to save.

“I’m hoping we can keep him,” she said at the time. ‘We were thinking about getting another kitten, so this worked out well.”

The people who watched the video have only words of praise for this woman who selflessly put her own life at risk to save an animal in need.

“[S]he’s such a hero and thank goodness the kitten is okay,” someone wrote.

Indeed, not all heroes wear capes.

Watch the rescue in the video below.