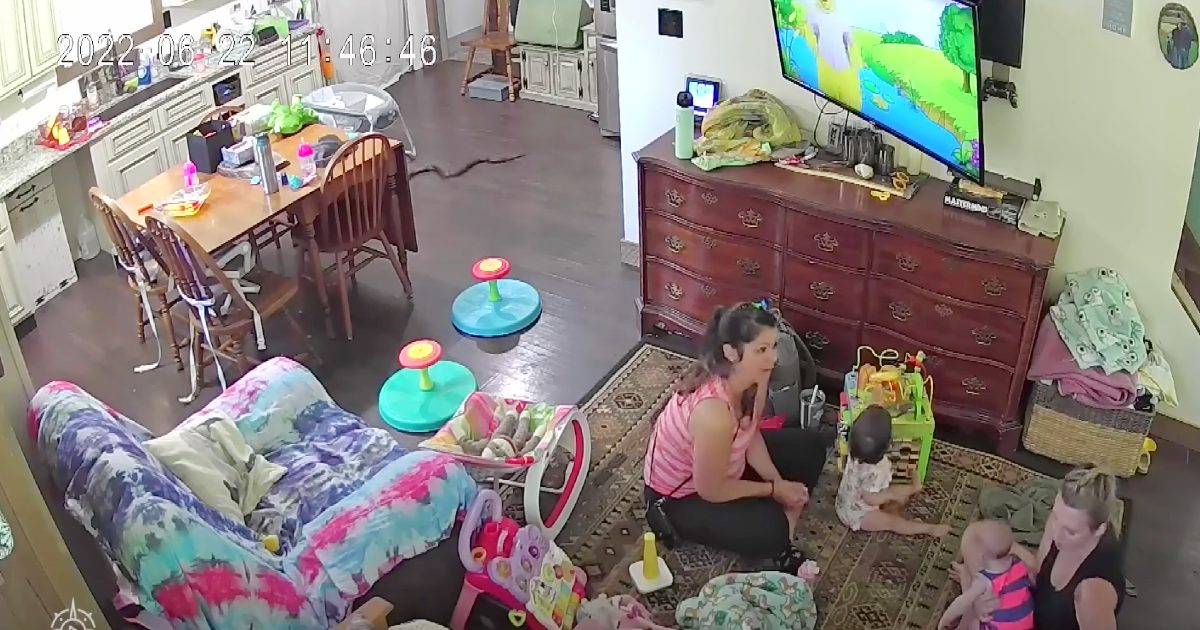 When you have a toddler, you have probably gotten used to endless chitchats.

As these little kids open their eyes in the morning, they would start talking non-stop.

It’s not that we don’t appreciate their wild imagination and curiosity, but parents have gotten used to replying, “Yeah”, “Oh! Great honey,” and so much more.

With all the things that we are doing, we don’t have time to listen to them, especially when Mr. Fluffy Bear needs to attend magic school.

Though, this short video would make us parents think otherwise.

It was June 22, 2022, just around lunchtime, when Rachel Lorenz and her friend, Dana Dadig, had a playdate.

The two mothers were busy tending to the kids. There were two babies and one toddler.

So, you can imagine how hectic their schedules were.

There were toys scattered, nursery rhymes on the television, and kids playing. The two mothers were also talking when Rachel’s toddler suddenly pointed out something in the kitchen.

“There’s a snake in the house!” said the little girl. Her tone was a bit amused by the rare visitor.

Rachel, who seemed to know what to say to her daughter, replied, “The snake is outside. He is not in the house.”

She stood up, carrying her baby, and her toddler pointed again. That’s when Rachel saw the slithering visitor.

“Oh! God! There’s a snake in the house!” yelled Rachel as she went inside another room.

Following her was Dana, with her baby.

We can then hear Rachel screaming her husband’s name. Being in this situation, you would really feel terrified.

Good thing Adam, Rachel’s alert husband, was nearby. He saved the day, and no one got hurt, including the snake.

Rachel’s daughter also helped save the day. If she didn’t notice the snake, can you imagine what could have happened?

“It was just making its way to my house and we had no idea it was her,” said Rachel in her interview with Inside Edition.

“No snakes were harmed, but he was relocated far enough away that he hopefully decides to not come back inside,” Rachel stated in her Facebook caption.

The video received so many comments. Some told Rachel to listen to her daughter, while some said that the entire ordeal was scary, but quite funny too.

Inside Edition got to talk to Ron Magill, the communications director of Miami Zoo, who identified the snake as an Eastern Rat Snake.

According to him, snakes are frightened of humans, and this type of snake is not poisonous. That’s good to know, right?

We get it, but when you’re in the same situation, fear would get the best of you.

Even though they’re not poisonous, the Eastern Rat Snakes are excellent swimmers. They use their skills to catch their prey.

They are also constrictor snakes, which means they will use their body and suffocate their target.

Good thing they were able to see the snake before it went close to them.

Watch the full news feature below and don’t forget to share!