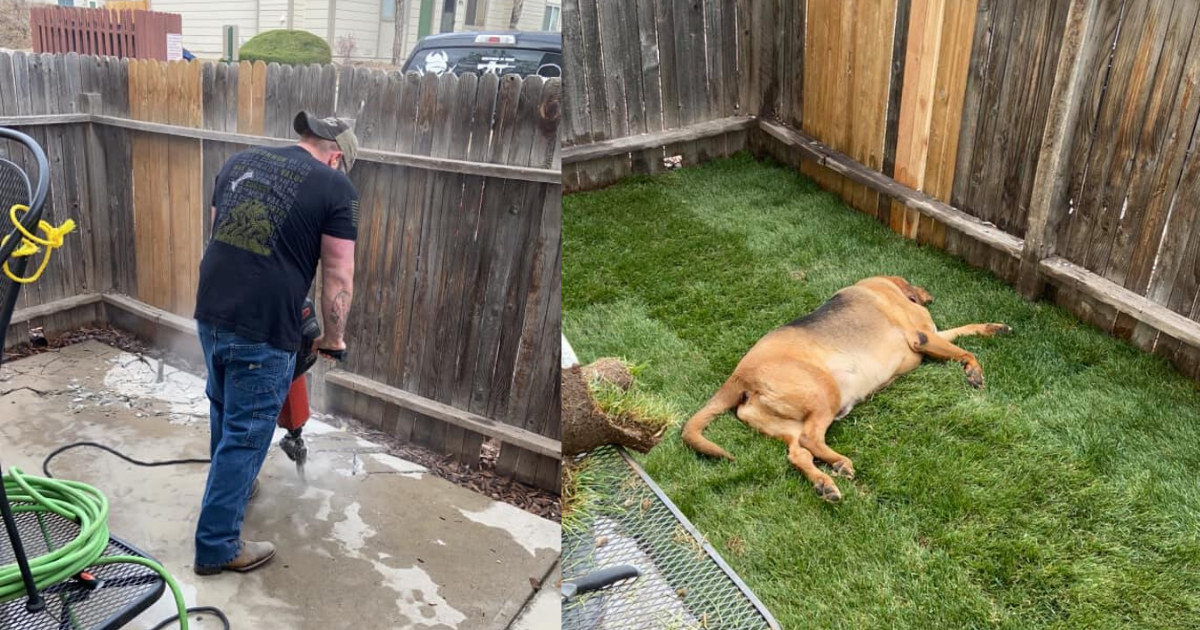 When choosing a pet to rescue, some of us would avoid those with behavioral issues. Maybe we have children that we want to make sure will be safe around the animal, or maybe we just don’t fancy the idea of all of the stress and extra training that comes with an animal of this nature.

But one selfless woman from Colorado was up for the challenge, and she adopted a ‘destructive, aggressive, and untrusting’ pooch in the hopes that with some patience and love, this difficult boy would be able to change his ways.

She introduced her pooch to her boyfriend, who claimed to not be too fond of the dog, but then he carried out an act of kindness hat truly proves that actions speak louder than words.

Bentley the Bloodhound wasn’t what you’d call the easiest of dogs to care for. He had lots of behavioral issues, no doubt coming from a difficult past, and KaTarra was still in the process of training him, calming his anxiety, and breaking his aggression. She knew that having a grassy area for Bentley to play in would really help.

The backyard began as a simple slab of concrete, but KaTarra’s selfless boyfriend stepped in and did something special for her beloved pooch.

Although he wasn’t too fond of the rescue pooch, KaTarra’s boyfriend took it upon himself to set to work giving the backyard a bit of a makeover. He worked tirelessly to replace the concrete slabs with dog-friendly grass, and KaTarra gratefully shared the whole process on the Facebook group Dogspotting Society. She said:

‘I took him in at 4. I was his 5th home and everyone had given up on him. He was destructive, aggressive, and untrusting. I was in a 1 bedroom apartment but I couldn’t let him go back to the rescue again after not doing well at my parents home. I worked tirelessly to leash train him, treat his anxiety, diagnose and treat his severe allergies, and break his aggression.’

‘I had to move and couldn’t find a single rental in the stupid city that would take my 120lb bloodhound … so I bought a townhouse. The whole time he’s been with me he’s never had his own yard… just the park and the grass on our walks…

For the dog he hates… We’re so lucky.’

KaTarra then shared the pictures of her boyfriend working hard to remodel the yard for Bentley. First off he pulls up all of the tiles, then he lays down the grass so that the pooch has a cozy spot to lay in. The last picture shows Bentley laying out in his new yard, and it’s clear to see that he’s a big fan of it.

Jenn made the daring decision to ring in the new year by donning a glittering black bikini.
Jennifer Aniston’s gorgeous beach attire hasn’
0 166