Skegness Nature Reserve staff found themselves in a difficult situation when they got a distress call. The caller was Ian Ellis, writes ilovemydogsomuch. It turned out that Ian was birdwatching at Frampton Marshes RSPB when he saw something unusual through a telescope. 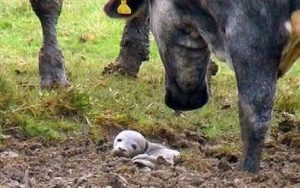 Ian found a large herd of over 30 cows trapped by an unconscious puppy. The poor animal lay buried in the marshy ground, and the cows looked on in alarm, wondering how to help the struggling child. Given the tight schedule and precarious situation, reserve staff gave Jan basic instructions on how to surround the herd and get the calf out. When he took a closer look, he was shocked to find that it was not a puppy, but a seal! The next hour was stressful, but the 67-year-old animal lover carefully followed the staff’s advice and managed to get the traumatised pup to safety! 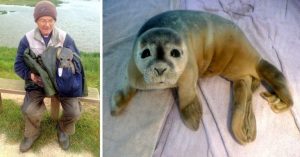 The seal cub, later named Celebration, was brought to the reserve hospital in a state of dehydration and lethargy. He was only five days old and believed to have been orphaned. The veterinarian assumed that Celebration had got into the bog after being swept away by the flood. Over the next few days, the seal was hydrated until his condition stabilised. 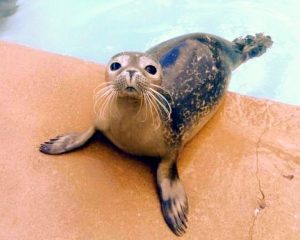 Celebration is still too young to forage for food in the water on her own, so she should not be released yet. Another urgent problem is her breathing, for which she is taking antibiotics. Celebration is now getting on well with the other puppies at the shelter. It is only a matter of time before she makes a full recovery!

The video below shows how the cows discovered the dying seal pup and came to his rescue.