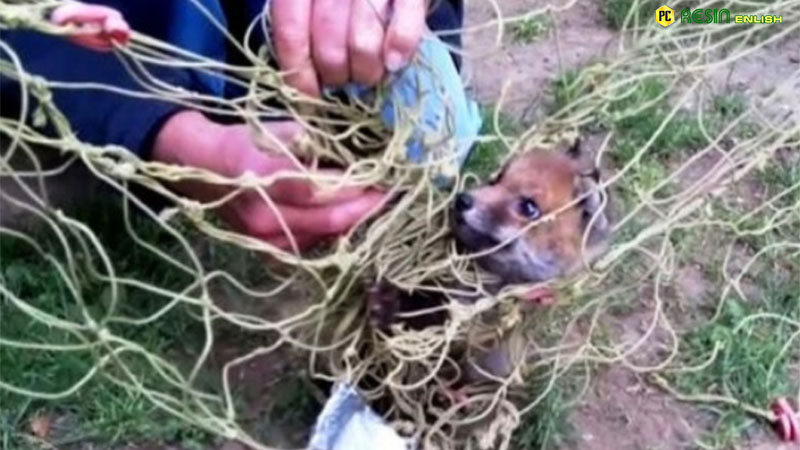 A man was passing by a field when he noticed some dramatic movement in the dangling soccer net,

He soon realized that a creature was badly entangled in the net from all sides and was unable to escape. At first he thought it was a dog, but as he inched closer to check, he discovered that the distressed creature was actually a wee baby fox!

Seeing the fragile state of the fox cub, the man gave a rescue call to the expert workers at Wildlife Aid Foundation, a charitable rehabilitation sanctuary. By the time the rescuers arrived, the cub was barely breathing from getting strangled by the sharp threads intertwined around his neck. The poor thing was running out of time. The rescuers maintained their calm as they grabbed the baby fox and began cutting off the multiple knots one by one. Initially, the baby was apprehensive of humans handling him. But soon, he sensed their good intentions and loosened up his body. Finally, the rescuers were able to safely free the sweet creature from his miserable predicament! While the rescue was successful, the fox cub had lost too much of his energy during the ordeal. He remained motionless on the grass for several minutes, while the rescuers massaged his limbs to realign his compromised circulation. Eventually, the baby fox’s troubles were over and he happily bolted off to find his family. The sanctuary explained that this problem could have easily been avoided by rolling up and putting the soccer net away after use.