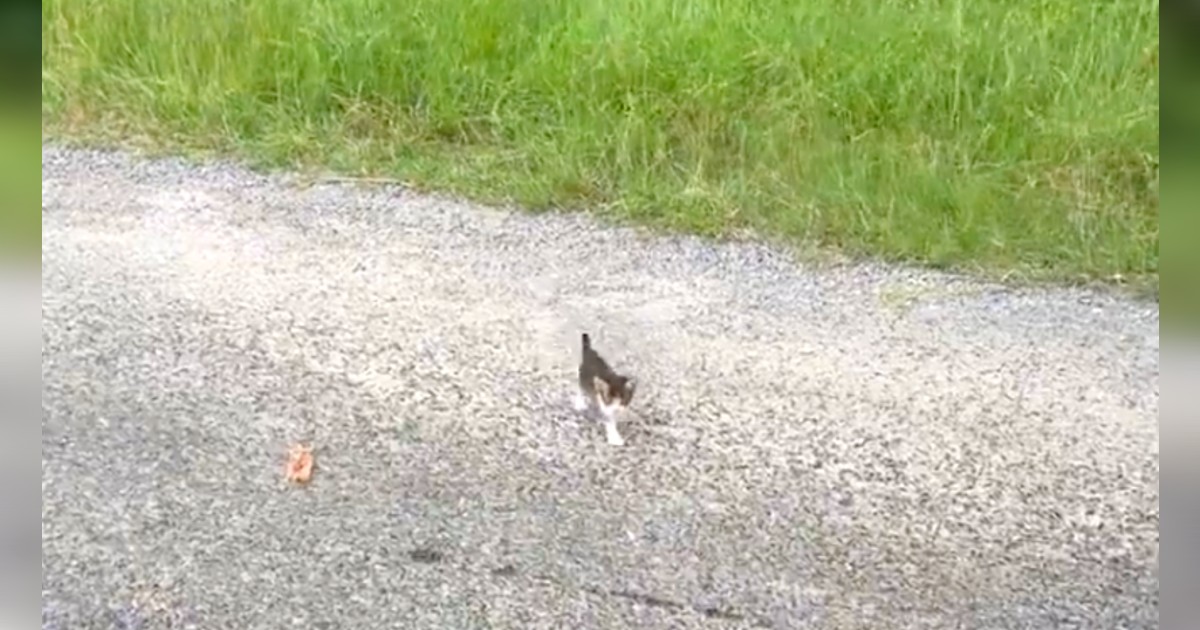 Why did the cute little kitten try to cross the road? To deceive the poor human derp who got in its line of sight, of course!

Robert Brantley was just minding his own business, driving along the country backroads of Louisiana, when he spotted what looked like a tiny grey kitten flop around in the grass.

Since he was jamming along at 40 miles an hour, he wasn’t entirely too sure what it was. So he flipped a u-turn and headed back to the spot where he thought he I-spied the critter.

And as soon as he stepped out of the car, a white and grey tabby darted toward him, confirming that he was right.

But just when he thought it was safe to scoop up the bewitching little guy, that’s when a mob of fluffy smittens descended upon his position and taught him a hard lesson about life.

Sometimes you get more than you bargained for!

In this case, the unexpected bargain was a free-for-all baker’s dozen of adorable strays who just wouldn’t leave him alone!

In the video he filmed to prove he was still alive when he first encountered the horde, one kitty after another can be seen popping out of the grass and converging en masse around his legs.

Even though they were barely a few weeks old, they instinctively knew the tall stumps would serve their needs as a solid, American-made scratching post.

But he did take them all because that’s what good hoomans do.

To his credit, Robert didn’t let a single swear word slip out of his mouth the entire time he was filming the hostile takeover. And that’s exactly the kind of compliance that cat overlords look for in their ideal playmate.

Robert was actually pretty upset that someone would purposely abandon such beautiful babies out in the wilderness. They may be animals, but they’re not “wild animals” like their bigger cousins in Africa.

Domesticated cats actually require things like cardboard boxes and a variety of breakable items in order to live a rich and fulfilling life.

To deny them access to these resources is just plain cruel.

When Robert was finally able to extricate his legs and the rest of his person from the volatile situation, that’s when the true horror was revealed.

It soon became clear that there were SO MANY of them!

Wrangling 13 squiggly little beasts into the back of his Honda hatchback wasn’t an easy task.

“When I opened the door and started putting ’em in, they were jumping out. If I’d throw one in, three would run out,” he told NPR.

“But they would stay around my ankles on the ground. So I finally rolled down the windows, shut a door, and started putting them inside where they couldn’t get out.”

In case you’re wondering, all of the kittens have found their perfect hooman companion to forever toy with.

But you can still watch the video below to see how this cuddle puddle of kitties gets rescued!

In a rare public appearance with his girlfriend Alexandra Grant, Keanu Reeves appears positively radiant.
Actor Keanu Reeves has long been considered to be a
0 95