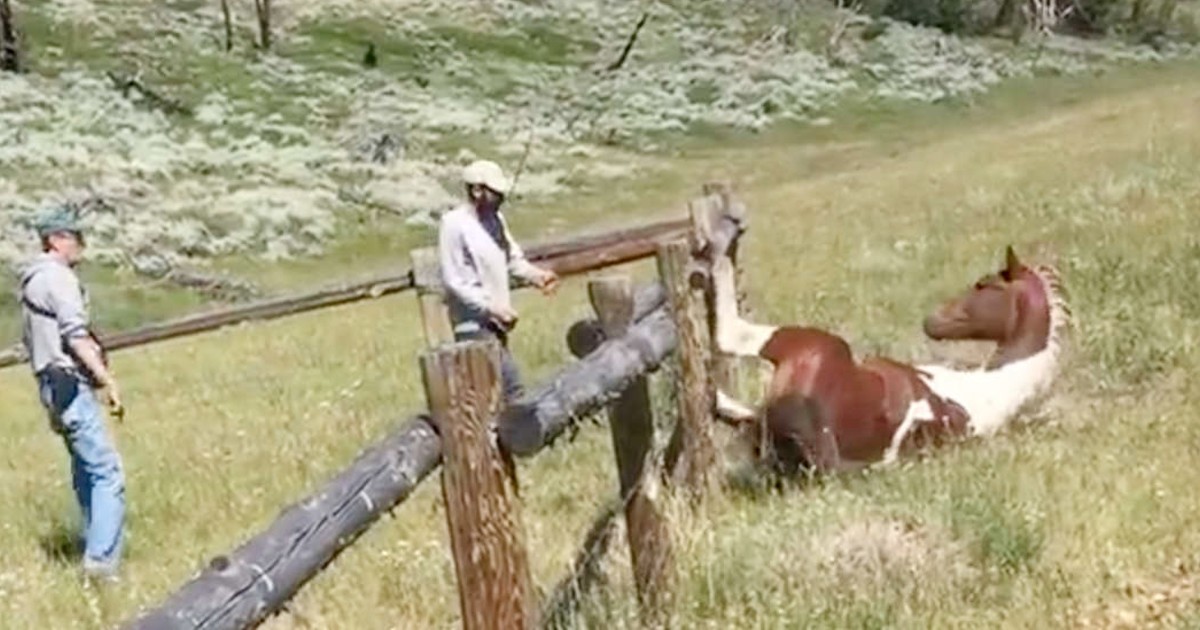 In some parts of the U.S., you’ll still find wild horses roaming the countryside. This includes Arizona, California, Idaho, Colorado, and a few other states.

According to the American Wild Horse Campaign, there are six states that have lost their wild horse populations.

But that’s not the case in Green Mountain, Wyoming where Melisa Tysver’s family helped save a wild horse tangled in a fence.

That rescue was captured on video and ended up going viral. What’s so amazing about the rescue was how gentle the family was with the horse.

The video shows the poor horse with its back on the floor and one leg in the air and tangled in the fence. You could tell she’s in distress and is squirming around and even kicking a bit.

The man in the video, whose name is Tony, comes to observe how she’s tangled.

One wrong move from Tony, and he could have ended up getting kicked by the horse’s strong legs and seriously injured.

Instead, Tony calmly moves along and slides between the fence to reach the horse on the other side.

“I’d cut the rest of those wires Tony,” says mom’s voice off camera.

Despite all the chatter, Tony quickly gets to work and snips the wires so that the horse can be free of them.

The family surmised that the horse was a bit still and that it probably had been lying there for a little while.

Amazingly, the horse just calmly laid there while Tony cut her free.

As soon as the horse sensed that the wires had been cut away she immediately tried to get up and run away, but she just fell right down.

“Is it still tangled up?” someone asked.

But Tony didn’t think so. He checked her legs to see if they were OK. They seemed to be fine, however, she was fighting to try and get it out for who knows how long. The horse was frightened so Tony just gently stroked her so that she knew that she was safe.

The poor horse was stuck for so long that she lost strength in her leg. The family just tried to make her feel comfortable until she was strong enough.

They came beside her and kept petting her as well as pouring some water over her mouth from a water bottle.

The family knew they had to do something to get this horse on her way so they came up with a plan. They would use a strap and try to get her to roll over and onto her feet so that she could stand.

“Even if she knows she can get up on three [legs], she’ll be fine,” said Tony.

The horse was a little hesitant when Tony started touching her back legs and putting them in the strap, but she was calmed by the young woman stroking her head.

The family was able to roll the horse over with some team effort and get her on her feet. She tried to quickly run off again like she did the first time but stumbled.

And the horse did. She slowed her pace and started walking softly while avoiding putting too much pressure on her weak leg. Eventually, the horse safely trotted off. The horse was spotted healthy the very next day with her baby.

“On July 2, 2017 on Green Mountain in Wyoming we were blessed with the opportunity to save a wild horse. We were able to find the same herd on July 3, 2017 and determined she was fine and leading the pack,” Tysver wrote in the caption of her video.

Check out her family’s compassionate horse rescue in the video below.