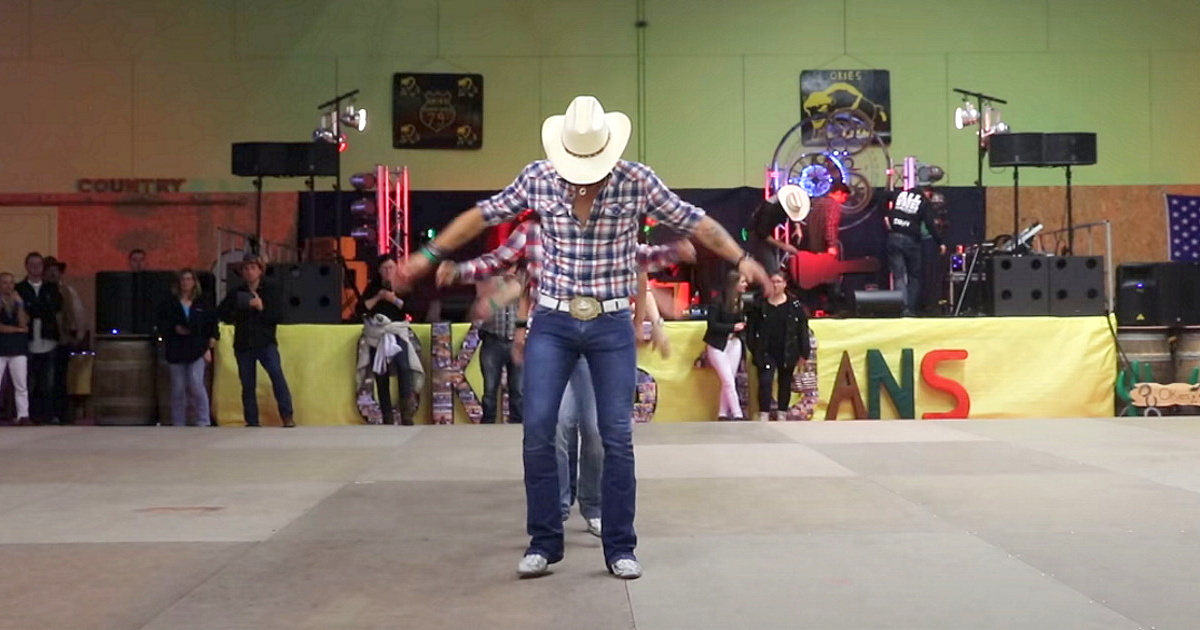 David Villellas is a line dancing choreographer who loves dancing with groups in different competitions.

When you hear “line dancing”, it’s only right that you think of country music and outfits but this video may surprise you since its held in France.

This group has quite the leader!

And if you’ve never tried to line dance in your life, this video of David and his friends may be your sign to finally sign up.

It’s really easy and even beginners won’t have a hard time following.

Country line dancing is really fun since you can learn to do it with family and friends.

They are choreographed routines that group people in line to a repeated sequence of steps in unison.

These dances can be done with or without a partner.

And while they are popular in the US, you’ll find that it’s become a thing in other countries!

Check out David Villellas at the OKIES 10 years Festival in Sauzé-Vaussais, France.

It’s him, another guy, and four other women dressed to look the part as they strut around with that familiar pattern to “A country girl”.

David and his buddies step from left to right and back, alternating patterns and spinning on their heels to the rhythm and the beat, keeping the energy up for their audience.

He’s not so bad to the eyes of his female fans either.

And those ladies in tight jeans have the men on attention.

These country guys and girls slid and shuffled their feet back and forth, getting everyone into it with a dance anybody could do.

And that’s actually true. You could be at a festival or a bar and be pulled by a random stranger on the dance floor.

All you have to do is to follow the basic steps and you’re good to go!

Granted, David does include a bit more fancy footwork but you really wouldn’t find those steps if you were asked to join a group.

You can improvise too, so long as it’s got that country feel to it.

According to Bella Ballroom, line dancing is believed to have existed in many different forms for thousands of years, and in different parts of the world too.

“The first known line dance instructions were written in a book of dance sheets in 1650 for English Country Dancing. Country line dancing appears to have originated in Europe and arrived to the United States with the settlers who immigrated to America,” their website says.

By the looks of it, line dancing isn’t going away anytime soon, thanks to the likes of David and his friends here.

This just looks like so much fun with the way they stomp on their heels, shift to their toes, then spin around, only to repeat the same sequence again.

And those are really nice shirts and hats too!