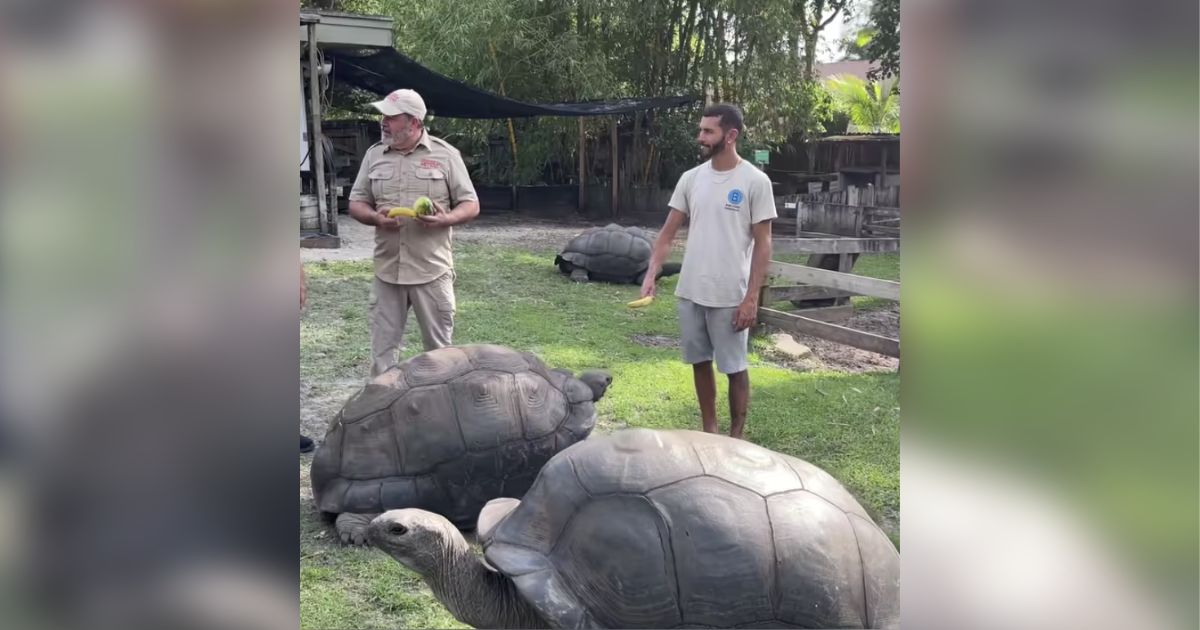 Jay Brewer loves reptiles. So much so that you’ll often find him using reptiles as props in his “extreme challenges and adventures.”

“Staffed by reptile enthusiasts, where you’ll find everything you need for your reptile or amphibian. We’d love for you to visit us at The Reptile Zoo to see these amazing creatures in person!” Brewer explains on his YouTube page JayPreHistoricPets.

Prehistoric Pets will also bring the exotic animals to you with their Jurassic Parties van that brings their reptiles to your parties for petting and photo ops.

To say he had a good time would be an understatement.

“This is crazy!” Brewer said after feeding two massive-sized tortoises.

“This is living the life right here,” the employee at Blakes Exotic Animal Ranch said.

Brewer was marveling over the 104-year-old tortoise.

He even got a high five from him.

Tortoises, also known as testudinids, have elephantine cylindrical hind limbs and feet and high domed shells, according to Britannica.

They are terrestrial creatures except for some living in Australia and Antarctica.

This vulnerable species hail from places like the Galapagos Islands and the western Indian Ocean. They can weigh up to 700 pounds and measure up to 4 feet long.

They are among the longest-living animals on earth. They have an average lifespan of up to 100 years or more.

So, it’s easy to understand why Brewer was so impressed by these big turtles.

He was especially excited about a 585 lb. tortoise named Tank.

He even got to hand feed them bananas which they ate peel and all.

“Is this amazing or what?” Brewer asked.

The video of his trip to the different zoos was posted on his YouTube page where it was viewed more than 29 million times.