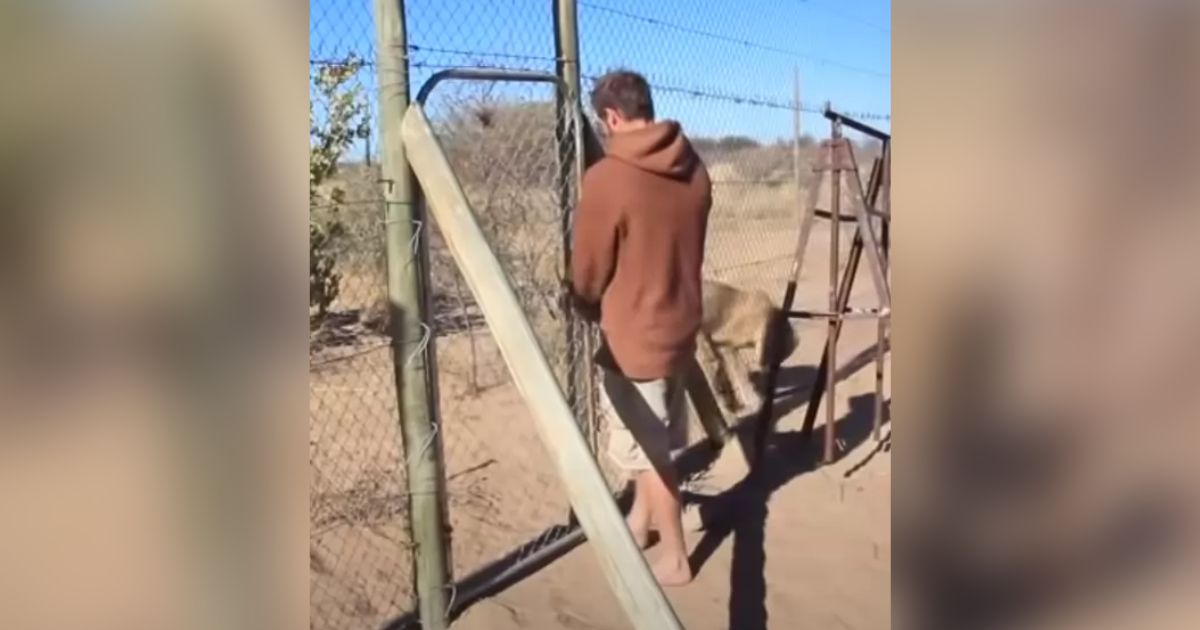 The internet is ripe full of dog and cat rescue stories. Rescuing an animal can be a really fulfilling experience for a lot of people. With the sheer number of stray cats and dogs roaming every country, it only makes sense for animal rescue to rise to the task.

This man rescued a much, much bigger cat than what we’re used to.

His name is Valentin Gruener, and his newsworthy venture involves a certain cat he rescued. Even though some cats are bigger than others, that doesn’t mean they’re invincible.

Val rescued Sirga the lioness when she was just a cub.

As adults, an African lion can weigh up to 400 pounds. They are the top predators there, and few other animals come to mind first when you hear the word “Predator”. African lions are the face of big predators to the rest of the world.

But as large and powerful as they are, their lives have been threatened by – surprise – habitat loss and poaching.

If they’re vulnerable as adults, then they’re even more vulnerable as cubs. The lioness’ name is Sirga, and she might’ve never seen her adult years if it weren’t for Gruener.

The story of how Sirga came to meet Val is an eye-opening one.

Sirga’s parents were captured for feeding on livestock, and she was born in a camp while her parents were being held there.

There is pretty much no such thing as an “only child” when it comes to lion cubs. Litters always have at least 2, and Sirga did indeed have siblings. Not anymore though, as her siblings seem to have been killed by other lions in that camp.

Sirga was the lone surviving cub, and her mother refused to feed her too.

That’s when Gruener ended up rescuing her, something she’s grateful for to this day.

It’s generally a bad idea to get up close and touchy with a big carnivore, but Sirga is an exceptional case due to the impact Gruener had on her.

In a video showing Sirga and Gruener, Sirga can be seen waiting for him behind a steel fence.

Gruener approaches the enclosure as calmly as a dog owner opens the front door.

He’s wearing nothing but shorts and a casual hoodie too. This is what it looks like when you truly trust a lion.

Gruener opens the gate, and Sirga comes out to greet him with the biggest embrace.

She’s all over him like a pet who’s been home alone the whole day.

That’s not all. Sirga is even making affectionate groans, almost like a whimper or a purr. You’ve got to admit, seeing a lion making that noise isn’t something you ever expected. I mean, who would expect that?

In another video uploaded to TikTok, Sirga even brings Gruener to the ground with her.

Not to hurt him, but to keep the snuggling going. Gruener is probably the only person on the planet she does this with.

Not everyone can rescue a lion as a cub and have them be this friendly.

Lions are wild predators through and through, and Sirga is just a special case of a particularly affectionate lion. So don’t go ahead and try what Gruener is doing here.

Just enjoy watching the scene from the safety of the internet.

Click the video below to see Sirga’s heartwarming ‘thank you!’