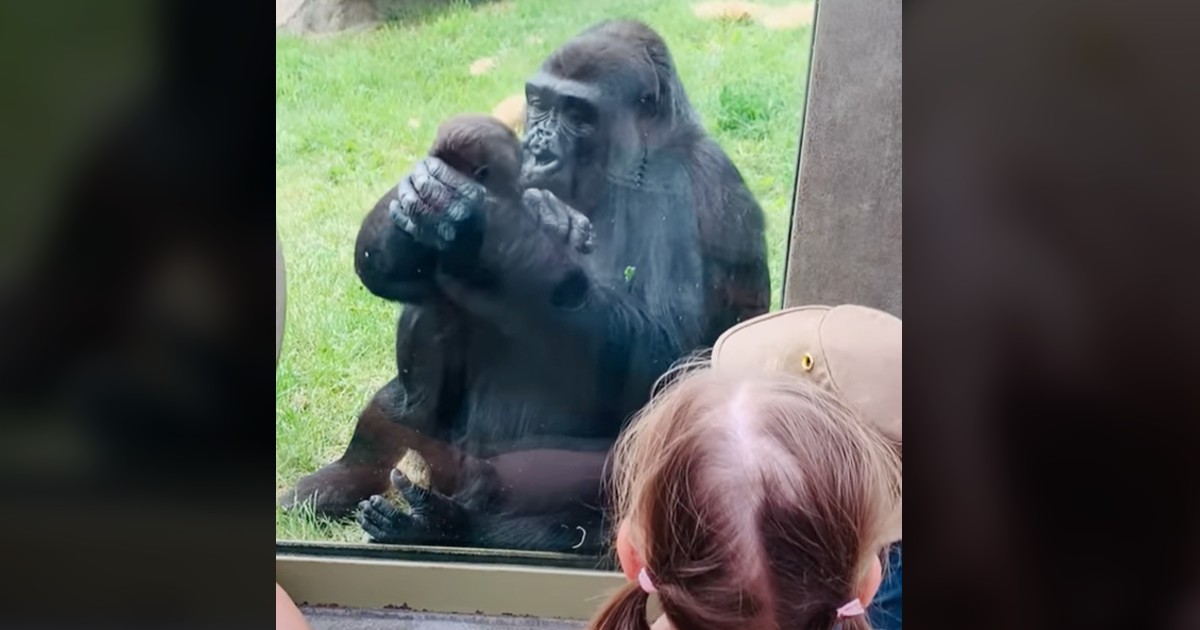 An incredible scene occurred at the Calgary Zoo when a mother gorilla presented her small youngster to the crowd, and some visitors were lucky enough to witness the glorious moment.

In the video below, you can see the gorilla holding her young one close and kissing its forehead before scooping it up and lifting it into the air.

It was a true Simba moment.

The footage shows someone saying, “Oh my goodness! Did she just give it a kiss?” Another woman acknowledges the gorilla’s kind and amusing gesture and said, “Thank you for showing us!”

The guests were truly surprised yet mesmerized by the love and adoration the mama gorilla has for her beautiful baby.

The birth of a Western Lowland Gorilla is depicted in this video, which is a very joyous occasion for the entire world. The birth of the gorilla is particularly significant because it is a severely endangered species.

This is an important birth success.

Six adult Western Lowland Gorillas reside at the Calgary Zoo, and with the birth of this infant, we are one step closer to saving the gorillas.

The natural gorilla population has fallen by 80% during the previous 30 years, according to Calgary Zoo. Because mobile phones must be made from the highly sought-after mineral coltan, habitats are being destroyed and poached more often.

They would be harmed by poachers if they were creatures left to be in the wild. Zoos have breeding programs and are committed to research and conservation to prevent species extinction.

Sometimes, they are better off protected in exchange for their freedom so they can survive. We are hoping that they regain their population, and maybe someday, they can be released into the wild again.

We were astonished by the once-in-a-lifetime experience that was the Simba moment. It only goes to show that a mother’s love and pride go across all types of creatures, human or not. With a mother’s love such as this, we hope that the baby gorilla will grow up to be a strong and healthy creature so it can help furtherly save their species. It’s a full circle!

Watch the video below to witness the Simba moment.