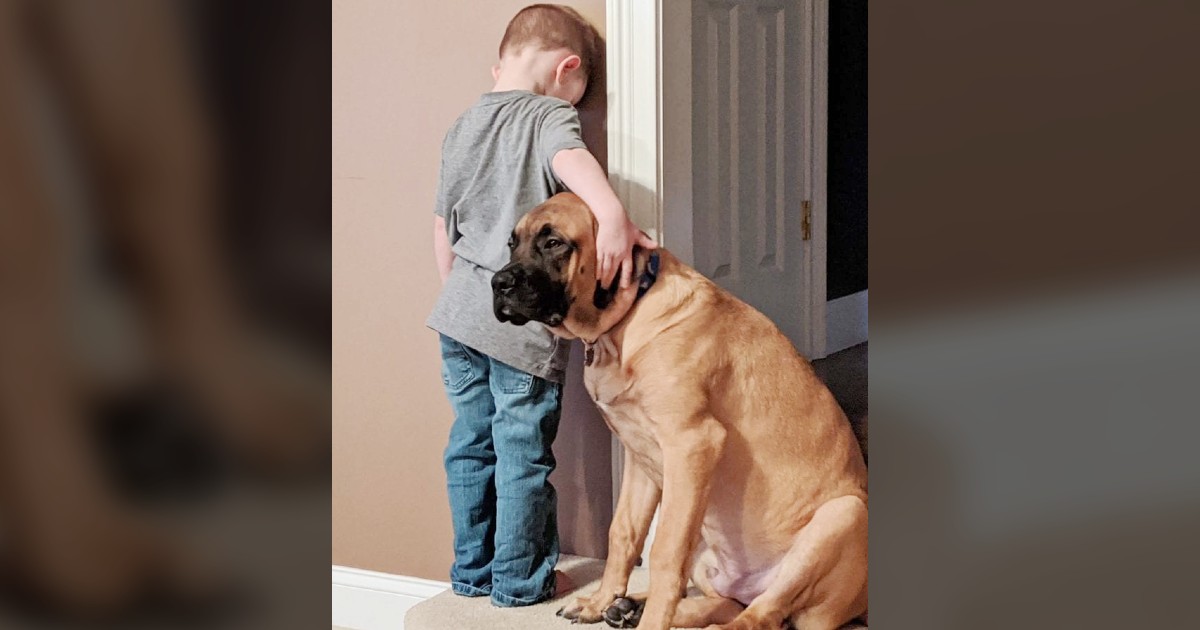 As a kid, getting sent to time-out is the worst. Even if you’re only in the corner for a few minutes, it can feel like forever. But there’s one way to make time-out a bit easier: doing it with a friend.

That’s what happened for a boy named Peyton when he was sent to time-out.

His mom, Jillian Smith, shared an image on her Facebook recently of Peyton standing up against the wall as punishment after being bad. Much to her surprise, the family dog stayed by his side throughout the entire incident.

“When you’re in time-out but your best pal won’t let you serve your time alone,” the Facebook post reads.

The picture Smith captured is pretty hilarious. It shows Peyton at the entrance of the room facing toward the wall with his head down.

Sitting next to him is his good friend the English Mastiff — a dog that is almost twice as big as he is.

A full-grown Mastiff can weigh as much as 230 pounds.

They are truly giant animals, but as long as you have the space, they make great pets.

Peyton’s arm can be seen wrapped around the pup’s head, holding him nice and close.

He provided tons of emotional support to the child during the distressing ordeal. They are best friends, so if one of them gets punished, they both suffer through it together.

Reportedly, three-year-old Peyton was in trouble for fighting with his sister.

He was given the choice between going to his room to serve his time or standing in the corner. Of course, he chose the corner. With his friend standing by his side in solidarity, the time would pass by so quickly.

Normally, a time-out is supposed to be spent thinking about what you did wrong. However, we can’t blame Peyton for getting distracted with the dog. It’s not his fault at all.

If the dog wants to come up and plop down next to him while he is facing the wall, it’s out of his control.

He is certainly not going to complain about it or shoe him away. The pup is his best friend and is loyal to a fault. Luckily, Peyton’s mom saw the situation in the same light.

She found the whole incident quite humorous.

“I couldn’t be mad long because it was just so cute how Peyton wrapped his arm around Dash,” Smith told The Dodo. “When Peyton had to go to time-out, I think Dash knew he needed his buddy.”

Thousands of other people on social media agreed as well.

As soon as Smith shared the picture on Facebook, it immediately started going viral. It has been shared over 52,000 times.

People found it absolutely adorable and they couldn’t resist chiming in to give their take on the situation.

“That is adorable to see the closeness between the two,” writes one woman.

This family owns two English Mastiffs and they are both absolutely lovely. They’re great companions.

As this Mastiff shows, they’re the most loyal dogs around. They’ll be with you through thick and thin — and keep you company when you’re stuck in the corner.

Check out a video about Peyton and his Mastiff below!