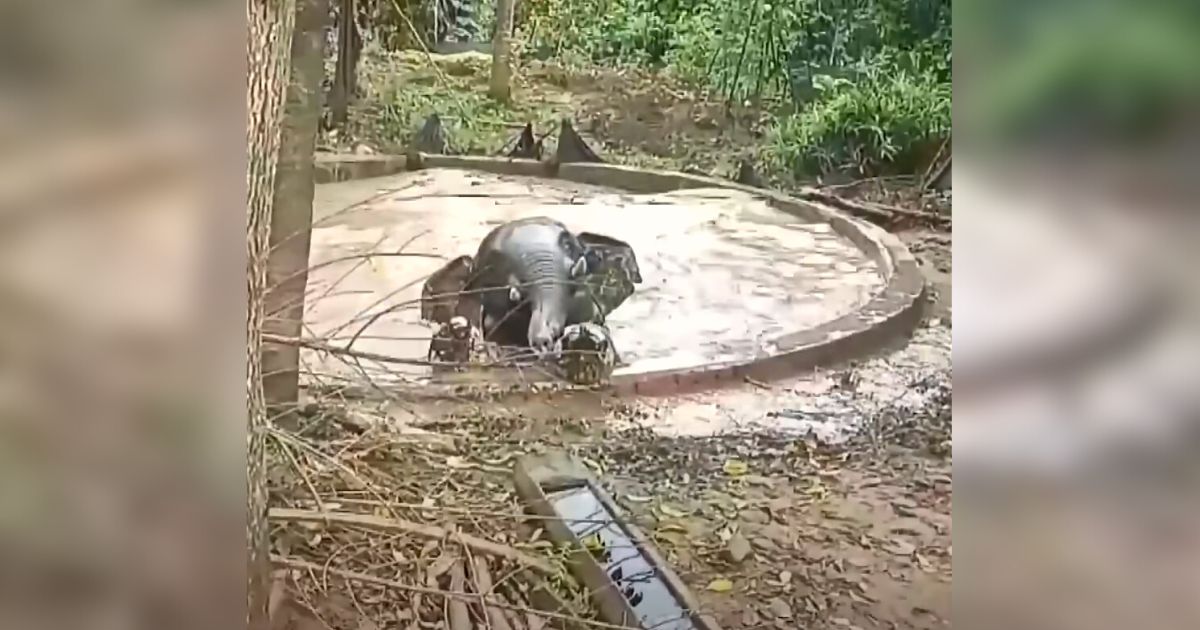 In China’s Yunnan Province, locals reported that four elephants fell into a deep pond in the middle of the forest.

It must have been raining at that time or just rained because the surrounding area was very muddy. And the elephants may have slipped and fallen into the pond.

The local residents, who saw the elephants in the pond, alerted wildlife officials to help rescue the elephants.

Saving them was a community effort.

There are only 300 Asian elephants in existence in China and for the local residents, it was a community effort to protect these remaining elephants.

When the officials arrived, three of the four elephants had already managed to escape the pond.

There was still one elephant remaining.

They tried to figure out how to rescue the elephant out of the pond.

They couldn’t get into the deep pond and push him out because the elephant was too heavy for them. Elephants after all weighed an average of 11,000lbs.

And they won’t be able to pull him out for the same reason.

There was one solution.

It was offered by one of the locals. They could break part of the pond wall and give the elephant a chance to pull himself out of the pond onto solid ground.

It was their best shot.

The resident grabbed a sledgehammer and pounded the wall away. He broke just enough of the concrete wall to give the elephant enough leverage.

And it worked. The elephant saw the broken wall and it was enough to pull himself up and out of the pond.

Thank goodness, the elephant was out of danger now.

“After the elephant got out, the elephant kept looking back at us. We thought it was expressing its gratitude. It gazed at us for about two minutes before leaving,” Chen Zhiyu of the Liushun Town Forest Service Center shared.

“The intelligence of the elephant to climb out through the broken part of the wall. Awesome job to the people who helped,” R m said.

Elephants have a long memory.

“Those elephants have good memories he’s going to remember that for as long as he lives,” JourneyMan Smitty added.

Even if these local residents do not work for the government, they still recognize the importance of protecting the few hundred remaining Asian elephants in China.

“Human population growth, rapid urbanization, infrastructure development, and commercial agriculture expansion all contribute to habitat loss and fragmentation, the most significant threat to Asian elephants. Since 1988, the Asian elephant has been designated a Class 1 protected animal in China’s Wildlife Protection Law,” IFAW (International Fund for Animal Welfare) reported on their website.

It’s a good thing the local residents stayed calm during this entire ordeal. It’s thanks to them that the elephant was able to get out and rejoin his herd.

See these locals band together to rescue an elephant in the video below!

Parents of 12 working multiple jobs to support their family get Christmas miracle from stranger
What do you want to get from your Secret Santa?
0 806