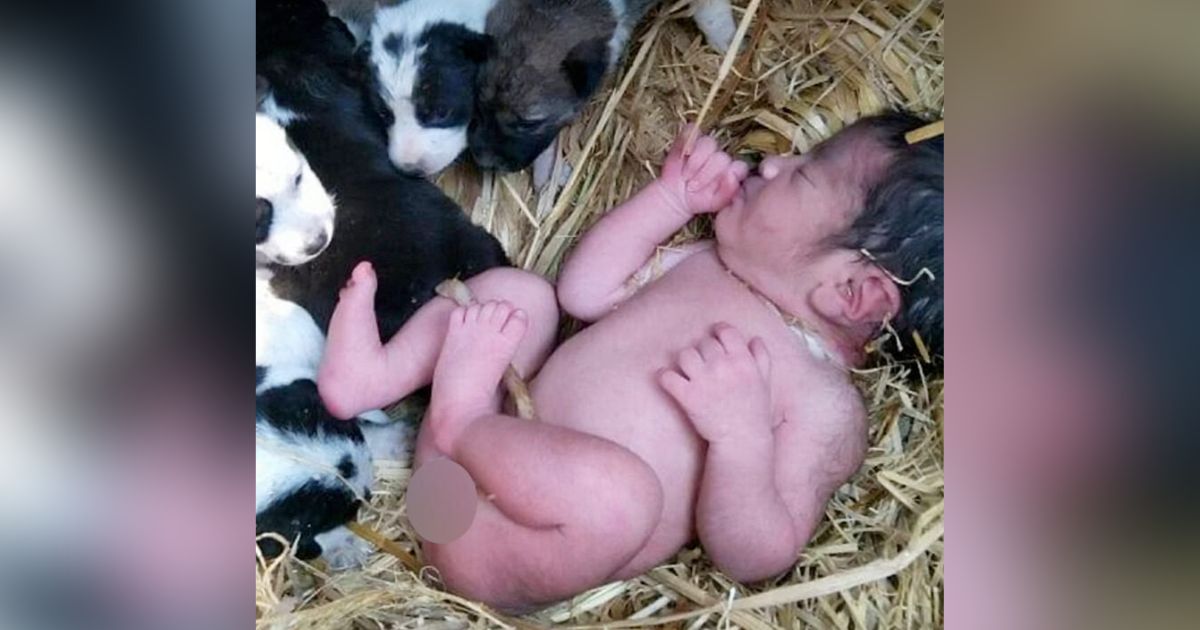 A mother knows no bounds when it comes to protecting a child. Even if it isn’t their own.

Or even their own species.

A mother dog, who was caring for her own litter of puppies, took in a newborn human baby as her own.

A newborn girl was found abandoned in a field in the Chattisgarh province of India being protected by the female dog and her puppies.

The child was found snuggled up as if she was one of the little puppies.

It is believed that the warmth of the momma dog and her babies may have kept the infant warm and saved her life.

“Usually, the temperature dips at night and it’s already December. I must say, it’s her sheer luck,” local officials said.

The child was found naked with her umbilical cord still attached.

Thankfully, the child was discovered uninjured by locals after it was crying.

“At 11 in the morning, we saw that there is a newborn baby girl who was crying and lying alongside puppies in our village,” locals said.

Apparently, someone thought it was a good idea to photograph the naked child sitting in straw with stray animals before getting her warm.

Locals contacted the panchayat, a local government body, who called for the police.

The police took the child to a hospital for an evaluation where she was referred to the ChildLine Project.

“We panicked and informed the health department before the newborn was taken to the hospital for further checkup,” said those who found the child.

Police opened an investigation into the matter and were searching for the girl’s parents.

It is believed that the mother dog kept the baby safe throughout the entire night in the village of Saristal, located in the Mungeli district.

There were some other stray dogs also found hovering around the child, but the mother dog was keeping her safe.

Local officials said they were saddened to see a child left in such conditions.

Police said the girl may have been left because of her sex.

“If you are mentally ill to think of discriminating between a boy and a girl child then you do not deserve to be a parent. The culprits should be strictly punished under the law. Stop such sins. Give up on your narrow-mindedness and consider boys and girls as equals,” IPS Dipanshu Kabra, a local officer, wrote on Twitter.

The infant was named Akanksha, which can be translated as wish or heart’s desire.

The momma dog likely took in the human infant because she assumed that she was an addition to their pack.

And because dogs just love babies.

According to the AKC, dogs are tightly bonded and have a strong pack drive.

It was likely that the female dog’s motherly instincts also kicked in.

The newborn was a bit bigger than her puppies but not by all that much.

Learn more about this incredible story in the video below.

In a rare public appearance with his girlfriend Alexandra Grant, Keanu Reeves appears positively radiant.
Actor Keanu Reeves has long been considered to be a
0 123