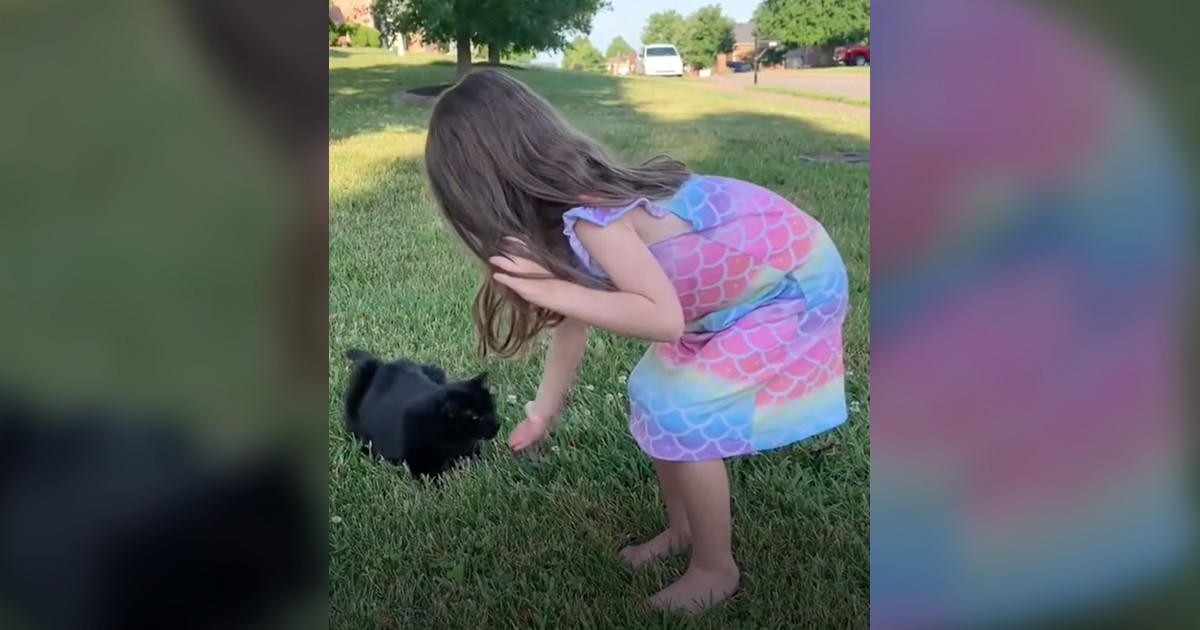 When some cats see little kids coming their way, they make a run for it. But not Binx.

Binx loves the kids in his neighborhood. Especially one in particular named Lainey.

Lainey and Binx became friends when Lainey would take daily walks with her family.

This was in 2020 during the COVID-19 pandemic, and Lainey couldn’t play with other kids.

“Back in March 2020, we started taking daily walks around our neighborhood which is when we first met Binx. He took to our daughter quickly and started greeting her as soon as he saw her coming,” said Lainey’s mom, who goes by thecolorfulmother on TikTok.

At first, Lainey would just walk straight up to Binx and he would let her approach him.

Some cats are wary of children because they are nervous about their sudden and erratic movements.

But Binx had no fear of Lainey. Eventually, he would run up to greet her before she could even get to him.

“He [Binx] became a sweet friend to her during such isolating times with no kids to play with,”mom said.

Binx and Lainey remained friends for the years after the pandemic and the two of them would always look forward to seeing each other every day.

“The love has lasted through the years. He even comes to visit us at our house,” said mom.

According to an Oregon State University study, “the majority of cats use humans as a source of comfort.”

So, maybe that’s why Binx like Lainey so much. Or he just thought she was really cool.

Anyway, they hung out a lot over the last few years.

But unfortunately, their frequent meetings would become short-lived.

One day during a recent walk, Lainey and her mom spotted a “For Sale” sign in front of Binx’s house.

That meant that Binx was moving and Lainey would have to say her final goodbye to Binx.

“We are very sad but thankful for the joy he brought her when we all really needed it,” mom said.

Lainey’s mom caught the final goodbye on video and it had her in tears.

Then she posted it on TikTok and had the rest of the internet in tears.

“I sobbed at the end – our sweet neighborhood pets definitely hold a place in our hearts,” wrote one TikTok commenter.

“He wanted your little daughter to remember that unlike many people think, black cats are awesome! And maybe one day she’ll remember and get one,” another commenter said.

“Thank you so much for making this. Binx had a really special relationship with the kids in our neighborhood l. It was just so beautiful,” said a neighbor.

You can see Lainey and Binx’s final moment together in the video below.