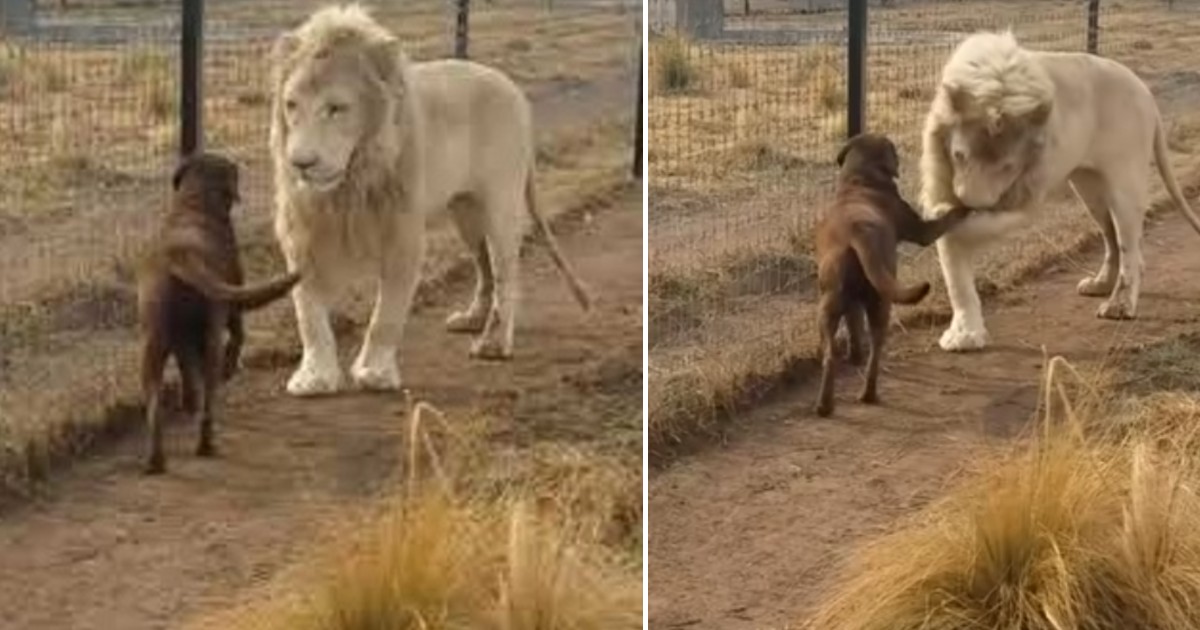 There has to be no stranger friendship than that of a lion and a dog. Lions are known for being one of the fiercest predators in the world, and it’s rare for these magnificent creatures to develop a friendship with an animal that would usually be considered prey. But there are some lions out there who defy all odds, managing to obtain friendships with humans and other animals – and now seems like a great time to introduce you to Miki the lion.

This special lion has been friends with Camila the dog all his life, and the sanctuary workers where they live often manage to catch videos of adorable exchanges between the two. In their latest video, Miki can be seen as the perfect gentleman, as he takes Camila’s paw to kiss.

But little does he know that Camila simply isn’t in the mood for affection, and when he tries to lift her paw again, she turns and stalks off in the other direction.

The video was posted onto YouTube for us all to see, and we just knew that we’d have to share it with you.

Miki the lion was brought to the Black Jaguar-White Tiger Foundation in Mexico City with chocolate lab Camila after the two friends were discovered together. According to the foundation, the pair “have been together all their lives, way before we rescued them. And if they’re not together, they get super nervous.” And while no one knows how the two first came across each other, it’s clear to see that their special friendship is still very much alive today.

“An amazing bond between two friends since they were young. A mighty white lion and chocolate lab. Watch as the lion goes and kisses the dogs paw. Video shot at the Black Jaguar White Tiger foundation as part of Toyquest101 visit to the foundation.”

Since being posted in 2018, the video now has an amazing 26.9 million views, as well as hundreds of thousands of likes and comments.

In the short clip, Camila can be seen approaching Miki, who politely gives her a kiss on her paw.

But as Miki attempts to repeat his action of affection, Camila has clearly had enough, and she turns and marches away. Miki instantly seems to feel remorse and chases after his friend – and we wish we knew what happened next!

We don’t know about you, but this video slightly reminds us of an argument between a husband and wife – with the lion being the guilty husband, of course. And we weren’t the only ones who found is so comical! Many people took to the YouTube comments to express their opinion about the video, with one person joking:

“The dog was moving too slow, so the lion told him to mufasa.”

Many people also speculated that the dog was in danger, but luckily, these two are long-standing friends! Watch the hilarious video for yourself below.

In a rare public appearance with his girlfriend Alexandra Grant, Keanu Reeves appears positively radiant.
Actor Keanu Reeves has long been considered to be a
0 148