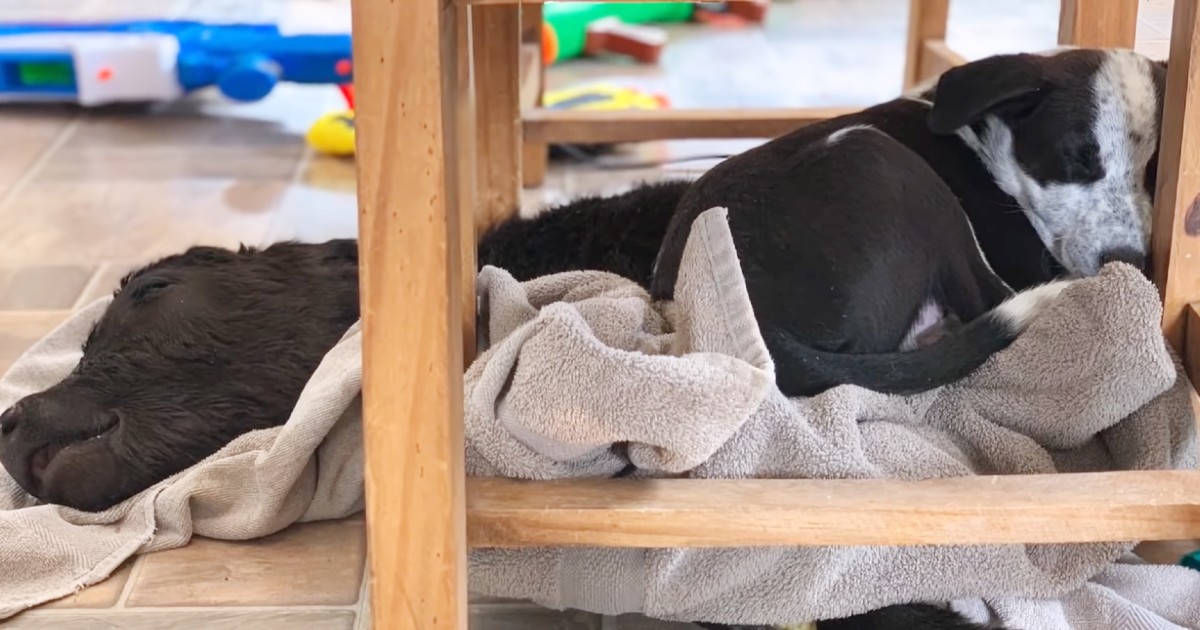 A sweet calf named Valentine had a hard start in life. She was born on a freezing Valentine’s Day, and she looked ‘lifeless’ when she was born.

Her family rushed her inside to warm her up, but they weren’t sure if she was going to make it.

The family quickly brought Valentine inside and wrapped her in some warm blankets close to a heater. They hoped that in time, the calf would become stronger again.

But she was so cold that she was barely responding.

Valentine was incredibly weak, and could barely even open her eyes, let alone move her legs. But just as the family’s hope began to dwindle, something surprising happened. Their puppy came into the room to see what all the fuss was about, and made a straight beeline towards Valentine.

Despite only being a baby himself, the puppy took on some motherly qualities and began to lick the calf’s head.

Valentine was still incredibly weak, and after a few minutes of licking her face, the puppy realized that he needed to do more to help her.

He could feel that the calf was still cold, so he decided to lay right next to her and give her a cuddle, using his own body heat to warm her up.

The puppy was truly committed to helping Valentine, and he lay next to her for hours.

After some time had passed, he left her side only once – to let her family know how she was doing. Thanks to the puppy’s love and care, Valentine was beginning to move around more. She was getting warmer and stronger, and she seemed much more alert than before.

As the family went to get some warm milk for the calf, the sweet puppy continued to lick Valentine’s face, causing her to let out her first ‘moo.’

The puppy couldn’t help being a little bit surprised to hear her speak!

Finally, Valentine was able to stand up and drink. She wasn’t fully back to normal yet, but she’d already come on leaps and bounds since she’d been brought in- and it was all thanks to the puppy.

That night, both puppy and calf remained firmly by each other’s side as they slept. And by morning time, the calf was ready to return to the field.

Now it was a waiting game to see if her mom would recognize her.

There was a tense moment as the calf stood alone amongst the herd – but then a cow can be seen walking towards Valentine. It’s the mama cow!

As soon as Valentine’s mom picked up her scent, she knew straight away that her baby had returned. The calf headed off happily with her mom – though we bet she’ll never forget the sweet little puppy who nursed her back to health!

It’s so wonderful to see these two baby animals’ friendship. They’re so sweet together.

Check out the heroic pup’s actions in the video below!