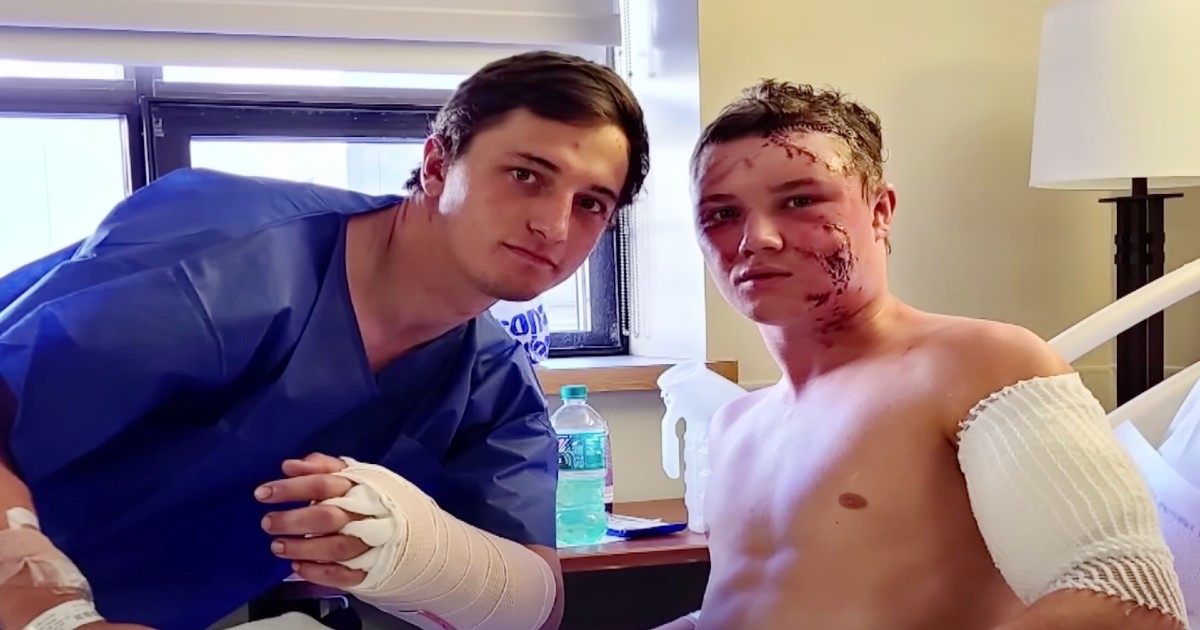 College wrestlers Kendell Cummings and Brady Lowry, along with two more friends and fellow team members at Northwest College in Powell, Wyoming, were attacked by a grizzly bear a few days ago.

The college students were antler hunting, when they noticed bear marks on the ground.

In fact, it was Lowry who, on his way back to his car, noticed the bear marks and told his friend, Cummings. Only moments later, the bear made its appearance.

When the young man “started hearing crashing coming through the tree”, he yelled “bear” to warn his friend, but it was too late. The bear was already after them.

In no time, the grizzly bear had tackled him, causing him to fall “about five feet off a small ledge”.

“It started chomping on me pretty good. It got a hold of my left arm, it was shaking me around, broke my left arm,” Lowry told CNN affiliate KSL.

Cummings, who was also there watching the whole thing, could not just run for his life leaving his best friend behind.

So, he started yelling hoping to distract the bear, but it didn’t work. That’s when he started throwing things at it- again in vain.

Not knowing what else to do, he decided to attack the bear himself in order to save his buddy.

“[H]e jumped down and grabbed the bear … and yanked it off me,” Lowry recalled.

The bear then focused on Cummings. It “chewed him up a bit”, as he said, and then it stepped back for a moment or two.

Right when Lowry was approaching Cummings to check on him, the bear returned, and this time things got even more serious.

It bit Cummings on the head and cheek, and then headed back into the forest. In the meantime, Lowry had called 911 and the emergency responders had rushed to help them.

Lowry had also found their other two teammates from whom he and Cummings had separated during the hike.

The three of them went back to the mountain to look for Cummings. When they finally found him, he was “limping down the mountain, drenched in blood”.

“(Cummings) asked me how he looked and I said, ‘You look great, we’ve gotta go!’” Lowry said.

The young men were taken to a Billings, Montana hospital where they were treated for their injuries.

“We become best friends going to hell and back with each other. Seeing someone sweat and bleed … coach teaches us that. You aren’t going to leave a brother behind,” Lowry explained.

Cummings, who was the one who suffered the most severe injuries, is thankful to his friends for being alive.

It was really a horrifying experience that only made them stronger and tightened the bond between them all.

The local authorities have since confirmed the bear attack, as well as warned that there are at least “six to 10 different bears moving between agricultural fields and low elevation slopes”.