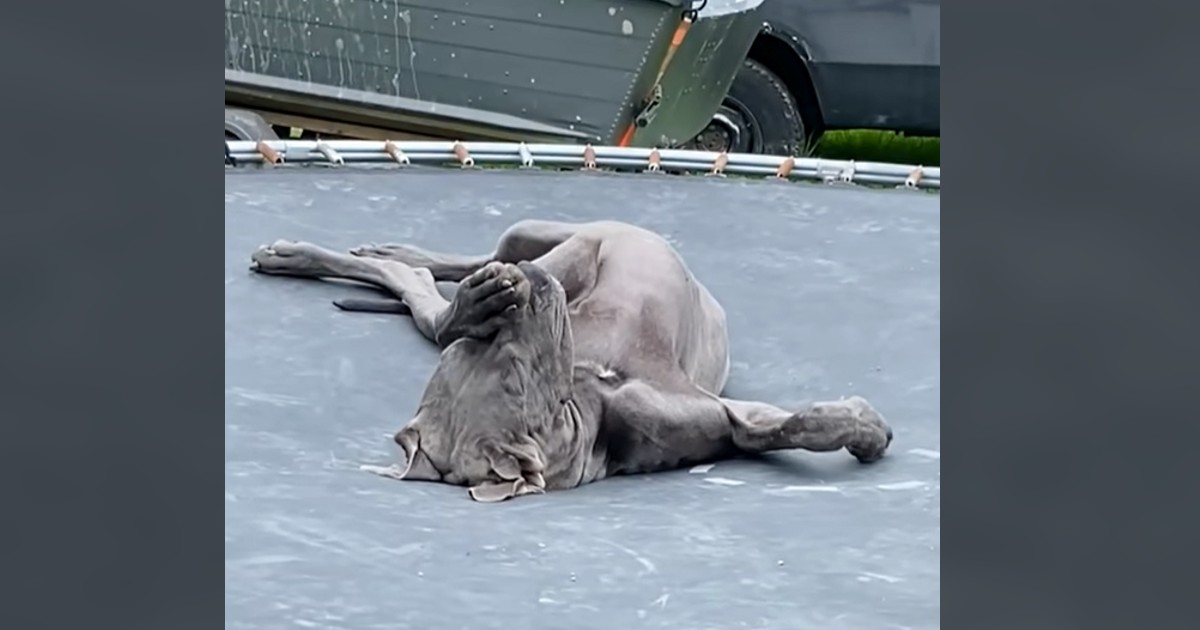 Great Danes are a pretty massive-sized breed of dog. Known as the “Apollo of Dogs,” these guys grow to be about 30 to 34-inches tall at the shoulder and can weigh 120 to 200 lbs.

That’s why one family from Niagara Fall in Ontario, Canada decided to name their 10-month-old Great Dane Moose to honor the Great Dane’s large frame.

But Moose is still a puppy and has yet to reach his full size.

So, he decided that he wanted to play on his family’s trampoline before he got too big for it.

Well, he wasn’t exactly playing on it. He was napping on it. And not just a light cat nap.

He was in a full-on deep sleep lying on his back with his hand over his face. Apparently, his mom didn’t like the idea of the dog napping on the trampoline.

So, she opened up the porch door and called out to him yelling, “Moose.” Then she made a kissy noise at him but it still didn’t get his attention.

Moose was still far into Slumberland.

So, mom called his name again. And again.

“Oh my God,” she said, shocked that Moose wasn’t phased by her calls.

She called him again. Still, nothing. Moose was in blissful comfort during his sleep and looked very happy exactly where he was in the middle of a happy dream.

Mom finally resorted to whistling to try a wrestle Moose from his slumber.

And it worked. The whistling sound was able to break through Moose’s deep sleep and rouse him.

But he wasn’t really happy about it. He didn’t seem too pleased and wasn’t ready to fully leave cozy mode.

He just flopped over and looked at his mom like, “Why are you waking me up?” Except his body was all flopped around weird and twisted, which made his reaction even more hilarious.

“Why is he positioned like a fallen gargoyle?” said one person who commented on a video

Mom seemed to be confused by his positioning too.

That should have been pretty obvious. He was sleeping and thoroughly enjoying it until mom came along and woke this poor guy up from his chill time. Moose’s little nap has millions of followers hysterically laughing. Not just one or two million either.

Viral Hog shared the video, which was viewed more than 12.2 million times.

“Clearly, Moose was sleeping and was in the zone. There was no need to interrupt his slumber. He is adorable,” said one YouTube commenter.

“Look at the way he’s sleeping. He got tired of jumping now he’s taking a good nap,” said another.

“Moose had the, ‘I know you ain’t just wake me up to ask me no dumb question’ face,” and another.

Everyone was in absolute stitches over this video over his reaction to being woken up. If you’re in need of a laugh today, check out the video below!