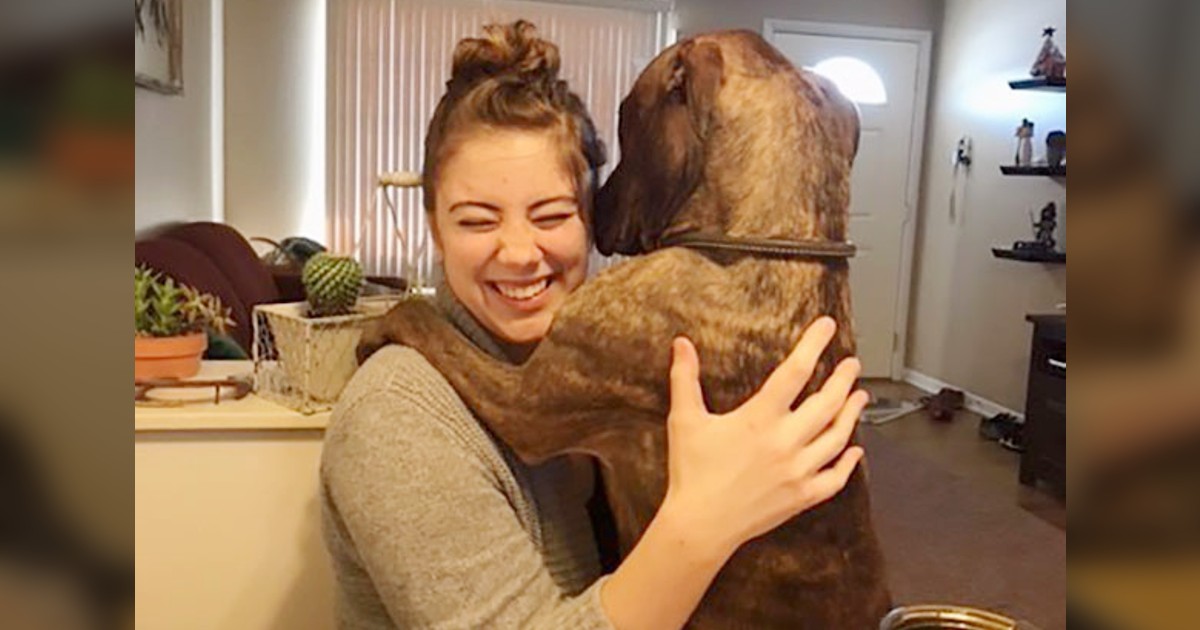 A dog named Kylo Ren is one of the goofiest and sweetest boys around. He loves his family so much and he isn’t afraid to show it.

One of his absolute favorite things to do is to hug his mom and cuddle up in her lap.

While Kylo is now as happy as can be, he did have some trouble finding his forever home.

He was brought into the West Memphis Animal Shelter when he was just ten months old. Soon after he entered the shelter, he was pulled out by ALIVE Recuse Memphis. This group rescues homeless animals and animals who are in kill shelters. They do everything they can to find these animals good homes.

Kylo spent a long time in a foster home. The rescue group was surprised that he wasn’t receiving any applications, but finally, the perfect one came in from a woman named Meghan Sweers.

“We saw his picture on Facebook and reached out,” Sweers told The Dodo. “I think he was always meant to wind up with us, it just took some time for us to find him!”

Sweers and her husband decided to do a trial night with Kylo to make sure that he got along with their other dog, a corgi named Nellie.

Thankfully, everything went off without a hitch. A volunteer from ALIVE Rescue Memphis brought Kylo to Sweers’ house. Kylo immediately made himself at home.

“As soon as they left he crawled into my lap, tucked his head under my chin, and started snoring like a chainsaw. From that moment my husband and I knew he was staying with us!” Sweers told The Dodo.

Once Kylo was officially adopted, Sweers and her husband learned about some of his funny quirks.

It turned out that he was afraid of hardwood floors, so Sweers covered her entire house with rugs. Kylo jumps from rug-to-rug, and he never touches the dreaded hardwood floor.

Some of Sweers’ family members were nervous around Kylo at first because he is a bully breed.

Bully Breed dogs are descended from the ancient Greek Molosser stock, and they typically have short muzzles and large bones and muscles. Some common types of bully breeds are Boxers, American Pit Bull Terriers, Bulldogs, and Boston Terriers.

Bully breed dogs have gotten an unfair reputation for being aggressive, but most bully breeds are sweet and intelligent animals who make good family pets. Kylo shows a great example of how friendly and lovable bully breed dogs are.

He was even able to change the way Sweers’ family members feel about bully breeds.

“Many of our family members who were very prejudiced against bully breeds have changed their tune after spending time around him,” Sweers told The Dodo. “He wins people over a bit forcibly … by climbing into their lap and falling asleep.”

While Kylo enjoys meeting new people, he is first and foremost a mama’s boy.

He waits by the door every night until Sweers gets home from work. Once she walks in, he immediately hugs her.

Sweers has learned that it’s best to just let Kylo have his cuddling time. “If I don’t sit down for our cuddle time he follows me around with the saddest most pathetic look on his face until I give in and hold him,” Sweers told The Dodo.

Kylo is the sweetest pup around, and he’s helping to break stereotypes about bully breed dogs. If you want to see more photos and videos of Kylo, head to his Instagram page.

Check out a video of Kylo being his adorable self below!