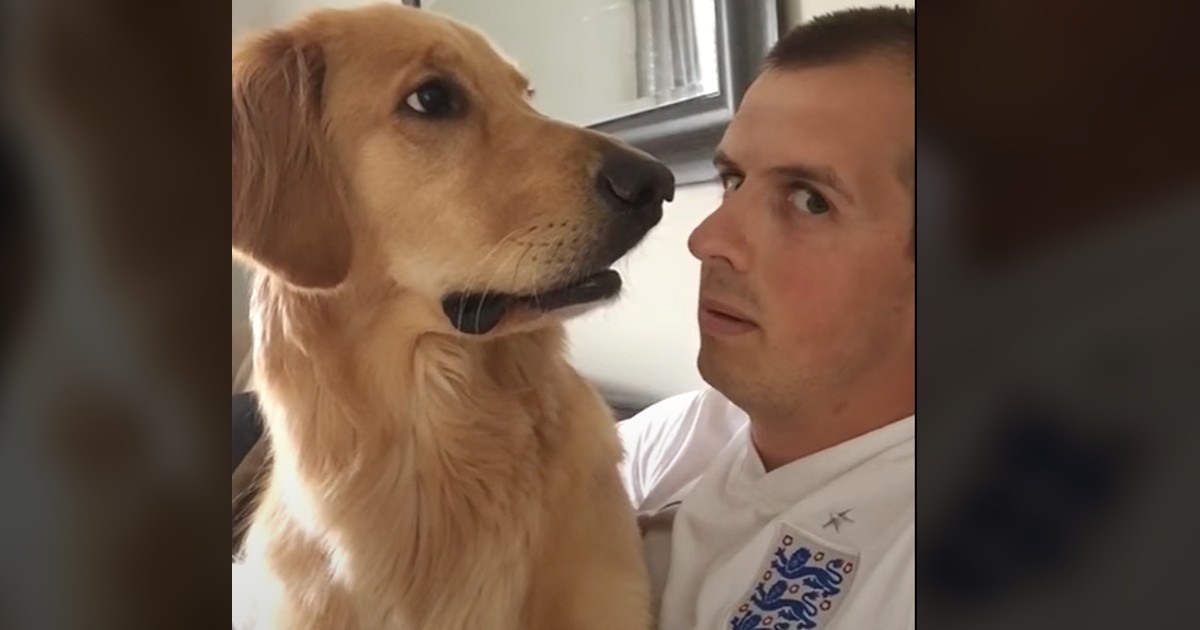 Family is the most important thing in the world. Even John Bache’s Golden Retriever thinks so.

That’s why the news that he was going to have a human baby brother took him completely by surprise.

And in the most hilarious fashion. The surprise announcement was even caught on video.

It starts with him sitting on his human dad’s lap when dad announces: “Someone is going to have a baby brother.”

Before the news was sprung on him the Goldie looked super happy. Panting with a big old smile on his face. But after his entire face changed.

That grin went flat and he looked straight at his dad in astonishment.

Nose-to-nose with his dad, he let the shocking news set in.

Dad returned the same look before moving the camera to get the dog’s reaction from another angle.

That’s when the pup’s face returned to a smile.

A less vibrant one, as he was still a little surprised.

But then dad reminded him again.

It’s not that the Golden wasn’t excited. He just wasn’t expecting the news.

Or his dad to break it in this abrupt manner. In fact, Golden Retrievers are known to love children.

“Golden retrievers are great with kids. They’re sweet, playful dogs that love being part of a family. They have the ability to be soft and gentle around babies and toddlers, but can also play rough and tumble with older kids, adults, and other dogs, too,” Golden Hearts writes.

Children can also benefit from having Goldens around as they can teach children responsibility and will always have someone by their side.

Still, this Golden’s reaction was quite the humorous one.

So humorous that it’s been viewed more than 1.9 million times.

“I don’t care how many times I see this, I crack up every damn time!” wrote one viewer.

Sure enough, when the dog’s actual baby brother was born, he couldn’t have been happier. He absolutely doted over that baby.

In a follow-up video by Bache, we see the Golden with the biggest grin ever, wagging his tail wildly as it thumps up and down on the carpet.

He’s so happy because his baby brother has finally arrived. And he’s standing right next to him! This sweet doggo looks like he couldn’t be more excited.

Like it’s the little brother that he’s always wanted. He’s sitting as close to the little baby as his parents will let him get. And he seems overjoyed to be exactly where he is.

“He’s happy just being there. What a good boy,” writes one commenter.

“Lovely! he looks very pleased with the baby brother,” said another.

“He got his wish!” and another.

Though he may have been a bit surprised at first, this Golden looks thrilled to have a new best friend.

Parents of 12 working multiple jobs to support their family get Christmas miracle from stranger
What do you want to get from your Secret Santa?
0 877