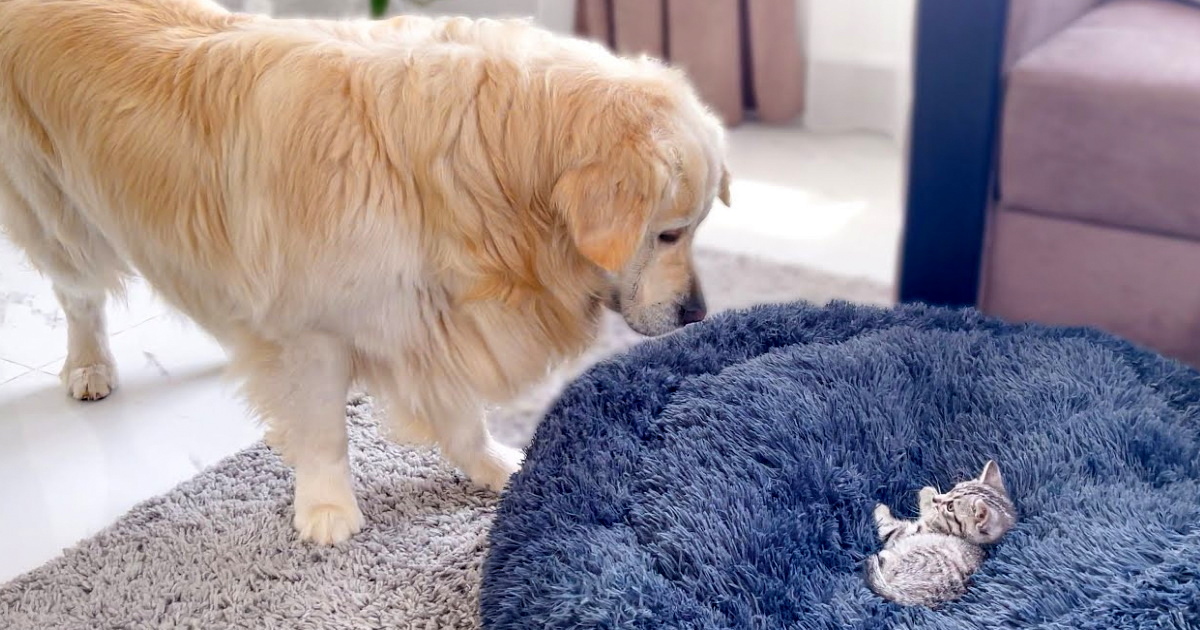 If you have a house with both cats and dogs, it’s likely you’ll find them playing a game of, “Whose bed is it anyway?”

You might buy that new bed for your big dog but, rest assured, your cat might be the one to claim it.

But who is to blame? Figo Pet Insurance says they both are.

“We admit sometimes cats can be jerks and sometimes dogs are just big babies. Cats like to be cozy, typically inside a box or small spaces. Other times, they seemingly want to show the dogs of the house who is really the leader of the pack,” their website writes. “The dogs are either too polite, scared of confrontation, or too tired to put a fight. Probably all three.”

And that’s when dogs will look to their humans to try and settle the dispute.

The Golden Retriever in the video below came into the living room ready to take a nap in his big soft fluffy bed.

He instantly smelled that something was off and ran over to the bed only to find that the cat glomming it.

The cat then looks up at him like, “Scram dog!”

This doggo is clearly distressed and starts shuffling around the perimeter of the bed.

His annoyance could be heard through his continual huffing.

This good boy continues to pant and circle the bed as if the cat is just going to kindly give it up.

He even barks at her, but this tiny kitten is pretty cozy and isn’t going to budge.

No matter, this dog isn’t going to give up either. He keeps on barking and nuzzles the big bed.

He looks at his human, who is filming the ordeal, as if he is asking for a helping hand.

When he isn’t given one he decides that he has to get a little more aggressive with the cat.

So, he circles the other side of the bed and barks at the cat. He then nuzzles his head under it to try and nudge the cat off without suffering the wrath of a claw to the head.

He then gets real bold and flips half the bed over.

Still, the cat is not phased. He then nudges the entire bed trying to turn it over completely and empty the cat off of it.

But it doesn’t work so well and the tiny kitten in the middle of the bed just gives him a little meow.

It’s clear that that this dog must take more extreme measures and he decides to try and drag the bed away with his mouth.

His efforts are futile and he looks as if he’s about to give up. So, he just lays down beside the bed and pants for a while to take a rest and think of a new plan.

So, he nudges himself onto the bed. And the cat is totally fine with it. But he isn’t and he wants his bed back. He barks at her and tries to knock her off but he only gets a hiss from the cat.

Eventually, he ends up halfway on the bed. Then on the side of the bed.

That’s when the cat discovers there was an even better bed all along. The dog! So, she climbs up on top of him as he lays on the floor next to “their” bed. And now that they are close and cuddling, they both seem pretty pleased.