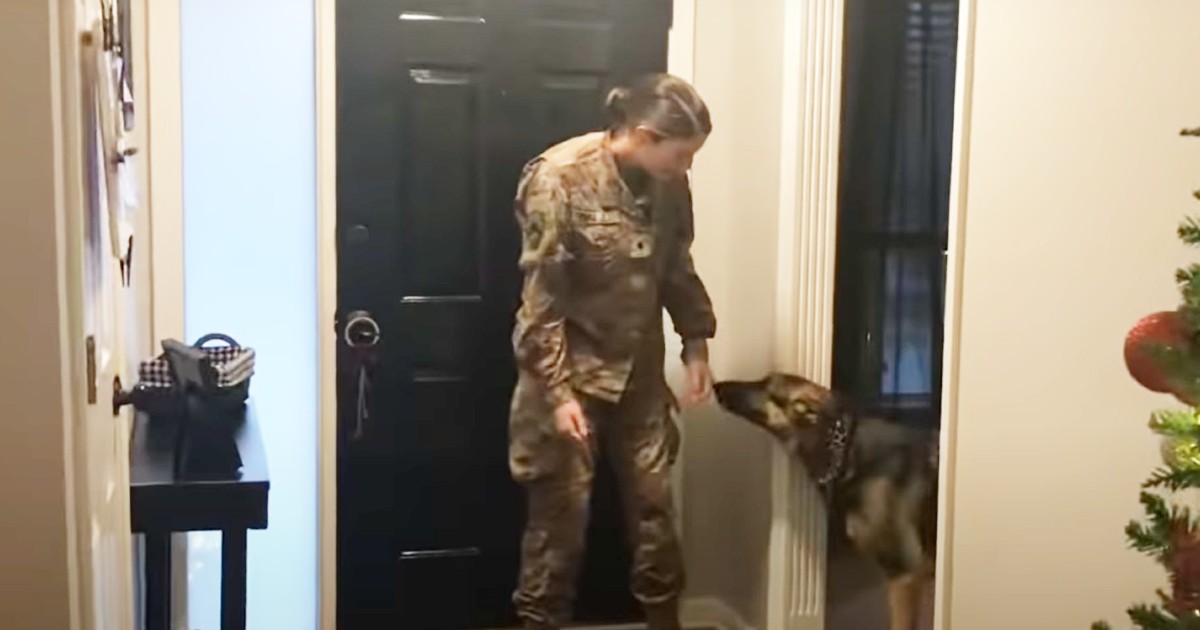 When someone in the military is deployed, they’re always missed by their loved ones. While being apart is difficult, the homecoming is always incredibly sweet.

As we know, humans aren’t the only ones who miss their deployed family members. Pets can also be sad not having their buddy around anymore, giving them cuddles, or throwing the ball. So it makes sense that they too can become extremely excited when they finally walk through the door!

One dad managed to capture one of these touching reunions on film. Only it didn’t start out quite like some of the others…

A dog named Seiko was just a puppy when her human sibling, Bailey, left for Kuwait.

After a year overseas, Bailey finally returned home and was thrilled to reunite with her loved ones, including Seiko! Yet, since the pooch was so young at the time, would she even remember Bailey?

YouTube user knox2613 shared the reunion video, which starts out with his daughter standing alone at the front door.

Seiko isn’t too happy with “the stranger” at first.

According to the AKC, German shepherds are naturally protective of their family members. So it’s not surprising that Seiko’s initial response is to bark at Bailey, who she doesn’t seem to recognize after their year apart. Several moments later it all changes. Bailey, who’s dressed in uniform, kneels down to greet Seiko.

The German shepherd sniffs her human sister and eventually, the most heartwarming thing occurs… Almost as if it finally clicks – she seems to recognize her!

Get ready to say, “Awww.” The dog’s tail starts wagging wildly with excitement, and she goes nuts trying to give Bailey love.

Although Seiko was just a baby when she left, it appears that she does indeed remember her after all!

Seiko is like an overjoyed child on Christmas morning.

While it’s impossible to know what she’s thinking – it’s almost like she’s saying, “It’s you! It’s you! Where have you been? I have so much to tell you!”

Naturally, Bailey is loving their special moment together and can’t get over how big the pooch had gotten.

A German shepherd that can’t contain herself. After spending time with Bailey at the front door, Seiko’s so excited she needs an energy release. She grabs a toy from the living room and has a case of the zoomies!

She cutely runs from room to room with the toy, making the reunion even more adorable than it already is.

The video is so sweet it’s been viewed over 15million times On YouTube.

It’s also accumulated more than hundreds of thousands of thumbs-ups too, with many people leaving positive comments like:

“Not even a billion stars can make my heart melt the way this did.”

This video is sure to lift your spirits and make you smile. It’s so wonderful to see Seiko’s confusion turn into full-blown excitement once he realizes who’s home.