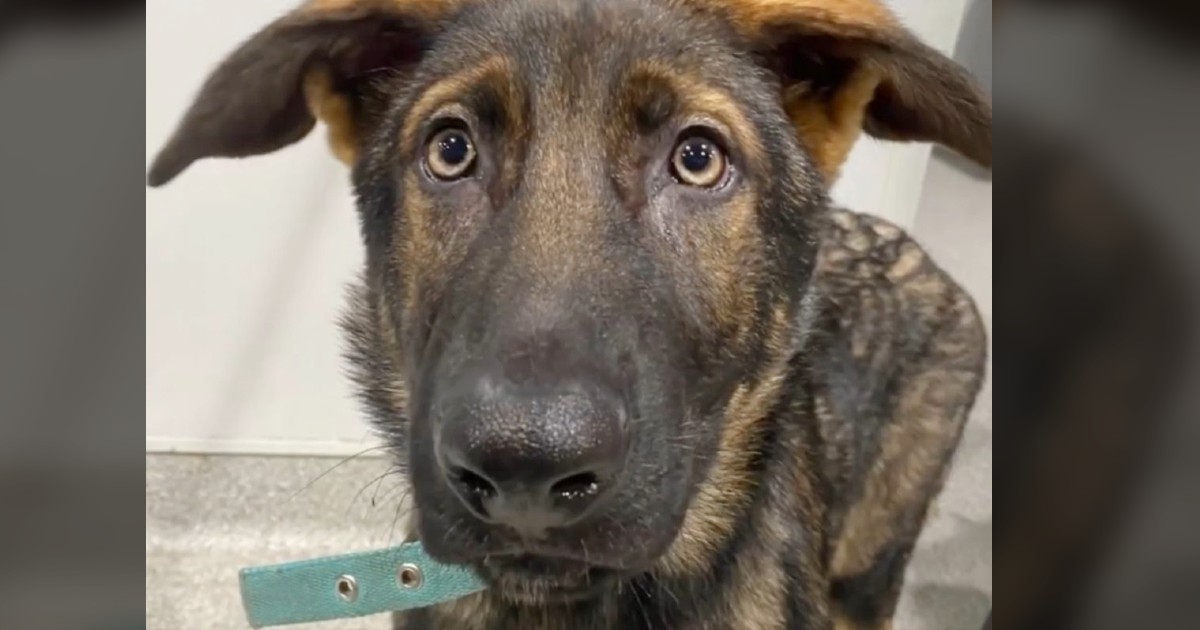 No one knows exactly how Carlile’s life began, but he didn’t have the easiest go at it.

He was found in a dumpster when he was just five months old after some workers at a Tampa, FL car wash heard the sound of his whimpers.

The workers reported the noise to their boss, who began to investigate, only to find Carlile’s big sweet eyes staring back at him.

It was obvious that the doggo was desperate for some help.

And help was immediately bestowed upon him.

Carlile was pulled from the dumpster and exceedingly grateful to his rescuer, as you can see in the photo above. It’s a picture of him still sitting in the dumpster before being pulled out.

Carlile was taken to the Humane Society of Tampa Bay, where the dog could be cared for until he was adopted into a forever home.

Though he had to be treated for hookworm, Carlile was otherwise in good shape and given lots of love and affection from the Humane Society’s staff and volunteers.

The Humane Society of Tampa Bay ended up putting together a compilation of pictures of Carlile set to some music along with a summary of his story.

They show the dog going from being put in the garage to him being amongst people who love him.

According to HumanePro, between 28 and 40 percent of dogs in the U.S. are adopted from animal shelters or rescue groups. About 5 percent of all days are taken in as strays or caught outside.

The Humane Society of Tampa Bay’s video ended up going viral and was viewed more than 33,000 times.

It wasn’t long after this that Carlile was put up for adoption.

Because of his viral stardom, he had lots of applications coming in looking to adopt him.

Carlile had only been in the shelter a week before he was adopted.

By that point, Carlile had a lot of fans.

“Oh my gosh!! Beautiful story!! Sooo relieved Carlile found his forever home !! May your new home shower you with all the affection and love you deserve little guy!!” wrote one Facebook commenter.

“I’m so happy for this pup I hope he gets all the love belly rubs and treats he deserves,” said another.

“That is great news! Now everyone wanting to adopt him please consider giving another animal at the shelter a loving home,” and another.

Carlile went from being carelessly thrown in the trash to living in a house and having a loving family of his own.

The staff at the Humane Society of Tampa Bay and their Facebook fans couldn’t have been happier to see that Carlile was doing so well in his new home.

“I am so happy and so glad someone adopted him so quick! He looks will make a wonderful addition to his new home!” said a Facebook commenter.

But it was that video that really got people’s attention when it came to Carlile’s story.

You can check it out below.