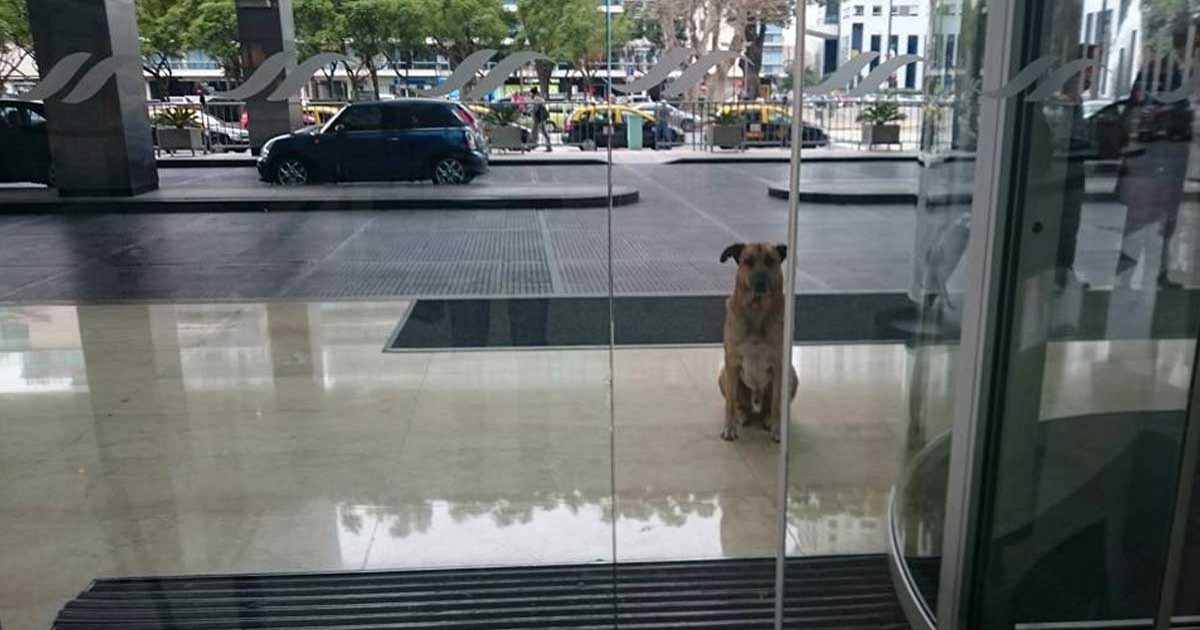 This heartbroken little goober waited very patiently in front of a hotel lobby for his human to finally take him home.

Technically he was a stray at the time, and his would-be owner had no idea that she actually belonged to him…YET!

However, the universe has a magical way of matching people to their perfect animal companions at the right place and right time.

In this case, that human was Olivia Sievers, a German flight attendant who often traveled to Buenos Aires, Argentina as part of her job.

She usually stayed in the same hotel, and after a while, she noticed that there was an unusual hotel amenity that seemed to always be waiting there for her the moment she arrived.

A golden-colored stray who was known to wander around the neighborhood greeted Olivia every time she rolled her suitcase through the hotel lobby.

He was super friendly, but boy did he milk those sad puppy dog eyes!

Olivia would feed him and play with him for a bit, and she even nicknamed him Rubio.

Just like elephants, dogs never forget. And every time Rubio saw Olivia, he’d wiggle his booty tail and then flop over onto his side and demand some belly rubs.

However, at one point Olivia tried to avoid the pup for his own sake!

“I tried to change my way because I didn’t want that he follow me back to the hotel,” she told Noticero Trece. “But it was not possible. He always came back and followed me. I tried one hour, but he always watched me and followed me. He was really happy that somebody gave him attention.”

But it was too late – Rubio had already picked out his human from the thousands that passed him by every day.

The fact that she lived in another country simply didn’t matter to Rubio. He was just waiting for Olivia to realize they were meant to be together.

Olivia continued to feed Rubio, and she even gave him some airline blankets to snuggle up with at night. But, she knew she couldn’t look after the sweet pup 24/7.

So, out of concern for his well-being, she reached out to a local shelter to see if they would be willing to take him in.

But, he pulled a Houdini and made his way back to the hotel where his forever human was staying!

When Olivia’s time in Buenos Aries soon came to an end, Rubio did what he always did and wander around the streets, patiently waiting for her to come back.

It was the same story – every time she flew there for work, the friendly pup was at the hotel waiting for her.

Olivia finally decided that it was time to get Rubio off the streets for good and adopt him! After getting all the paperwork in order, he got to fly back home with her to Germany, where they have new adventures that don’t involve hotel lobbies or sliding glass doors.