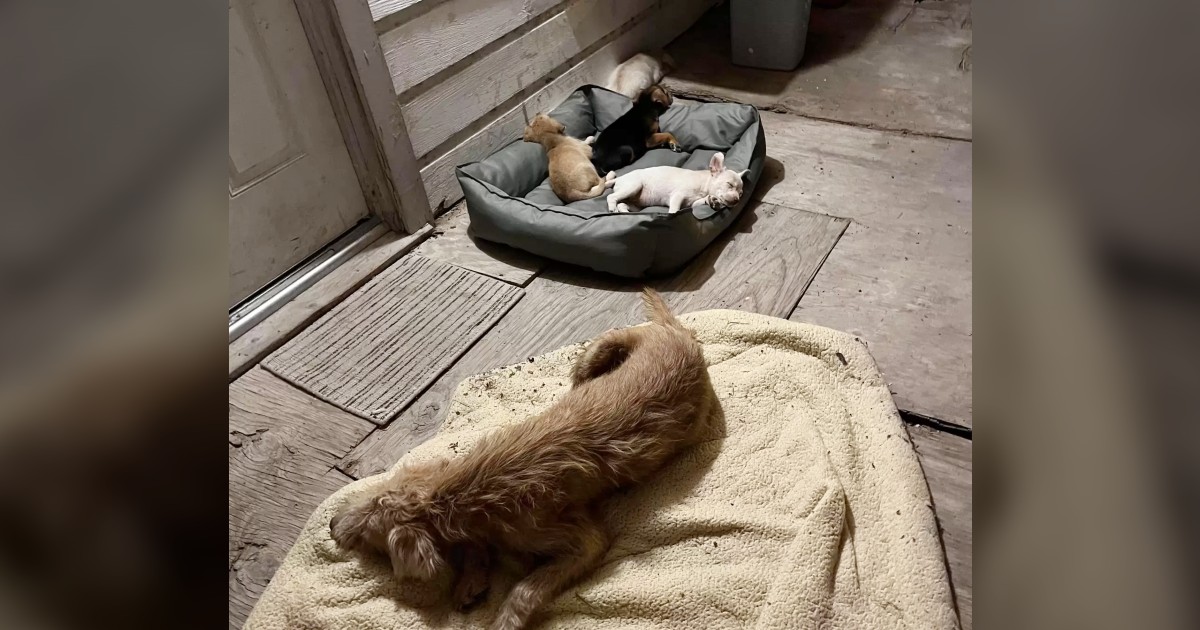 Despite the rough conditions living on the streets can bring, stray dogs will still protect puppies they find from possible threats.

Even if they aren’t biologically related.

“There’s a lot of dog fights [among strays] because of food,” Leslie Hennings told The Dodo. “They’re just starving.”

But a Good Samaritan assumed that the puppies she found a dog protecting were its children.

When the woman tried to approach the puppies, the dog would get in between her and the puppies.

The dog was “shielding them in any way” that he could, rescuer Hennings said.

The dog was trying to put on a tough facade but was really scared himself.

“He was putting up a brave front [as if to say], ‘No one’s gonna touch my puppies,’” Hennings said. “But when it was time [to go], he hid under a car and didn’t want to come out.”

It took some time, but Hennings was eventually able to capture the dog and puppies he was protecting.

She brought the dogs back to her home until their new foster parents were able to come to get them.

Though she didn’t have a fence around her property, she placed blankets and food in the area hoping that they would stay near it.

It didn’t exactly work. The puppies kept wandering off.

But dad was there to reign them in.

“Scruffy homeless boy has adopted 5 stray puppies. They lost their mother at some point. And he is now their gentle protector in the streets. They roam, and he corrals them. But they are wandering off more and more,” Hennings said on Facebook. “This morning three were missing and he left looking for them. Bringing them back. But it’s only a matter of time until the day comes they can’t come back. This single father and babies desperately need a rescue and foster! He can’t protect them forever.

White Rock Dog Rescue agreed to foster the “dad” and his puppies.

They were flown to the Texas rescue by volunteer pilots. The rescue named the dad dog Duff n Stuff.

Soon after arriving, Duff n Stuff found his forever home. The puppies are a bit too young to be adopted, but they will be up for adoption soon.

Hennings, who is based in Texas, rescues dogs in the direst of situations.

“It’s so pathetic how many animals there are in Texas and absolutely no one does anything. It’s put down on organizations to fix this when it’s the responsibility of the state. Disgusting,” she wrote on her Facebook page.

Henning’s page is filled with posts about shelters being at capacity.

“Back in the day when it was all oil field, you saw dogs everywhere but as time progressed, we started spaying and neutering and seeing responsible pet ownership,” Melanie Gambrell, All Creatures Sanctuary and Rescue Owner told NewsWest9 in june 2021. “But here in the past 2-3 years, it’s exploded.”

Gambrell reported that dogs were roaming around all across Basin, Texas.

“We have owners who are surrendering their 16, 17-year-old dogs to the shelter, we have had dog attacks, packs of dogs,” Gambrell said. “It’s getting to be out of control.”

She said local animal shelters need all the help they can get.

“They’re not the ones out here breeding the dogs, letting them run the streets, they have a difficult job,” Gambrell said. “They need the community’s support to fix their fences, to spay or neuter their animals, if they see an animal, hold until its owners are found.”

Many say that spaying and neutering animals will relieve the issue.

“We need to make a low-cost spay and neuter clinic for our community to have access to because it is very expensive to have a dog taken care of,” Khristy McMahan, Happy Day Humane Society Dog Trainer, said.

We’re so glad Duff n Stuff and his adopted puppies are safe! Check out a video of another one of White Rock Dog Rescue’s sweet rescue dogs below.