A feral kitten turned into an attention seeker after she was given a taste of indoor life. 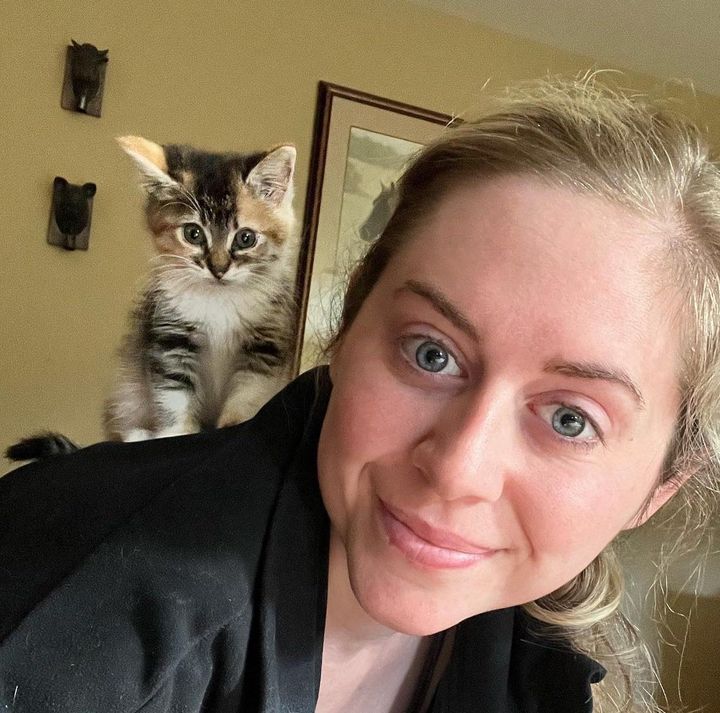 Potato the kitten came to Ashley’s Kitten Academy, a cat rescue in Washington, as a very timid cat. She was born outside, raised by a feral cat (who was later spayed and vetted), and desperately needed socialization.

She was so scared that she cowered in the pen, huddled in a corner. After having spent the first few weeks of her life without human contact, Potato had picked up some feral characteristics from her mother.

She was treated for an upper respiratory infection and given a much-needed bath to remove flea dirt covering her coat. 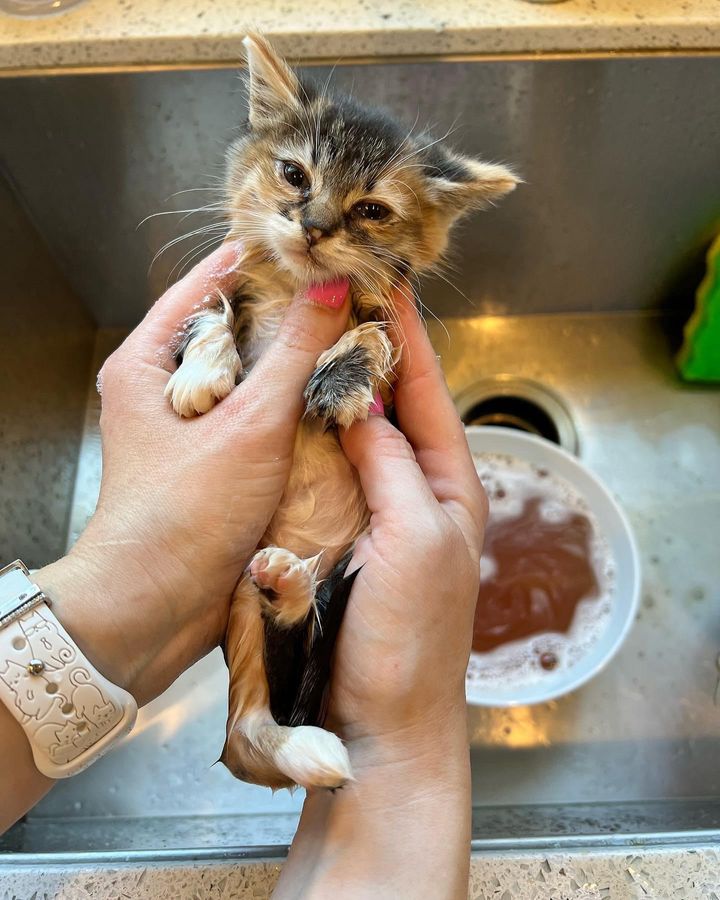 Despite being terrified, Potato couldn’t resist being wrapped up in a towel after a thorough cleaning. The swaddling calmed her down, and for the first time, she got to experience being cuddled.

Ashley Morrison, the founder of Ashley’s Kitten Academy, created a calming, quiet, and comfortable environment for Potato to decompress. Within a day, “Potato was asking for human interaction,” Ashley shared with Love Meow. 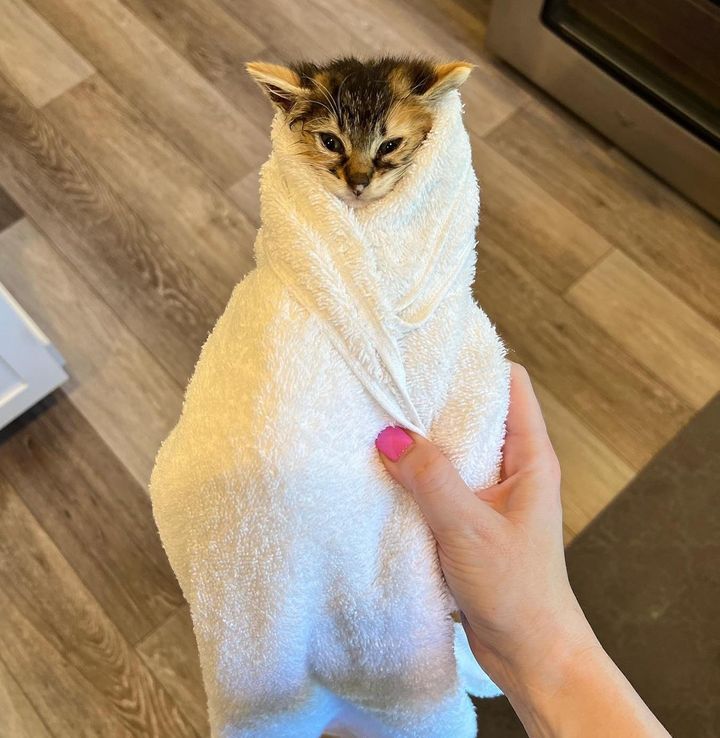 She felt so much better after getting all cleaned upAshley Morrison

When the kitten had her first success with a litter box, everyone cheered and celebrated. Knowing that she no longer had to fend for herself, Potato began to revel in her new life.

When Blossom, a resident cat, visited the new kitten on the block, Potato didn’t hesitate to show her who was in charge by acting big and scary. Blossom saw right through it and accepted the tiny sassy ball of fur. 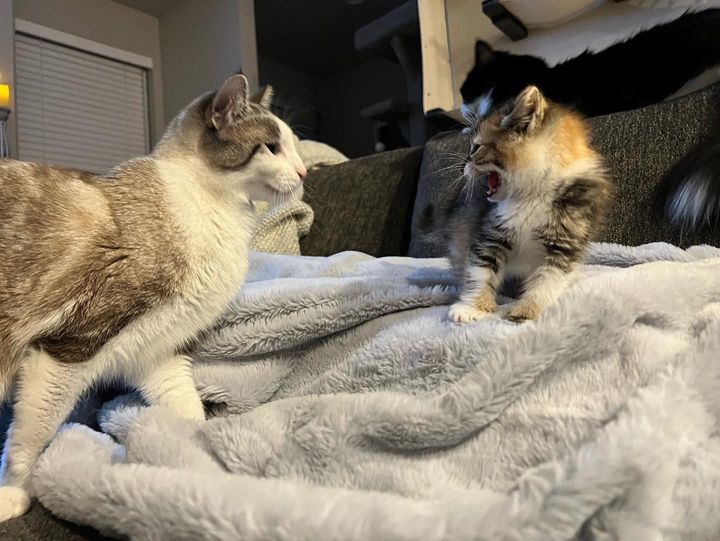 Potato adjusted nicely to the luxury life of an indoor cat. When she came across Thelma and Bonnie, two foster kittens, she insisted on being their friend.

“She kept trying to play with them through her little pen. I let her out and she had the best day. New playmates made her so happy.” 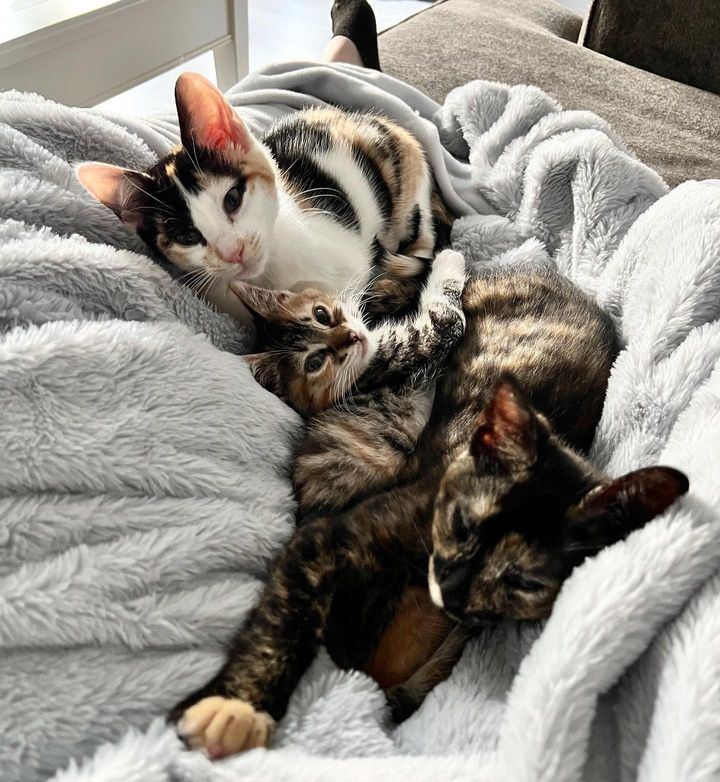 With encouragement from her foster family and feline friends, Potato was learning her confidence in open spaces and taking steps to explore the world around her.

She started by getting major zoomies on the couch and gradually worked her way out into the rest of the room. 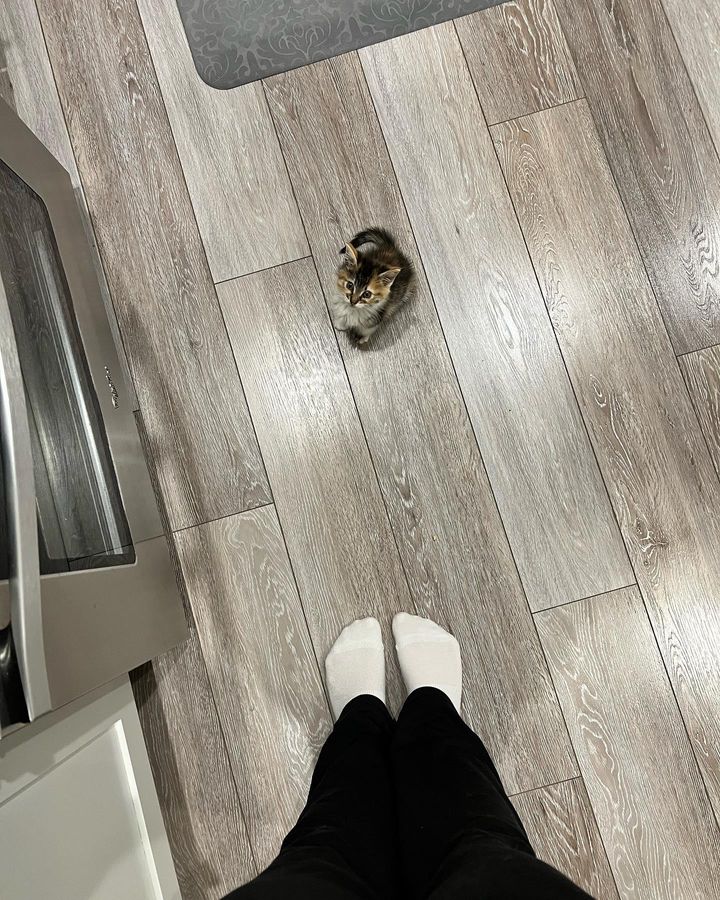 She is the size of a potatoAshley Morrison

“She’s sought out my attention now, and is no longer only hiding under her bed afraid of people. She runs full speed through rooms, hopping like a little bunny.” 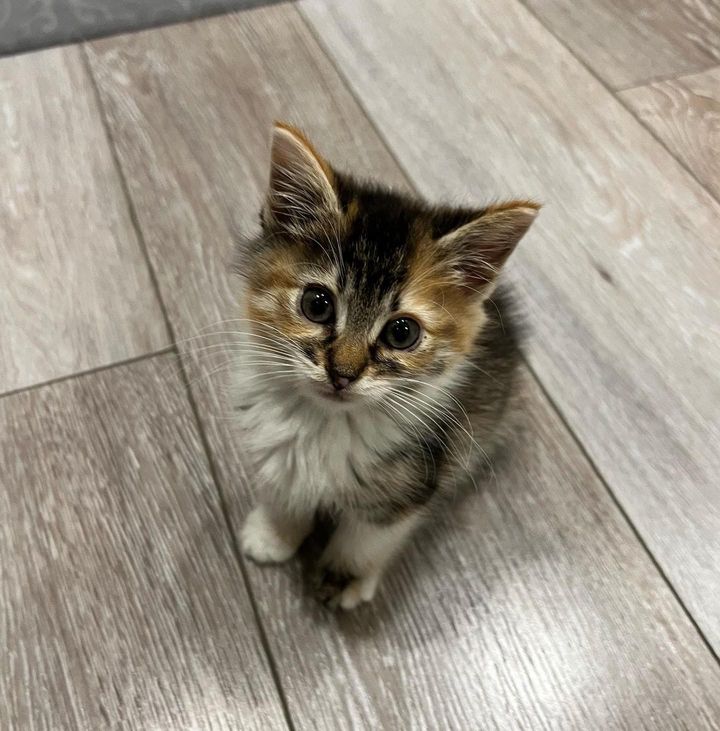 Potato will come sprinting when Ashley calls her name. She enjoys snuggling on a soft blanket or nestling comfortably on a warm lap, and she doesn’t mind sharing with friends. 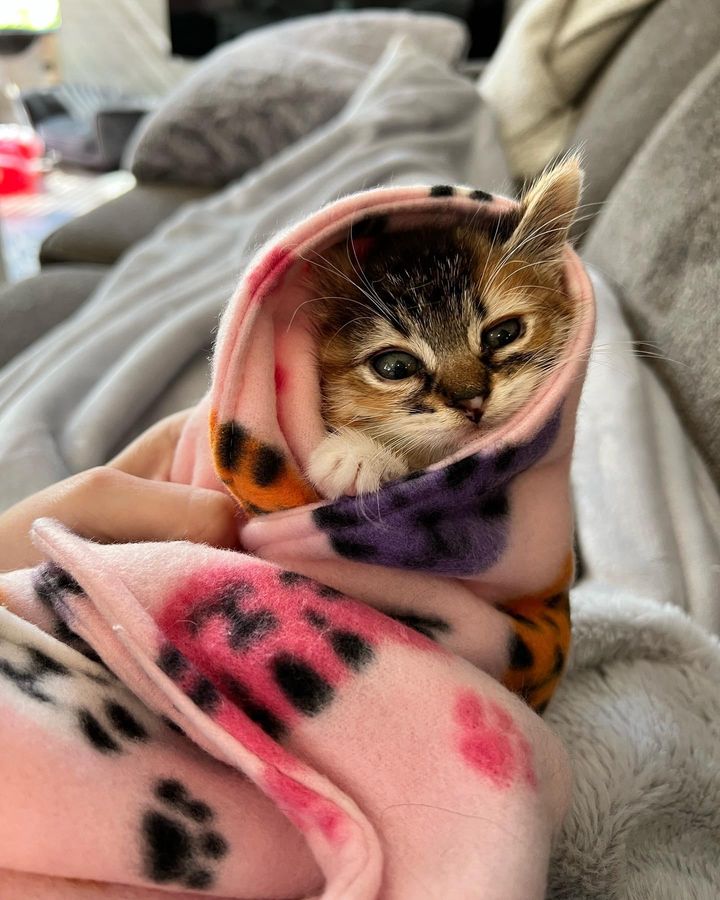 After recovering from some health issues, Potato felt more energized and snugglier than ever. She discovered Ashley’s sleeping arrangements (her bed), and decided to join her. 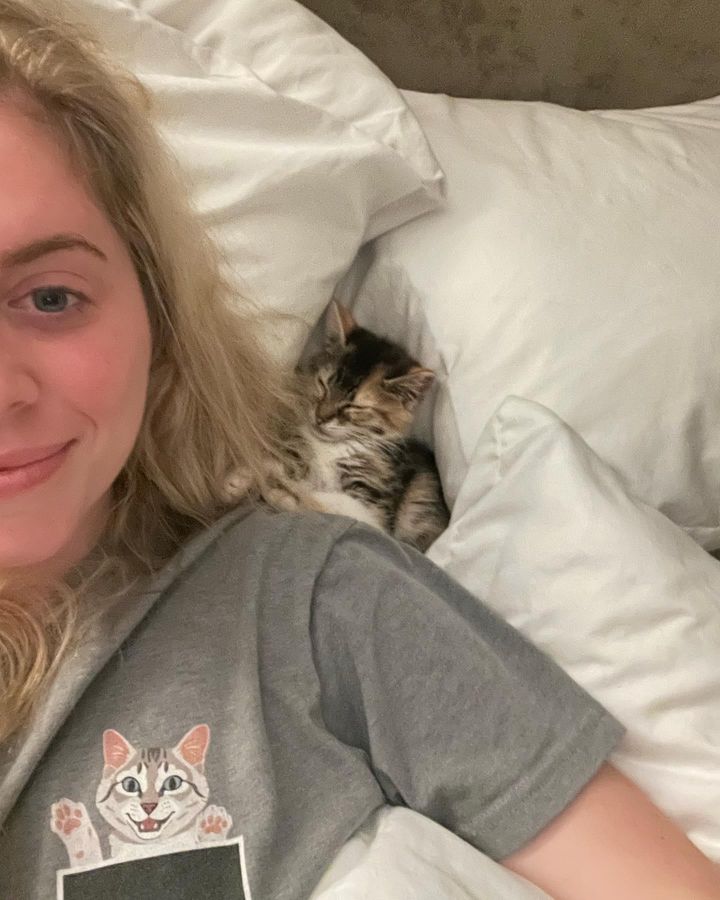 “She slept all night under my chin, on top of my head or next to my hand. When we finally got up in the morning, she came down for breakfast and to use the litter box, but then I couldn’t find her,” Ashley wrote.

“She was back in bed. Needless to say, she will get to sleep next to me now at night.” 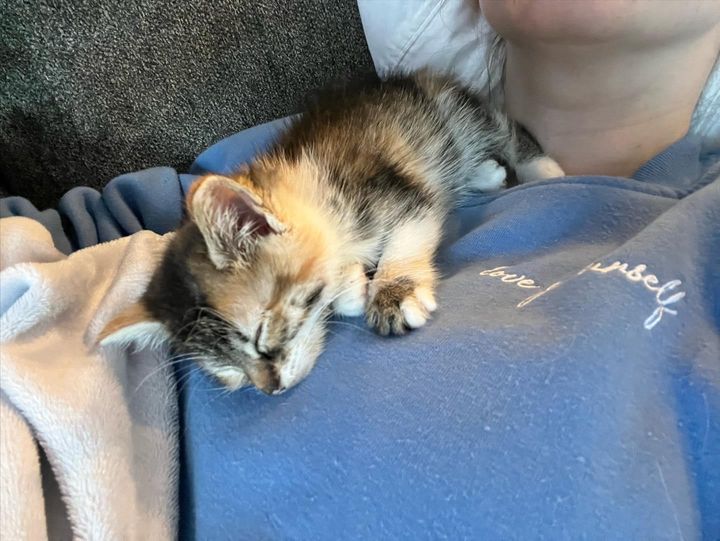 Potato is making good gains and has surpassed the one-pound mark compared to the 14 ounces upon arrival.

When she is not tearing through the room with her buddies, she is likely lounging by the window sunbathing, living the good life. 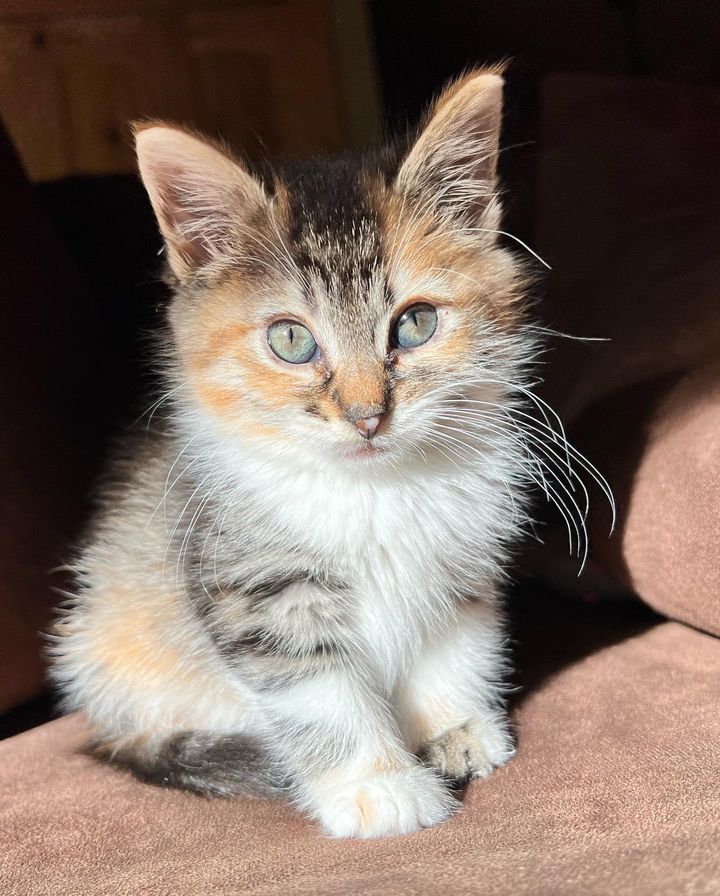