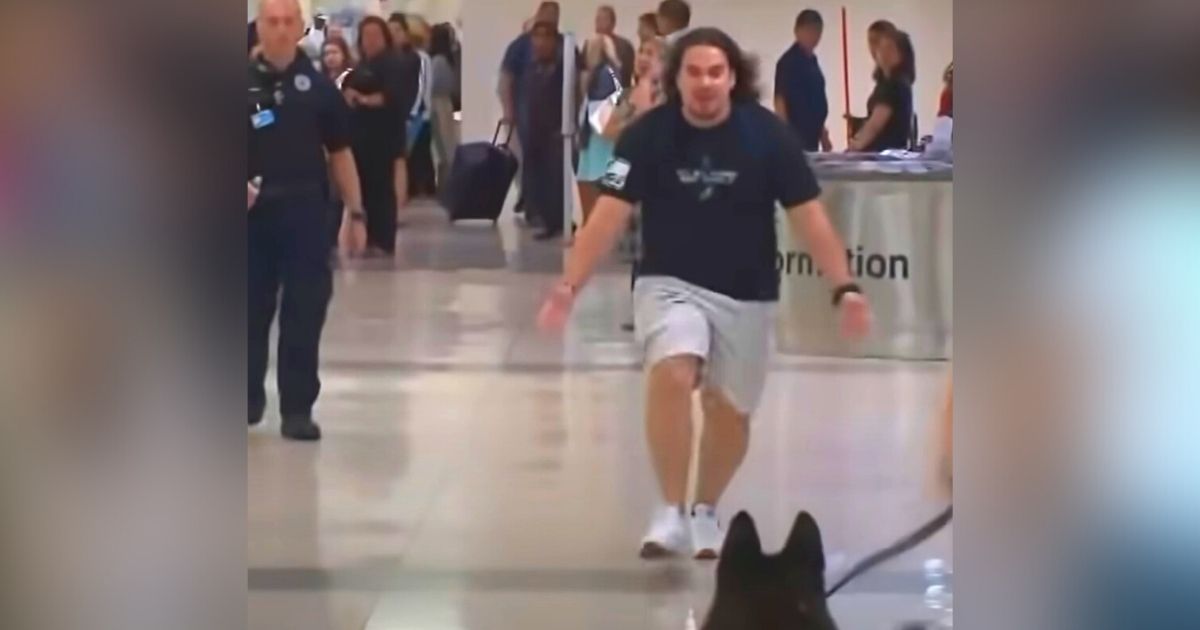 Some bonds are so deep that neither distance nor time can ever diminish them.

This is one of them.

A marine and a retired K9 service dog have shown that absence can only make the heart grow fonder.

The people at Midway Airport witnessed the emotional reunion between man and beast.

After spending 3 years working together, looking out for each other, and taking care of each other, it’s safe to say they were quite attached.

Their reunion video is touching.

“I got stuck with him in 2014, I brought him from Lackland, he was a combat tracker. And we were together for 3 years. I got out and haven’t seen him since.”

As with any other dog owner, Varela and Atilla formed a lasting bond, only theirs was forged from danger and a sense of duty.

They were inseparable while in service.

He explained their dynamics to CBS:

But their duties would eventually take them away from each other. After 2017, they never saw each other again.

After all, both of them are just serving under orders, no matter where these orders take them.

So when the news reached Sgt. Varela about Atilla’s retirement, he took the opportunity to be reunited with his best buddy.

With the help of Mission K-9 rescue, the retired marine worked on getting his best friend to live with him for good.

Kristen Maurer of Mission K-9 rescue explained to CBS the kind of bond that these partners have:

“These dogs serve with these guys, they spend 24/7 training with them, putting their lives on the line together, so there’s a bond that we can’t understand.”

Hopeful that his buddy will still recognize him, Sgt. Varela waited as Southwest Airlines Flight 7 from Houston landed at Midway.

His hope was fulfilled.

A high-pitched “Come here! Come here!” echoed through the hall as the retired marine ran towards his best friend with arms wide open.

Tail wagging, and with excited tippy-tapping, Atilla runs to his former handler, finally having a person he can call family and a place he can call home.

Varela felt reassured about the reunion, sharing with CBS:

“The way he reacted, the way he jumped, he knows who I am, so that’s good.”

As Varela works on earning a college degree, he said to CBS that Atilla is currently enjoying a well-earned retirement.

It’s not rare, but it’s beautiful.

Sgt. Varela isn’t the only lucky soldier who got reunited with his best buddy.

Sgt. Angela Cardone finally adopted Bogi, a dog she worked with for over a year, before she got reassigned to another base.

She and Bogi worked together when Sgt. Cardone was assigned to Japan. After she got transferred to Hawaii, she knew she had to give Bogi a forever home.

Partners even after service

When Bogi was forced to retire due to a neck injury, Sgt. Cardone reached out to American Humane to help her adopt her best friend.

The both of them had their reunion in Hawaii and Sgt. Cardone is beyond thrilled to give her puppy a retirement full of love and comfort.

See Varela’s heartwarming reunion with Atilla in the video below!

In a rare public appearance with his girlfriend Alexandra Grant, Keanu Reeves appears positively radiant.
Actor Keanu Reeves has long been considered to be a
0 168