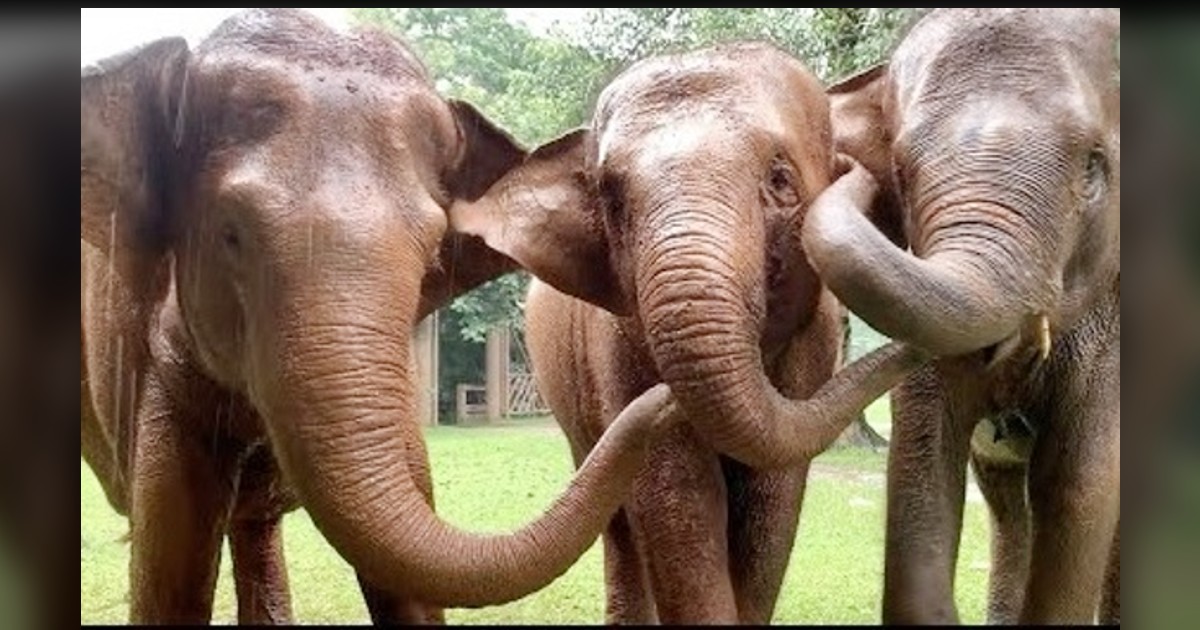 Though Chana and Sai Thong were half-sisters, they were also best friends. The two elephants grew up together and get along super well.

They would go everywhere together with their original owners, including selling bananas and sugar cane wherever elephants were allowed to enter, according to Elephant News.

But one fateful day an event occurred that would eventually pull these sisters apart.

So, Saengduean Lek Chailert, founder of the Save the Elephant Foundation in Thailand, brought a team of veterinarians to help treat Chana for about four to five months.

Unfortunately, Chana needed some extra care. So, she was sent to the Elephant Nature Park to heal.

This meant that Chana and her sister Sai Thong would be split up.

The two sisters spent years apart but their bond remained strong. According to The Ecologist, elephants benefit from having an older sister.

“Sibling relationships shape individual lives, particularly in social species, such as the elephants, where cooperative behaviors are essential to the development, survival and reproductive potential of individuals,” Dr. Vérane Berger at the University of Turku, wrote as the main author in a study by the British Ecological Society’s Journal of Animal Ecology.

The study of semi-captive Asian elephants in Myanmar found that older sisters have a bigger impact on female calves than older brothers do.

Older siblings help to increase a calve’s long-term survival when compared to calves without siblings.

But female calves with older sisters were found to have higher long-term survival rates and reproduced for the first time two years earlier than those with older brothers.

It’s likely that elephants will have more offspring over the course of their life when they start reproducing at an earlier age.

“By collecting more information on the body mass of mothers at birth, we hope to disentangle maternal effects from sibling effects. More data will also let us explore the effects of the environment on sibling relationships and go into more detail on the effects siblings have on specific aspects of a younger calf’s health, such as immunity, muscular function, and hormonal variations,” Berger wrote.

Thankfully, Chana and Sai Thong got to eventually resume all the benefits of their sisterly relationship.

After her time at Elephant Nature Park, Chana was reunited with her sister.

The reunion was caught on video and showed that these two elephants never forgot each other. You could hear the elephants making sweet little elephant squeaks at one another showing their joy of being reunited.

Chana and Sai Thong stayed real close to each other and nuzzled each other with their trunks.

The video was so heartwarming that it ended up being viewed more than 160,000 times.

“Those adorable little squeaks are elephant laughter. They are so, so happy to see each other. It is adorable the way they keep touching each other. It also proves what an incredible memory elephants have and that they never forget. Elephants are truly amazing,” one YouTube commenter wrote.