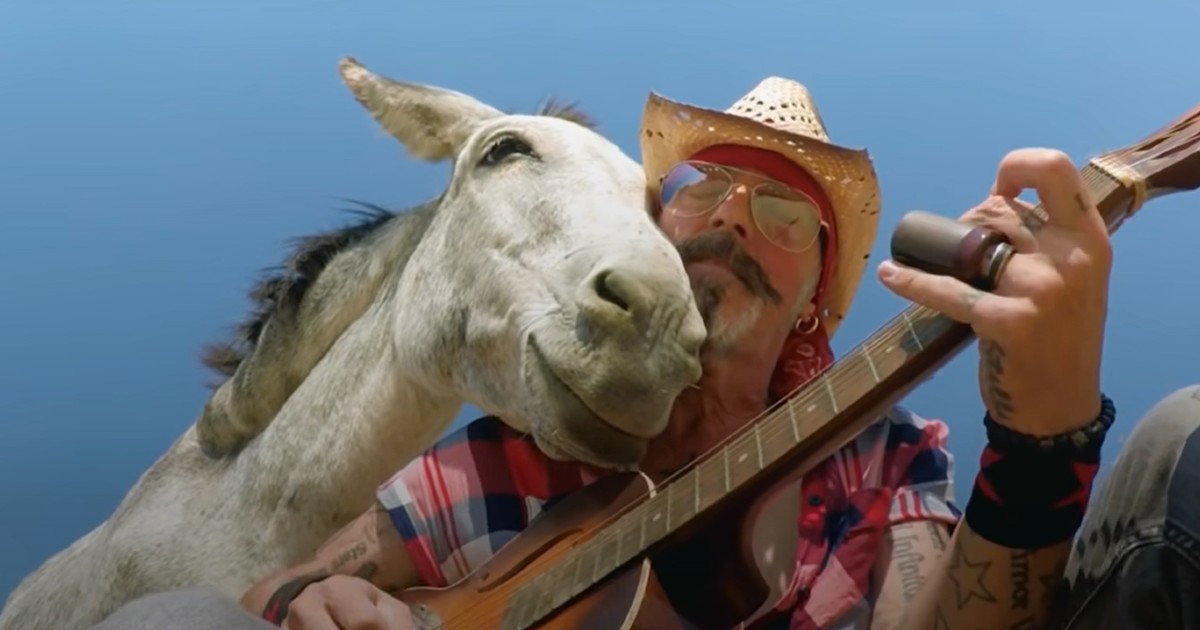 Hazel is a donkey who loves to cuddle with her human.

In this heartwarming video by The Dodo, watch a guitar-strumming man and this affectionate donkey, Hazel.

Hazel is one of a kind.

The man is rocking out while playing his guitar when Hazel shows up. She’s seen enjoying the music and snuggling up to her human’s shoulder.

It’s as if they’re both in their own world together—and it makes for an adorable scene!

Donkeys are highly intelligent and sensitive animals. They are also sociable and enjoy spending time with one another.

In fact, they love being around other donkeys so much that they can form strong bonds with them. They can get along with humans, too—they make great pets.

If you’re lucky enough to meet a special donkey who likes spending time alone with you, it will remember this behavior for years to come!

Whenever Chris, her human, starts playing guitar, she will come over and nuzzle his head into his shoulder.

Donkeys love music, so it makes sense that Hazel loves it every time Chris strums those strings.

“The first time I played for her, I was truly surprised by her reaction,” Chris recalled of the precious moment. “I’m like, ‘She’s kind of just snuggling up to me’ but no. Rhea, who owns the sanctuary, said, ‘She’s just your girl.’”

Hazel would cry every time he leaves.

For some reason, Hazel decided Chris to be his human. Every time it was time for Chris to leave the sanctuary, Hazel would cry in devastation.

It’s like watching the love of her life drive away.

For this reason, Chris grew to adore the adorable donkey and always found himself visiting her for some bonding time and guitar sessions.

They have been soulmates since 2001.

When he first visited the pen with 15 donkeys, Hazel just instantly gravitated towards her.

It was as if she knew from the very beginning he was going to be his precious human. Animals are amazing like that.

“I was all hers, and no one else was going to get near hear, and she was jealous from the very first day that I played for her,” he shared.

Even Hazel’s best friend is no exception!

Lily, Hazel’s best buddy, couldn’t even get close to Chris when he starts playing the guitar because Hazel just wouldn’t allow it. What Hazel wants, Hazel gets!

“I just feel like one of the most special things about Hazel is the fact that she’s so loving,” Chris remarked. “It really makes you feel so good when you’re with her.”

Chris may have not chosen Hazel initially, but we now know for sure he has now chosen to stay by her side for life—until they are old and grey!

Parents of 12 working multiple jobs to support their family get Christmas miracle from stranger
What do you want to get from your Secret Santa?
0 864