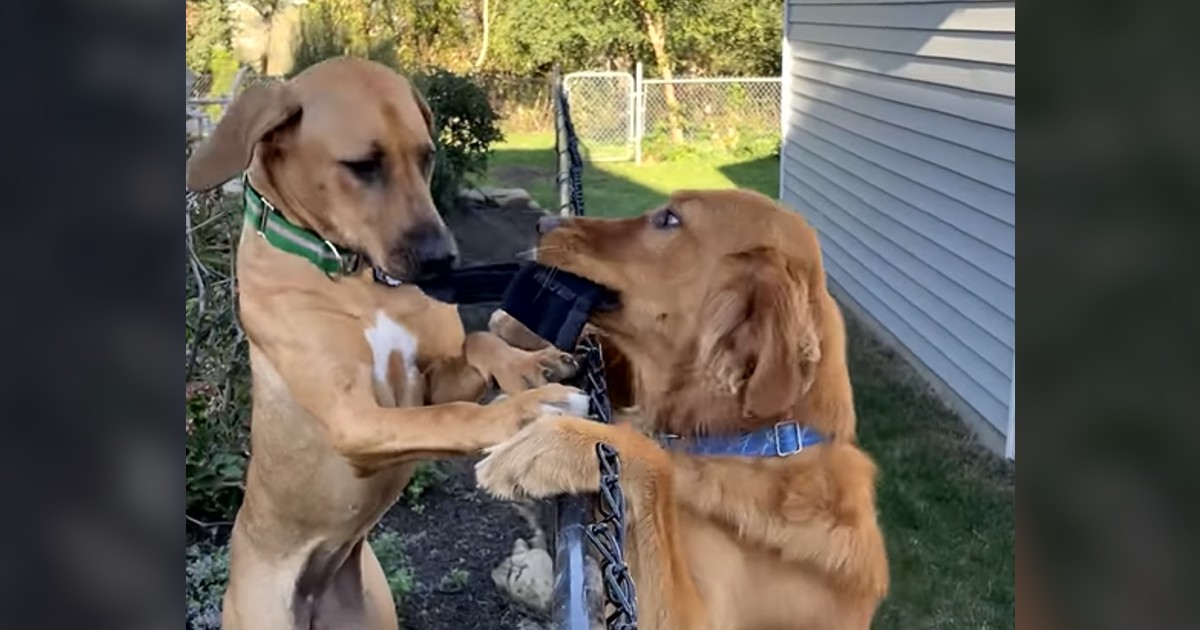 Despite being separated by a fence, there was nothing that could tear Pax and Penny apart.

These two were in love and there was nothing that could get in the way of that.

So, the two would sneak smooches while jumping up against the fence until one day their parents united them for a real date.

“We started noticing Pax was going straight outside to the fences everyday and we realized that he was looking for our neighbor’s dog,” Pax’s mom Emily told The Dodo.

Every time Emily would open her door, Pax would shoot out and run as fast as he could to go to the fence and just stare at the neighbor’s back door until they let Penny out to play.

“We got pictures from our neighbor of him just standing paws up on the fence looking in their yard like, ‘Where is she?’” Emily said.

When the neighborhood was hit with a snow storm, the two doggos were separated for like a week.

You see, Penny is NOT a big fan of the snow. But Pax is a great motivator for her and she decided to brave the snow just to see her man.

“Once she got past the point where like, ‘OK, the snow isn’t so bad’ and she saw Pax and she like took off,” Emily said. “We always say they were kissing because they lick each others faces so it became an everyday activity.”

Eventually, it was unusual for the two dogs not to see each other every day.

They even started sharing toys across the fence.

“We’ve even lost one of my husband’s socks to Penny’s yard because Pax is always stealing his socks,” Emily said.

Emily and her neighbor realized that their dogs got along so well that they felt like they couldn’t keep them apart.

So, one day they decided to open the fence and let the two play in the yard.

Pax immediately ran into Penny’s yard and the two just ran side-by-side around the yard at top speed. You could tell how overjoyed they were to finally be together.

Pax and Penny now spend a lot of time together.

They even have indoor playdates where they get to hang on the couch and cuddle and play with toys.

“They just get along really well so it’s really sweet to watch,” Emily said. “They’ve developed a really sweet friendship and we could say that they’re boyfriend and girlfriend.”

Unfortunately, according to Pax’s Instagram page, Pax moved and he and Penny now live about a half hour away.

But their reunion after being away for a few weeks was very sweet.

Emily says there are a lot of playdates scheduled in their future. Sometimes Pax will even wear his fancy bowties when they meet. Some of Pax and Penny’s fans even say that they are soulmates.

What do you think? Check out the video below to find out.