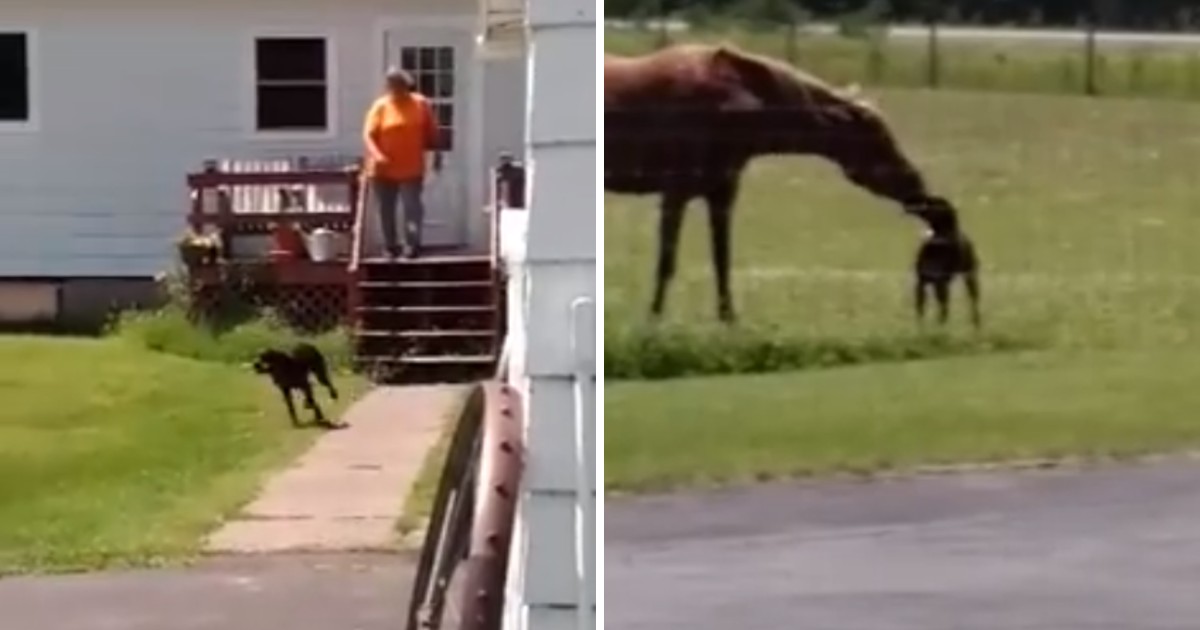 The more we read about dogs doing amazing, thoughtful, or unique things, the more we begin to question: is there truly anything that dogs can’t do? Not only are dogs smart enough to learn tricks pretty quickly, but they’re also incredibly friendly and compassionate toward others. In fact, we’d go as far as saying that dogs are a lot more compassionate than some humans, even.

So when we stumbled across a video of a dog bringing a special treat over to his horse pal, it just helped to confirm our theory about dogs really being able to do just about anything.

The caring pup not only knows that a horse’s favorite treat is a carrot, but he actually goes out of his way to deliver the carrot right to the horse’s mouth, so to speak.

Tina LeVoir-Jones was visiting a friend’s farm when she came across her friend’s pup’s clever trick. Whenever it was time for the horse to have a snack, the dog would jump straight into action. Tina shared the video onto Facebook and it had soon racked up an impressive 1k shares, as well as hundreds of likes and comments.

“This is great! Watch closely. My friend has her dog bring a carrot out to her horse,” Tina said in a caption to her video.

At the beginning of the video, the dog emerges from the house with something in his mouth.

It’s the carrot, and he’s on a mission to carry out an important job. The clever pup knows exactly where he needs to go, and he breaks into a run in the direction of the field, running through the stables and out towards his horse friend.

You’d expect most dogs to be scared of horses – but not this one! The pooch and the horse are clearly good friends, as neither seems nervous around each other as the dog approaches. In fact, the horse is so calm and collected that she casually scratches at her back as her little friend gets nearer.

When the dog reaches the horse, he waits patiently for her to finish scratching her back before nudging the carrot in front of her face, as if to say, “look what I’ve got for you!”

The horse then graciously takes her snack and eats is all up – whilst the dog, whose job is done, obediently runs back to his owner. What a clever dog!

“Good boy!” The clever pup’s owner shouts to him.

People took to the comments to share their love for the video, with one user saying:

“Made my day 🎂 Such a sweet friendship,”

“The dog made sure his friend had a snack!”

This is definitely one of the coolest tricks that we’ve seen a dog do, as well as it being a super thoughtful and caring act. Do you know a dog that can do any special tricks? Let us know in the comments!