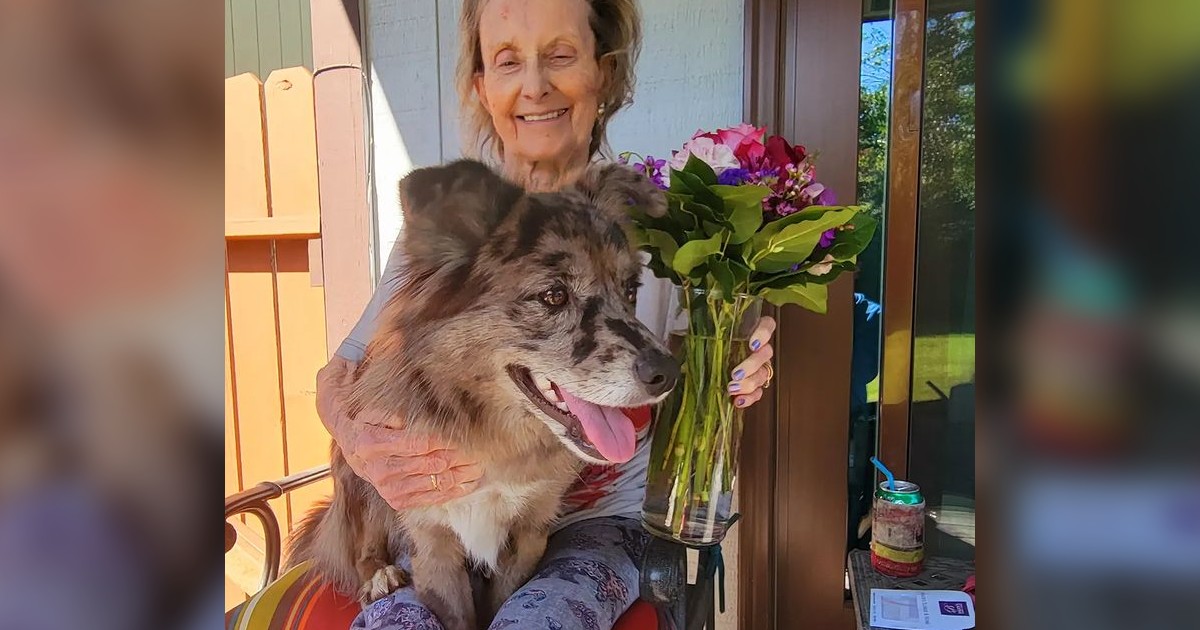 What a sweet pup.

In the early morning and late evenings, Jade serves as a loyal dog to her owner Heath.

But in between that time, the 35-pound Australian Shephered and Shiba Inu mix lives a double life.

The 1.5-year-old dog has become an emotional support dog of sorts.

Jade was used to being by Heath’s side ever since she was about 8-weeks-old.

But that changed after Heath’s girlfriend saw someone who could use the loving companionship of a dog.

“My girlfriend manages a home health care place. For as long as I’ve known her, she has been visiting a client that she’s grown fond of and cooks her breakfast and dinner. Sometime within the past year, this old woman’s dog died on the anniversary of her husband’s death. It obviously wrecked her,” Heath wrote on Reddit.

So, Heath offered to let Jade visit the client’s house to cheer her up.

The woman immediately fell in love with Jade.

And apparently, the feeling is mutual, as Jade loves spending time with Mrs. Riddle.

“Jade has gone both morning and night every day since. Apparently Jade recognizes that she’s old and fragile and is deliberately gentle. She and Jade eat breakfast and dinner together. She bought Jade what sounds like a mountain of toys. When we say, ‘Jade, wanna go to Mrs. Riddle’s house?’ she jumps and squeals and zoomies about,” Heath wrote.

He’s just overjoyed to see that Jade has brought so much joy to someone else’s life.

Especially when she would have otherwise spent her time alone at home waiting for Heath to get back from work.

“The client said something to the effect of her life has meaning again,” Heath said. “My sweetheart spends so much time away from me, essentially being a therapy dog for someone I do not know, and I find that awesome.”

Heath decided to share his story about Jade on Reddit in hopes to spread some joy to others.

Plus, he just likes talking about her as much as he can.

“Jade is a sweetheart, but she’s also very protective of me and those that she perceives as part of our pack. She’s very cuddly. She’s nestled into my side as I’m writing this,” Heath told Bored Panda.

“She loves to play fetch. I got her about 60 racquetballs for her first birthday and gave them all to her at once. She went bonkers for all the balls as they bounced around!”

Almost 100 people commented on Heath’s Reddit post to talk about how touched they were by his story.

“I love this so much, and its awesome that you guys are sharing the joy that Jade brings to you with someone who sounds like they really needed it. Dogs seem to know what people need sometimes, and it sounds like Jade realized that Mrs. Riddle could use some extra love and happiness! Give Jade some scritches for me and tell her she’s 1000% in the good girl club!” wrote one commenter.

In a rare public appearance with his girlfriend Alexandra Grant, Keanu Reeves appears positively radiant.
Actor Keanu Reeves has long been considered to be a
0 93