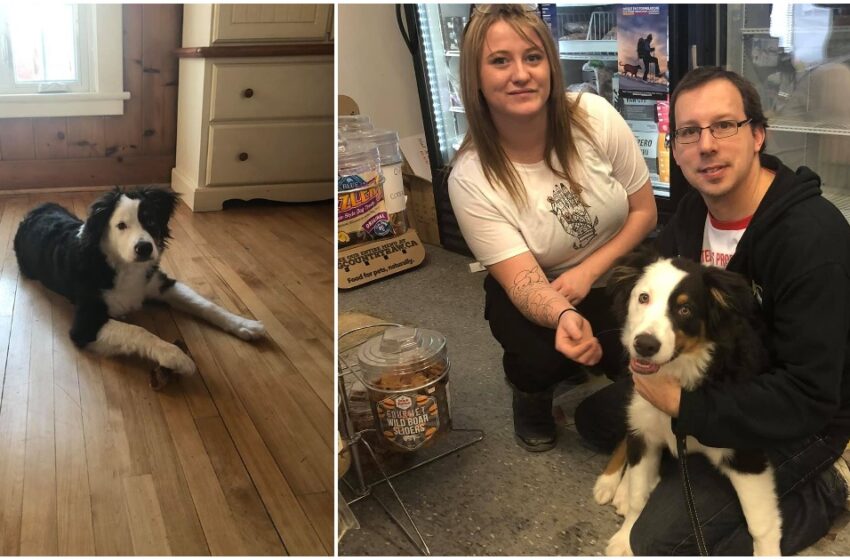 Unless you’re Dr. Dolittle, you can’t speak with animals, but they definitely know how to communicate. An adorable five-month-old Australian shepherd who listens to the name Vango did exactly that and rescued himself from the hands of dognappers. The smart pooch walked in a store with his dognappers, and the four-footer cleverly alerted the store owners that something wasn’t right.

It all happened at an animal store in Gatineau, Quebec, Canada. Vango kept constantly barking and demanding the store owner’s attention.

Yves Jodoin works as a staff member at the store and is also a dog trainer at Au Royaume des Animaux. He definitely knows a thing or two about the behavior of dogs and was quickly able to figure out that the whole situation was very off.

At first, Yves simply though that the four-footer was hungry and was barking because he was hoping for a treat. When Vango kept on barking even after he received a cookie, Yves started to get more and more suspicious.

“The dog was barking, the dog was poking and he really wanted my attention,” employee and dog trainer Yves Jodoin said to CBC Canada. “I was giving the dog cookies, but the dog was still barking.”

When the couple who came into the store with Vance couldn’t even answer basic questions about the dog, the staff member started to put things together.

Suspicions began to arise, and as Yves started to ask more and more basic questions about the dog, it only got worse. The couple didn’t even know how old he was, whether he was sterilized or not, what kind of food he usually liked or where he came from and how much they paid for him.

“They were evading the questions,” the man recalls.

Luckily, another staff member, Lydia Blouin, also noticed that something was off. Lydia checked local social media pages, to see if there was anything about missing pets. It didn’t take long before they found Vango’s picture online, as he was reported missing. The dog was apparently last seen at home in Buckingham, only a couple of hours before he arrived at the store.

Yves then had a sudden realization – he already knew Vango because he trained him when he was still a puppy!

“At that point I said, ‘Vango, come!’ And the dog was reacting, he was jumping,” the dog trainer. “All along he was barking and poking, trying to say, ‘Hello, I’m not the dog they say I am.’”

The couple had no other choice but to confess that it wasn’t their dog. They claimed that they found Vango in the woods, and wanted to keep him as their own support animal because the woman couldn’t afford a dog and was in poor health. The woman in question was of course, busted, and Yves managed to convince her to leave the animal at the store.

Vango’s real owner was completely in shock, as she knew that her pooch wouldn’t just run away on his own. One moment, Vango was in the fenced yard, and the next moment, he was just gone.

“Is it possible that someone took him? And I was thinking, ‘Who could do that? It’s impossible!”

The phone call from Yves was a complete relief.

“I can’t talk about it without crying,” she said. “Imagine, If those people didn’t go to that pet store, I would have lost my dog forever.”

Vango wasn’t microchipped, but Josée already made an appointment to get it done and prevent things like this in the future.

As for the dognappers, she filed an official complaint at the local police department.

“I don’t want to cause them problems. We don’t know why they did it. But at the same time, they took my baby,” the owner. “I want to discourage others from doing this.”

Thanks to Vango’s clever behavior, he is now in the hands of his loving owner again. What a smart pooch!