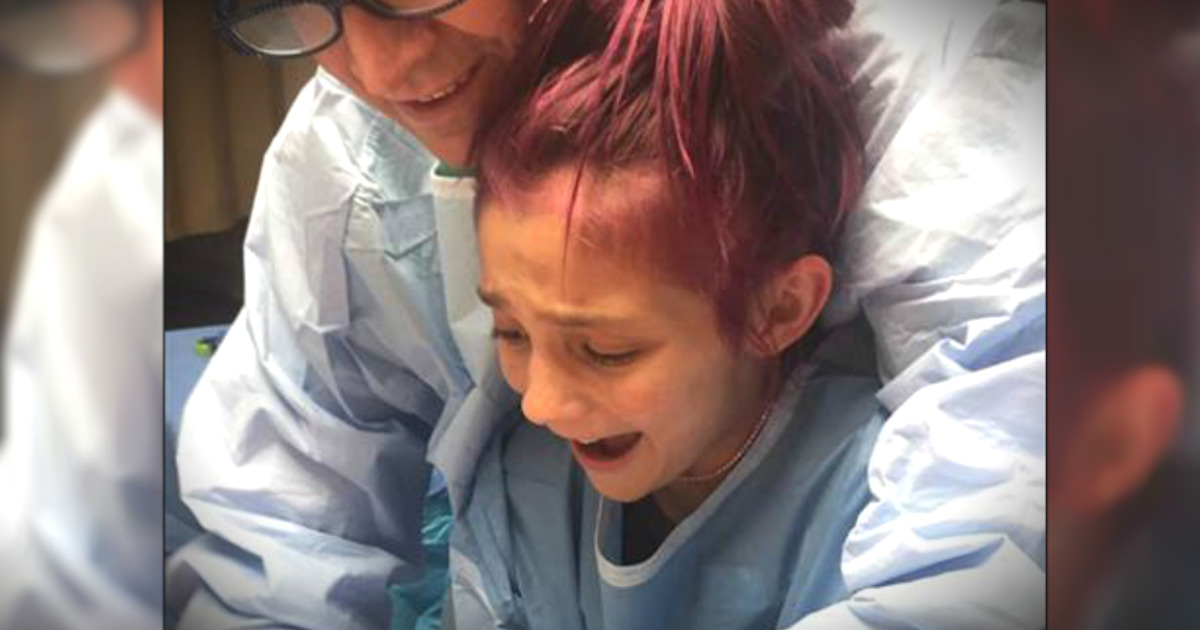 A baby’s birth brings about pain then joy, followed by instantaneous love at first sight. Babies are squishy and cuddly with that delicious new baby scent.

The birthing process, whether it’s natural, with the help of medication or via a cesarean section, can be a bit squeamish for some and incredibly beautiful for others.

Sometimes parents have siblings of the new baby wait outside the delivery room while Mom pushes, or maybe even stay home with a relative. Those who choose home births usually have their children present for most if not all of the birthing process.

When Jacee Dellapena was 12, she was thrilled when her mom Dede Carraway and her stepdad Zach shared with her that they were expecting. She observed her mom throughout the pregnancy, noticing how her tummy swelled and she craved certain foods.

When it came time to deliver the baby, Jacee hoped to be allowed to go to the hospital with her mom and stepdad. But she ended up getting to do so much more…

Dede decided that since her daughter had already learned about the birthing process during health class at school, she would allow her to be present for the birth of her baby brother. The Mississippi girl could not wait to become a big sister and knew she’d be like a second mom to the little boy, her second younger brother.

But the obstetrician noticed how intrigued Jacee was during her mom’s labor and delivery. The doctor also realized that Jacee couldn’t see much of what was happening at her height, considering the table had been elevated for delivery.

Much to the tween’s surprise, the doctor suggested Jacee suit up and help out!

“I started crying because I was too short to see anything. The doctor was like, ‘Just go ahead and get some gear on and come help me deliver the baby.’ I was like, are you kidding me? Are you being real?”

The middle schooler slipped on scrubs, wriggled into some oversized adult surgical gloves and braced herself for what was about to become the most amazing moment of her young life.

Mom Dede was stunned that the obstetrician was allowing her daughter to watch her give birth.

“I couldn’t believe it. I was like, what? Uh, no. Never in a million years. But the doctor said, ‘I’m being serious. I’ll guide her hands and everything.’ So she got up in there and was suddenly in the middle of everything.”

Jacee focused on the baby’s arrival, catching this precious gift without dropping him, then had the chance to cut his umbilical cord. She had wanted to be in the delivery room for her other brother Zayden’s birth 18 months before, but Dede didn’t think she was old enough for the experience.

This time, though, Dede felt more comfortable with her daughter participating to this extent.

Jacee reassured everyone that she had no concerns with anything she saw or experienced. But she was a bit anxious out of fear of making a costly mistake.

“I was a nervous wreck. I was nervous and shocked at the same time. I was scared I was going to mess up or do something wrong because there are plenty of things you can do wrong.”

Zach, Jacee’s stepdad, captured his stepdaughter’s incredible expressions on camera. He willingly stayed in the shadows so that Jacee could immerse herself in this experience.

“He gave up a lot of his special bonding time with the baby and gave it to Jacee.”

The tween was beyond grateful for what she was allowed to do in the delivery room and now has her own special bond with her little brother.

“I couldn’t believe it. It was like, oh my goodness, I just delivered a baby, and it’s my baby brother, and I’m going to tell him when he gets older that I delivered him. I can’t wait.”

Of course, there have been a fair amount of people opposed to what Jacee observed and they had no problem sharing their opinions on a Facebook post by Nikki Smith, but others noted that it’s “none of their business.”

“I am so glad Jacee is being seen all over the world! Although some of you may not agree with her helping deliver her baby brother, this beautiful moment will always be remembered by both her mother and herself. If you don’t like the post just keep scrolling, no need to comment and speak negative. Birth is a natural process and there is absolutely nothing wrong with allowing her daughter to witness this beautiful moment. It’s not for everyone but Jacee was a rockstar and helped deliver a newborn! I don’t know about you but I wouldn’t have when I was 12!”

Tina Davies admitted that she was taken aback at first when she read about Jacee.

“Not gonna lie. At first I was shocked and a bit odd about it. But I looked at the photos and that’s just my conditioning that made me feel that way. Only since the invention of hospitals has this become socially unacceptable. It’s not nature’s fault. It’s ours. Kudos to Mom and Jaycee. Pictures made me tear up.”

Watch Jacee’s expressions in the photos and see what you think!