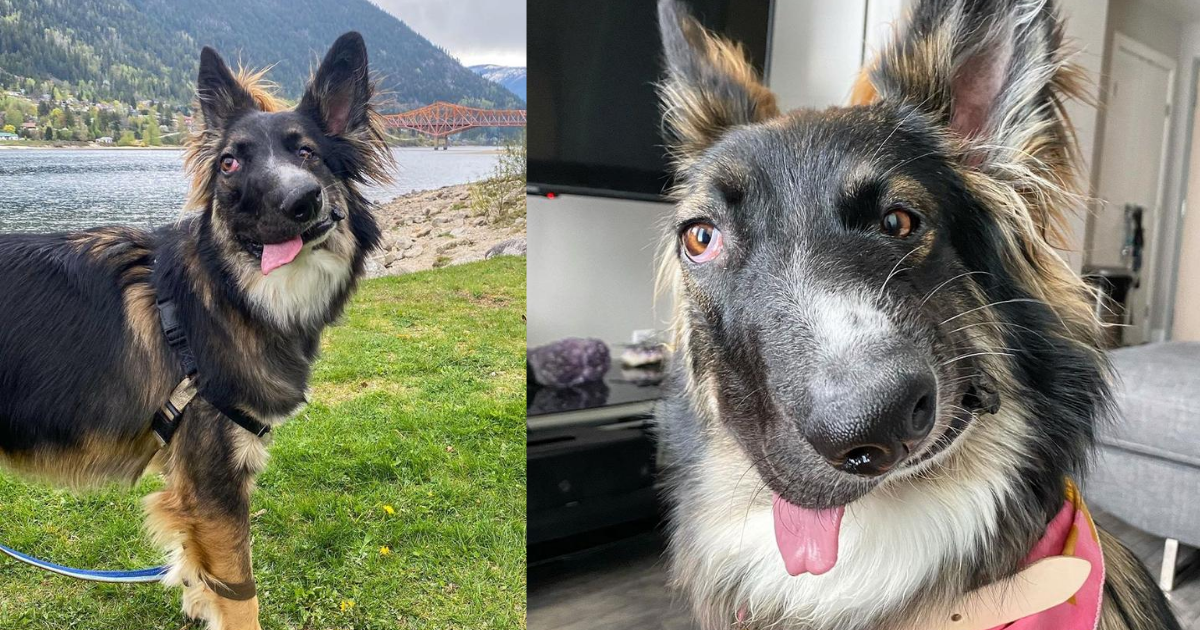 Just like humans, animals aren’t exempt from disabilities and disfigurements, but their unique traits just make us love them all the more. For one dog from Canada, his disfigurements don’t stop him from being loved at all, and he is still thriving in life – so much so that his owners are even training him up to be a therapy dog!

Brodie the German Shepherd and border collie mix found himself in a shelter when he was just a puppy. He went through one failed adoption before he found his perfect family.

Now he lives his life to the fullest – and his owners hope that his positive energy and full-of-life personality can help others to do the same.

Brodie was just thirteen days old when he suffered the most heartbreaking form of abuse. His birth mom attacked him so badly that she left him permanently disfigured. The poor puppy had a badly broken cranium and face, as well as partial blindness in one eye, and the first few weeks of his life were spent bravely healing.

When he was well enough, Brodie was taken to Old MacDonald Kennels in Albert, Canada, where he waited patiently to be adopted. His injuries had left him with permanent facial disfigurement, but this didn’t put people off him (and how could it when he looks so darn cute?) Within no time at all, Brodie had been adopted – but sadly, that wasn’t quite the end of his story.

After just five months in his new home, Brodie was returned to the shelter because his owners felt that he was too hyperactive.

But luckily, Brodie’s perfect owners were just around the corner. When the shelter shared his pictures online, Amanda Richter and her boyfriend Brad Ames instantly fell in love.

“I looked at his photos every day and even cried a few times. We felt drawn to him for some reason,” Amanda told Metro UK. “We met him, took him for a walk and hung out with him for a few hours and ended up bringing him home the same day because the rescue really felt we were a great fit.”

Apparently, Brodie is as hyper as ever, but Amanda and Brad love him all the more for it! They also add that he’s a super-smart dog and can learn tricks really quickly.

“He’s definitely hyper but he is so intelligent. His brain is perfectly fine and he learns tricks within 10 minutes usually which tells me he is a smart boy. ‘He just needed patience and someone to be consistent. He gets better every week.”

Amanda and Brad have big plans for their clever pup Brodie, and they hope that through Brodie, they can positively impact the lives of many people with disabilities.

“We hope to train him to be a therapy dog one day so he can help other people with disabilities. We also hope that we can raise awareness for other special needs dogs and show people that just because someone or something looks different, they can be perfectly imperfect in their own unique way.”

What a lovely statement! We can’t wait to see all the amazing things Brodie achieves. For cute pics and pupdates, be sure to follow bestboybrodie on Instagram.