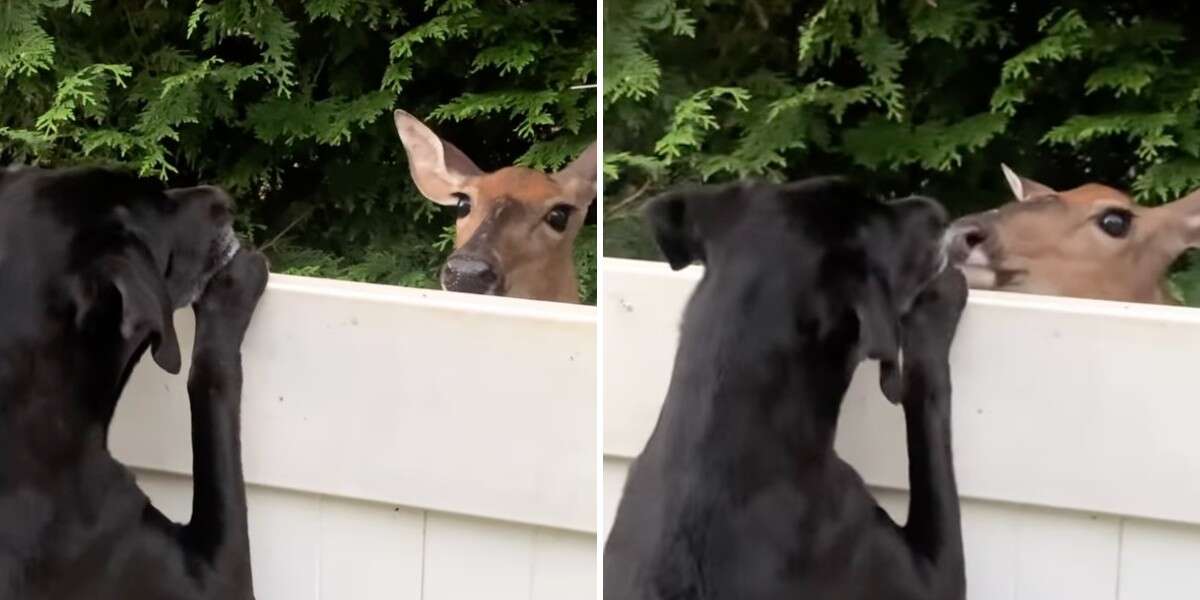 Interspecies friendship has long been recorded in history. This is especially true in different kinds of animals living under one roof.

Spending all day together inevitably creates a special bond among the animals. We’ve seen accounts of dogs and cats treating each other like family.

But what about animals not living together? A woman named Holly Faulconer one day noticed a deer coming by to steal some seeds from her bird feeder. Instead of shoo-ing the deer away, she found it amusing.

But not long after, the young deer, which she named Sassafras, started showing up for a completely different purpose. She found a friend in Holly’s dog named Huey.

They created a special bond.

Nine years ago, Holly rescued Huey, and they have been best of friends since then. Huey adores Holly so much that he is very protective of his furmom.

Knowing this, Holly was taken aback when her dog began exhibiting signs of wanting to get along with Sassafras rather than viewing the curious deer as a danger.

Huey felt at ease around Sassafras.

“Huey was a little confused at first and definitely cautious,” Holly recalled of how her dog initially acted around the deer. “I would just talk to them both and make sure they both felt safe. Slowly, they just started talking over the fence!”

They were able to warm up in no time and became friends. We’ve heard about various animals creating an immeasurable bond, but it’s quite rare to hear about a dog and a deer becoming friends.

Holly posted a video on Instagram of Huey and Sassafras bonding over the fence. She was able to capture the beautiful moment of the two animals spending time together despite the physical barrier between them.

As of writing, the post has garnered more than 147 thousand likes and 1,100+ comments. People are obviously touched by the beautiful friendship Huey and Sassafras have.

It’s the purest friendship of all.

They looked like they were having some serious catching up in the video. I wonder what their conversation is all about? Maybe they are trying to figure out how to take the fence out of the picture!

The video was so beautiful that a lot of commenters were wondering if everything was real! One commenter wrote, “Okay, after looking at this again, is this real? Did you really record this? Is that your dog? Did this really happen? Photoshop? Omg!”

To our joy, everything indeed is real, and it’s what Holly gets to witness every day. What a lucky woman, right?

Huey and Sassafras showed us that friendship knows no difference—such a beautiful lesson from a dog and a deer.

Check out the video below to see one of Sassafras’ visits.