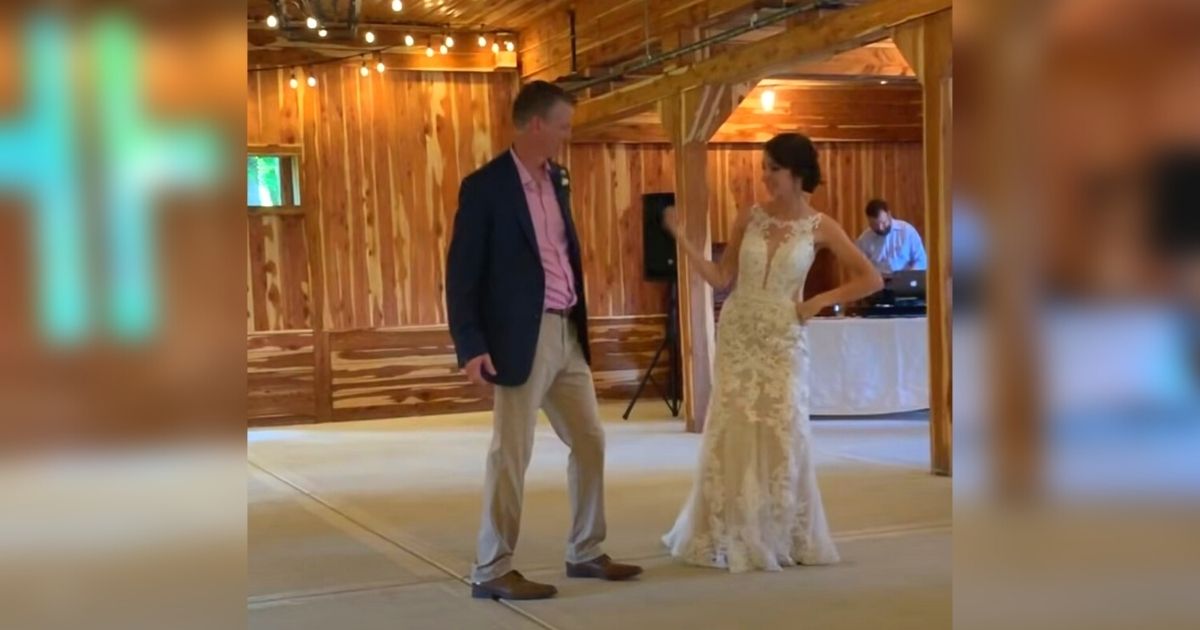 As a dad, it’s kind of your job to bite off more than you can chew to impress your children and give them unforgettable memories that solidify your bond.

That’s exactly what this dad did when he decided to ask his daughter to do a daddy-daughter dance mashup during her wedding.

Did I mention his daughter’s a trained dancer, and he, well, is not.

You have to give him credit for being such a good sport.

He planned it from the get-go.

Ken and his son Nathaniel began making a cell phone video recording after Ken’s daughter got engaged to her fiancé.

The video starts with a phone call from his daughter Natalie, who has some exciting news to share with her father and brother.

When Natalie called her father with the good news, the excited bride-to-be told him all about the romantic proposal but little did she know, her fiancé Peyton had already asked her dad for permission weeks before.

That’s when Ken got a hilarious idea. What if he asked his daughter to do a special father-daughter mashup dance during the wedding?

She was a trained dancer who’d been dancing since the age of two after all.

There was one little thing.

Ken is a much better mechanic than a dancer.

Ken knows about cars, not dancing.

But even though Ken knew it might be a little embarrassing for him, he decided to go through with the idea knowing how much it would mean to his daughter.

When the wedding day came, they filmed the whole thing as the nervous dad got ready to cut a rug with his daughter.

It starts off with them dancing to a slow song together before Ken throws on the shades and they break it down to a country-pop song.

Right off the bat, the order of the dance move went right out of Ken’s memory. We can’t blame him, though.

There’s nothing like the pressure of a crowd to cause a momentary lapse in memory.

Ken gives it his all.

What makes this video so awesome is the fact that Ken is giving it all he’s got, but dancing just isn’t his forté.

So what if he forgets the routine right in the beginning? He pulled off the recovery like a pro.

The father-daughter duo goes through tons of popular songs, from “Apache(Jump On It)” by Sugar Hill Gang to “September” by Earth, Wind & Fire, and “Single Ladies(Put a Ring on It)” by Beyonce, they dance to a little bit of everything.

The dance was a complete surprise to everyone, including Ken’s wife.

The father-daughter dance was kept secret from everyone besides Ken and Natalie, he explains in the YouTube post:

“We picked all the music together, I mixed it, she choreographed it (making the dance easy enough for me to do) and we pulled off the biggest surprise ever! No one knew – not even my wife! ” Ken says in part of the caption.

To see Ken put himself out there doing something he’s not necessarily good at for his daughter should be an inspiration to all dads out there.

But if you want to see something he’s good at check out his YouTube channel Spyder Garage.

In a rare public appearance with his girlfriend Alexandra Grant, Keanu Reeves appears positively radiant.
Actor Keanu Reeves has long been considered to be a
0 162