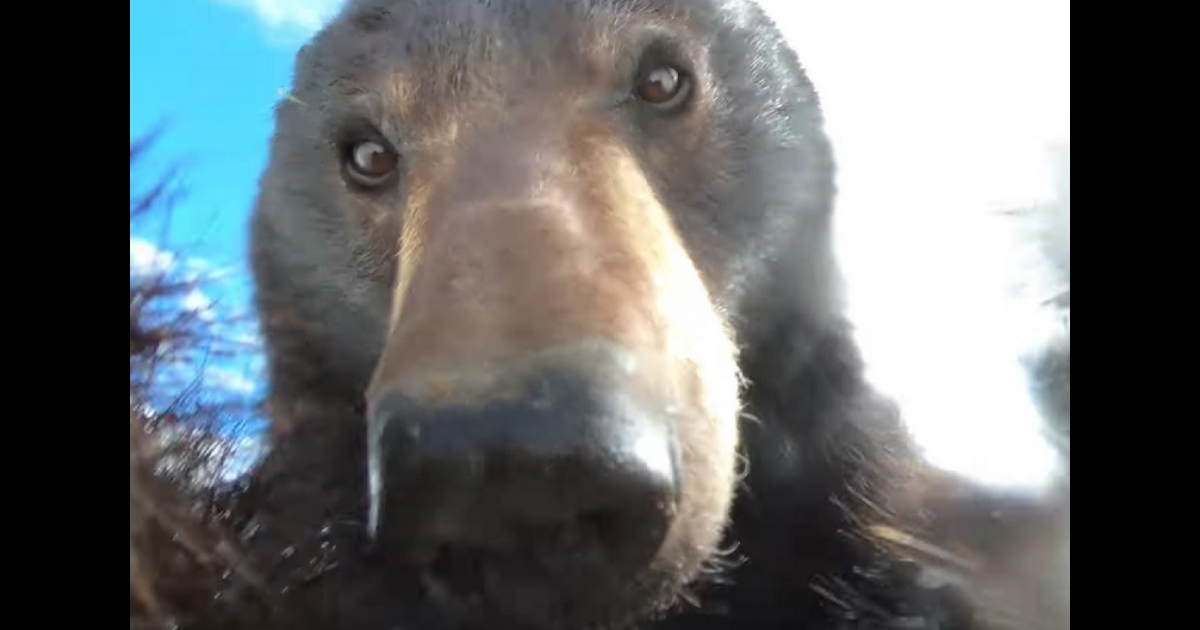 A man named Dylan Schilt was out archery hunting in Laramie, Wyoming when he found an old GoPro camera. So naturally, he took it home and charged it up.

He was curious after all, but curiosity didn’t kill the cat this time.

Once the GoPro was all charged up, Dylan played back its recordings and was surprised and amused at what he saw.

It had more than four minutes of footage. And what greeted him was an American black bear playing with the GoPro by batting it around with its paws and carrying it around in its huge mouth.

There is an abundance of snow, but the surrounding trees were fairly free of them.

The first minute and a half of the footage has the bear pushing the camera around with its paw before attempting to pick it up with its mouth.

After a few hilarious attempts, the bear manages to do so, even turning the front of the camera towards its face which made it seem like it was recording itself for a vlog.

“Hands down the craziest thing I’ve ever found!” Schilt says.

Now there are many reasons why someone could accidentally lose a GoPro. They’re tough little cameras so people take them on hikes, biking, adventuring, and out on many other activities.

But losing one means you’d probably never find it again since GoPro cameras are pretty small.

People on Twitter began poking fun at the footage, turning the bear into your typical vlogger.

And of course one can’t forget the usual lines used by content creators.

That’s a big teddy though.

Some users went ahead and made memes out of the bear.

Well ain’t that the truth?

This bear made himself famous and he doesn’t even know it.

He does have a cute face but it’s not like anyone’s just going to approach him in the hopes of cuddles. Just take a good long look at that mouth.

What big teeth you have!

Viral Hog posted the footage on YouTube with one viewer commenting,

“This is the only way I ever want to suddenly find myself staring at the inside of a bear’s mouth. Also, kudos to the bear for capturing some really great shots of the scenery!”

No way did this bear know how to operate that camera. Unless he’s a particularly smart one.

Check out Dylan’s discovery in the video below!