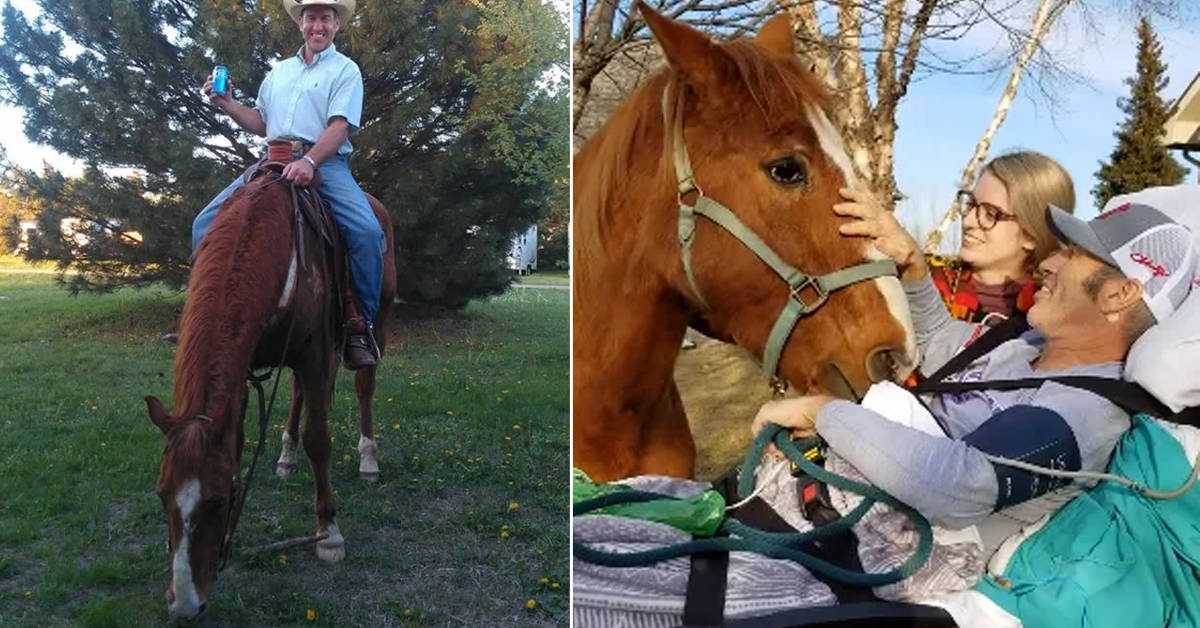 Such is the unspeakable bond between man and beast.

In a farmstead in Wichita, Kansas, a heartwarming reunion took place. Kevin Adkins hasn’t seen his favorite horse Vic in a while and he wanted to make sure that this time he does.

After all, there’s no knowing when they’ll see each other again. Most especially that the cowboy is going to the great green yonder where Vic cannot follow.

The reunion was recorded and posted online.

In the video, Adkins was wheeled into the driveway, with an ambulance sitting just by the street. Adkins was lying on a gurney and wired on him were different devices that track his health. The 55-year-old Kansas cowboy has been fighting cancer for three years.

And in those three years, he hasn’t forgotten his companion. Waiting by the ranch is Vic, a horse he took great care of for nearly two decades.

Being terminally ill, seeing Vic was one of Adkins’ last wishes.

Their family friend and owner of D&J Ranch, Jennifer Wadley, only have good things to say about their bond.

“They’ve been partners for all these years,” said Wadley to KAKE. “It could be pouring rain, it could be snowing, it could be hotter than heck, he was always here.”

The reunion was made possible by Adkin’s friends and family.

Their friendship was very much apparent as his daughter walked Vic towards the gurney. His health might be failing but you can see Adkins’ spirit glow the moment he saw the horse. He greeted Vic with gentle strokes, probably saying his last words to an old friend.

When Adkins got hospitalized, he was robbed of the days he could spend with Vic. Then, after realizing that he hasn’t much time left, he requested to see Vic one last time.

The following day, Adkins passed away.

His friends at the D&J Ranch shared how wonderful it was to have Adkins around the ranch.

“He would be out here every day, and he would always look for you so no matter where you were he was looking for you so he could wave and smile,” said family friend Megan Hoover-Wadley to KAKE.

“We loved him dearly and he will be missed so much by all.” D&J Ranch said in their Facebook post. “His face was one that we saw almost every day and he always had a smile. He never hardly missed a day with his horse Vic, even with the tremendous pain he was dealing with towards the end with his cancer.”

It was not the last time that they spent time together.

Vic became an honorary pallbearer at Adkin’s funeral – a way for old friends to say their final goodbyes. As for their friends and family, seeing their bond was such an emotional and moving spectacle.

“It was truly a love story between a man and his horse,” said Wadley to the news outlet as she held back tears, “It was just an unbelievable friendship.”

To celebrate his life and honor his memory, Adkin’s friends and family set up a Kevin B. Adkins Cowboy Relief Fund. The fund will help other families in their community.