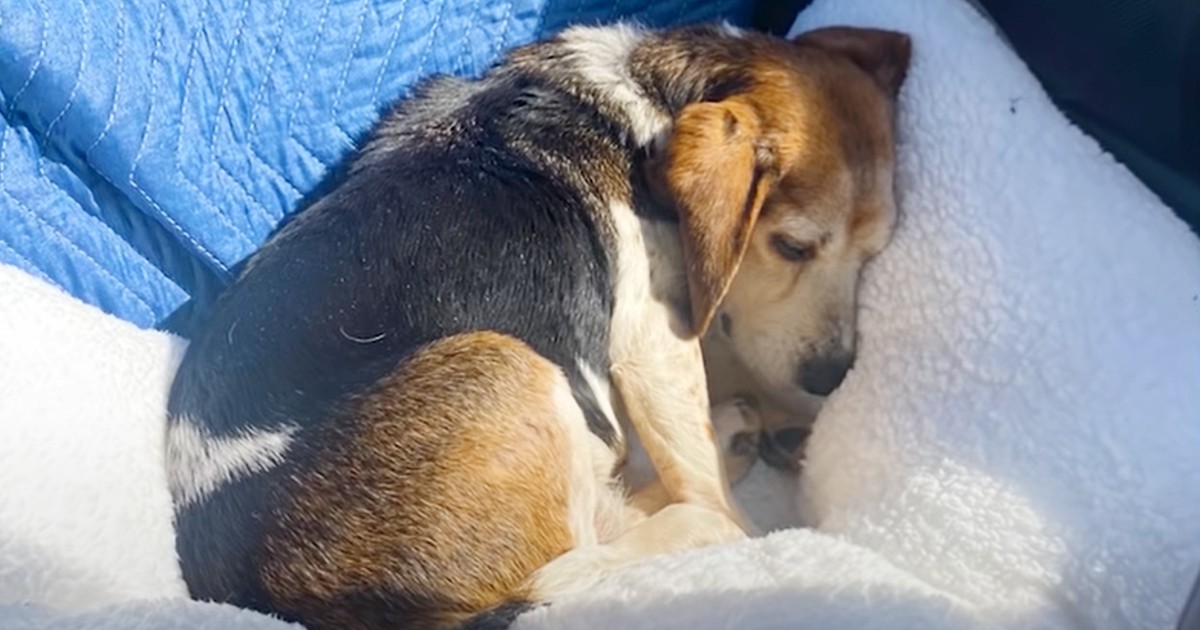 Being a stray dog in a shelter while waiting to be adopted is tough. The difficulty is only made worse by getting older.

The unfortunate truth is that so many people prefer puppies or young pets. The demand for elderly dogs isn’t very high. That is so sad because elderly dogs are so full of love. They have so much love to give from all the years they were waiting for their forever home to come.

However, senior dogs without homes are common.

One senior beagle, who was in desperate need of a new home, was being given away for free on Facebook. Her name is Maple.

When Maple was posted on Facebook, she was not in a good condition at all. She had an unpleasant smell, long, overgrown nails, and a disheartening appearance. Even so, a couple was more than ready to come and get her. Taylor and her boyfriend hurried to adopt poor Maple.

The couple was determined to find her.

According to the post, Maple had to go by the weekend, so Taylor and her boyfriend hurriedly traveled for three hours to get her and take her home.

Taylor realized right at once that Maple’s life had not been a simple and easy one. No wonder the senior dog appeared to be extremely relieved to have been saved.

Maple’s wait is finally over.

“We brought her into the car and onto a comfy bed. She just clinged onto that bed,” Taylor recalled. “She just looked terrified. Who knows what she went through?”

Maple slept for the first few days at her new home, all “curled up in a little ball.” She was not accustomed to having one. Nevertheless, Maple gradually began to break out of her shell and slowly adapt to her brand new life.

Cooper, Taylor’s other rescue dog, played a significant role in that adjustment. When Cooper and Maple first met, they instantly clicked. He guided the aloof senior dog in this crucial transition.

They became the best of friends.

“She started off as this really, really closed-off and really shy dog, and now she wants to explore everything,” Taylor happily reported. “I think the biggest thing was just being so affectionate with her and just giving her all the love, all the treats, all the belly rubs.”

These days, Maple’s life has changed significantly as she spends her time spending quality time with her new best buddy. She was surrounded by the people and animals she cares about the most as she celebrated her one-year “Gotcha” day anniversary!

It’s remarkable how someone’s life can be completely transformed by the power of love, especially that of an animal. For Maple, it was truly worth all the wait.

Although it may have been a bit late, we are happy Maple is finally in the arms of people who love and adore her. She deserves it all!