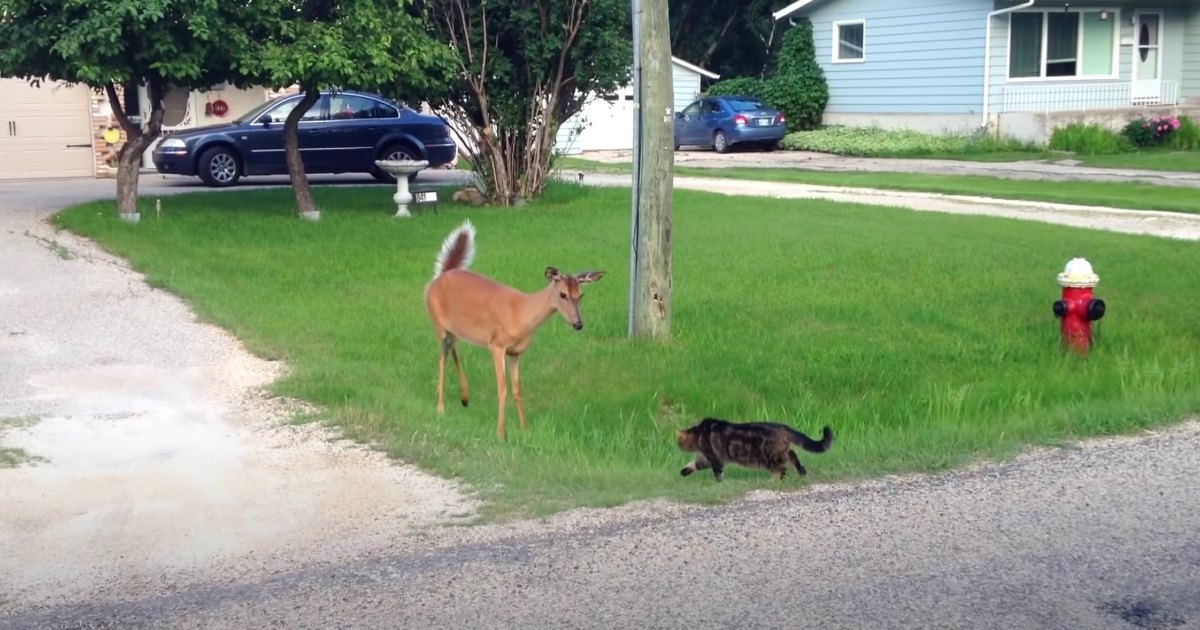 Jelly the cat and her human were out for a walk in Winnipeg, Manitoba, a Canadian city, when a wild deer came out of the trees.

Both animals seemed nervous but curious about each other and they decided to spend some time checking each other out. Jelly slowly approached the young white-tailed deer who backed up from the incoming cat but continued to look intrigued.

The biggest fright the deer seemed to get actually came from Jelly’s human calling her back, not from the cat itself.

Both creatures remained calm but ready as they engaged with each other, the deer occasionally stamping its feet as if to say “That’s too close for comfort.” and Jelly then backed off. When the cat decided she had had enough and it was time to continue on with her walk, the deer wasn’t ready to end their encounter and ventured a little closer to the feline for a sniff.

Jelly was only too happy to oblige and turned around for a closer encounter.

Jelly’s human is heard saying, “I think he’s a little afraid of you, but he wants to know you.”. She obviously kept a steady eye on the situation and would surely have intervened if there was a need to do so. Luckily for her and for Jelly, the deer was only curious and meant no harm to either of them.

Having different species interact with each other is nothing new in the animal kingdom, it is called ‘symbiosis’.

There are four main types of symbiotic relationships known as ‘mutualism’, ‘commensalism’, ‘parasitism’, and ‘competition’. Mutualism is what the relationship between Jelly and the deer would be classified as as both species benefits by the meeting.

While there is no actual benefit going on in this video, they will both leave the situation in a positive manner.

In all the other types of symbiotic relationships, one of the pair would be benefiting in some way off the others misfortune. Jelly and the deer both get to leave their meeting a little wiser about the world around them and what some of the other creatures near them are like.

Cats and deer are both known to be calm, relaxed, and social creatures so it is no surprise that these two were interested in each other.

Deer have also evolved so that they can sense danger before it gets too close so that they can run away in time. It is a real testament to Jelly, and her owners, personalities that they were able to get so close to the deer without it fleeing.

Maybe next time Jelly is out for her walk she will get to see her deer friend again and they can grow their bond even stronger.

Watch Jelly the cat check out her new deer friend in the video below.